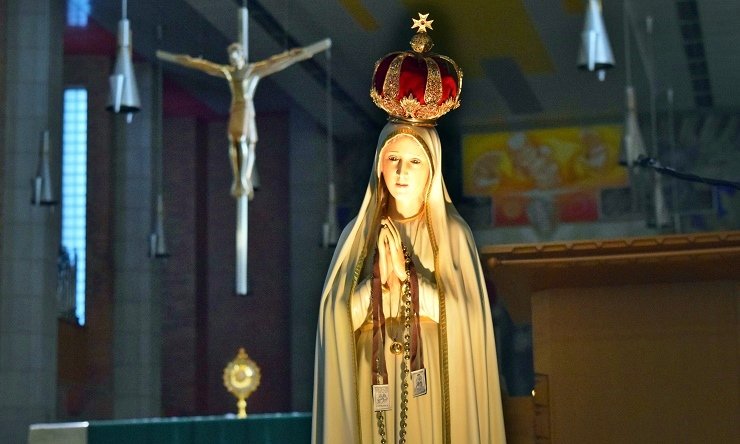 July 13, 2017, marks the 100th anniversary of the most controversial apparition of Our Lady in Fatima, Portugal.

What she did that day inspired many to convert but provoked others to reject the faith out of hand. It made some people a little nutty and won the begrudging respect of others.

July 13 was the day Our Lady scared the daylights out of three shepherd children by showing them hell and sternly warning them about a second global war and a new age of martyrdom.

But the surprising — and surprisingly harsh — July 13, 1917 apparition changed the faith of the Church in our time.

First: July 13 returned hell to the center of Catholic consciousness.

Little Lucia dos Santos was 10 when Our Lady of Fatima began to appear to her every 13th of the month starting in May, 1917, along with her cousins Francisco and Jacinta Marto, 8 and 7.

But in July, instead of just exhorting the children to say the Rosary and pointing them to heaven, she showed them a terrible sight.

“We saw as it were a sea of fire,” Lucia wrote. “Plunged in this fire were demons and souls in human form … amid shrieks and groans of pain and despair, which horrified us and made us tremble with fear.”

To give Our Lady of Fatima credit, the vision of hell only happened after a year of preparation, including visits by an angel and much reassurance about heaven. But the vision so badly rattled Jacinta, especially, that it seemed to change her personality utterly.

The only thing that would make this vision okay, and not an example of emotional abuse, is if hell were a real place and we were in eminent danger of ending up there if we don’t do something drastic.

Second: She reiterated the most unpopular — and most important — message of Christianity.

Yet every pope from Pius XII to Francis has said “the sin of the century is the loss of the sense of sin.”

The refusal to repent — the belief that sin doesn’t really matter — is at the heart of the major moral disasters of our time, from abortion to human trafficking, from the pornography epidemic to the urban violent crime rate. Those who see no wrong do terrible things.

Our Lady of Fatima’s vision of hell is an absolutely necessary corrective to the presumptuous expectation that we are all going to heaven no matter what. It is true that God wants to forgive everybody. But one thing stopshim: We don’t repent.

“This war will end,” Our Lady of Fatima told the children in July, “but if men do not refrain from offending God, another and more terrible war will begin.”

Whatever they understood about the particulars, the general sense of this message was clear to the children: War isn’t an occasion for God to reward victors, but to punish sin.

The “reward” paradigm had existed for a long time in Christian history: From Charlemagne to Joan of Arc, from Notre Dame des Victoires to the Conquistadores. Every Christian culture had their Robin Hood and King Arthur figures: Heroes of the unconventional virtues of clever violence.

But Our Lady of Fatima poured cold water on all of that. Martial virtues are real, but they are an example of God bringing good out of evil — not of God’s will being won by violence.

For that matter, Our Lady of Fatima also level-set our understanding of martyrdom.

In the at-home movies era, many of us are only now watching Silence by Martin Scorcese, which follows a Jesuit’s disillusionment as he looks for glory in the persecutions of Japan and finds soul-numbing horror instead.

Our Lady of Fatima taught that lesson 100 years ago.

The children saw a vision of the pope “half trembling with halting step, afflicted with pain and sorrow,” praying for the corpses he stumbled past until he was himself shot. Our Lady knows that in heaven martyrdom is glorious — and that on earth, it is painful and sad.

The meaning of all of this was not lost on the three shepherd children.

They learned that it was absolutely urgent that they console Jesus, convert sinners and commit to Mary.

July 13 is only part of their story — a story that includes far more consolation than condemnation and was meant for every generation, including ours.