From Basketball to Belize: Magazine Features Another Raven Vocation 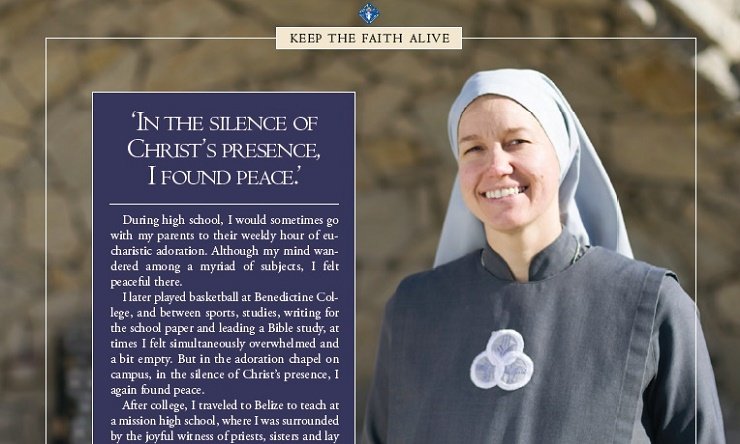 Sister Mary Elizabeth Albers, SOLT, class of 2004, is featured in the March issue of the Knights of Columbia publication. The 2-million circulation magazine features a vocation story on the back of each issue. In October, Little Sister of the Poor Sister Bernadette Spelic — who graduated in 2013 as Megan Spelic — was featured. (Click here for Sister Bernadette’s story, including Pope Francis’s surprise visit to her community in Washington, D.C.) 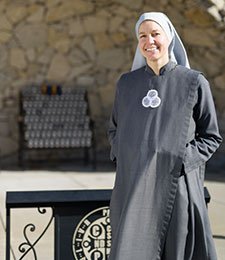 She also keeps her ties to Benedictine College strong. The picture of Sister Albers used by Columbia magazine was taken at Mary’s Grotto on campus, and she was one of 13 Benedictine alumnae and current students at the GIVEN Forum on women’s leadership held in Washington, D.C., last June.

Sister Mary Elizabeth sent a picture of the group of Ravens in D.C. — which included five religious sisters and Gregorian Fellow Lauren Benzing — singing the Raven fight song, complete with hand motions. (Benzing was featured at the Gregorian blog in 2015 and last week.)

She was also pictured with Rocky the Raven at the SEEK Conference, where Benedictine College was a sponsor and sent 360 students,  18 faculty, staff and administrators, including more than half the college’s leadership team and five monks and sisters from Atchison’s Benedictine communities (find that story here).

Siser Mary Elizabeth’s vocation story in Columbia is titled ‘In the silence of Christ’s presence, I found peace,’ and it features her experience at Benedictine.

Albers says in the story she first found peace in prayer when she accompanied her parents to the perpetual Eucharistic Adoration chapel on campus in high school. It was a good foundation for her college life, she said:

“I later played basketball at Benedictine College, and between sports, studies, writing for the school paper and leading a Bible study, at times I felt simultaneously overwhelmed and a bit empty. But in the adoration chapel on campus, in the silence of Christ’s presence, I again found peace.”

She discovered her vocation most fully, however, on a mission trip after college to Belize, “where I was surrounded by the joyful witness of priests, sisters and lay families of the Society of Our Lady of the Most Holy Trinity.”

She now lives in community with the Society of Our Lady of the Most Holy Trinity in Corpus Christi, Texas.

Her experience in Belize has been given national attention once before — in a 2005 story in the National Catholic Register about college volunteerism.

Noting that she was from Benedictine College, the paper reported, “As graduation drew near, Mary Beth Albers knew God was prompting her to serve him in a special way.”

“I felt called to do something that required me to trust God and go outside my comfort zone,” the 23-year-old told the Register.

She shared how the experience changed her:

“I didn’t know anyone. There was no electricity, no running water,” she said. “It was scary at first, never having taught before,” she said, but, “Seeing the people, how simply they lived, but how joyful they were, strengthened my faith.” She wrote in her journal: “There is nothing constant in my life except for Jesus.”

And, from Benedictine College’s perpetual Eucharistic chapel to her vocation today, the same constant remains.

#Given2016, #SEEK2017, Columbia magazine, Eucharistic adoration, GIVEN, religious vocations, SEEK, Society of Our Lady of the Holy Trinity, Vocations