How Religious Women Changed Our World 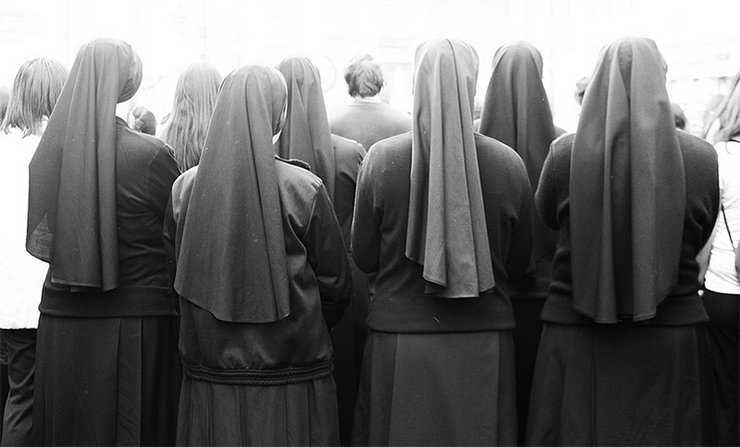 The Feast of the Presentation is almost upon us and it is time to pray for more nuns.

My family has prayed daily, “For more priests and more religious,” for years, but when we did, I kind of always thought, “especially for more priests.”

Priesthood is the vocation whose lack we feel most strongly, so we start to think of “prayer for vocations” as meaning “prayer for more priests.” That’s a big mistake.

I’m not sure what changed my mind. Maybe knowing more sisters up close, in the Benedictines of Atchison and the many religious who attend Benedictine College. Maybe it’s my own daughters’ discernment of their vocations.

Whatever it is, I now see that the world would be a very different place without nuns.

First, nuns prevented evil from eclipsing the world in the 20th century.

Let two sisters in particular stand for what sisters did.

I agree with Joseph Bottum’s 2005 essay that the Fatima visionaries had as big an impact in world politics as anyone else in the 20th century. Because of them, Catholics all over the world prayed daily for the conversion of Russia.

Their prayers were answered literally in 1989, but even before then, the message of Fatima spoiled the efforts of elite secular opinion that wanted to give communist atheism a chance. That never worked, because Our Lady of Fatima had already enlisted every Catholic in the world in a spiritual battle against the forces of secularism.

Second: St. Teresa of Calcutta. She defined Catholicism in the 20th century for many people, resetting expectations about the how the poorest in our midst have to be treated, and whether godlessness or grace define the world.

Consider a poem Robert Louis Stevenson wrote about sisters in a leper colony:

To see the infinite pity of this place,
The mangled limb, the devastated face,
The innocent sufferers smiling at the rod,
A fool were tempted to deny his God.
He sees, and shrinks; but if he look again,
Lo, beauty springing from the breast of pain!—
He marks the sisters on the painful shores,
And even a fool is silent and adores.

Mother Teresa did for the world what Sister Marianne Cope did for Robert Louis Stevenson: Reframe poverty as an opportunity for faith rather than a mark against God.

Lesser Mother Teresas did the same thing worldwide, teaching generations of schoolkids and immigrants how to think like a Catholic despite the world’s expectations. From their classrooms rose civil rights leaders, pro-life leaders and a tsunami of charitable workers.

St. Thérèse of Lisieux died in 1897 but her writings’ impact was felt everywhere in the Church in the 20th century. Her Little Way defined the Catholic daily vocation of “doing small things with great love” and led in a direct line to the Universal Call to Holiness of Vatican II.

Consider the immense amount of catechesis contained in the briefest part of the Divine Mercy chaplet Faustina gave us: “For the sake of his sorrowful passion, Have mercy on us and on the whole world.” To pray that is to learn that Christ’s sacrifice is once for all, that sin is a tragedy for us as well as others, but that we can help heal it.

Mother Angelica was a powerful writer of unexpected spiritual depth, but she belongs on this list of giants because she dared give the Catholic faith a place on the most powerful medium of the 20th century: television.

These women transformed how Catholics interact with our workplaces, our families, with God and with the culture. And each was defined by the vows she took in a convent.

Third, sisters transform us by the witness of their life and prayers.

A museum in Ohio recently featured an ad by the Sisters of the Presentation of the Blessed Virgin Mary in Aberdeen, South Dakota:

“We offer you no salary; no recompense; no holiday; no pension, but much hard work; a poor dwelling; few consolations; many disappointments; frequent sickness; a violent or lonely death.”

The fact that many women joyfully take up that challenge teaches us something that would be much harder to figure out if they didn’t: God is real, his will is the only true joy, and he awaits his friends in heaven.

What will the next 100 years be like? Pray for more sisters to show us.