It all Started With an Atheist and a Drumline … 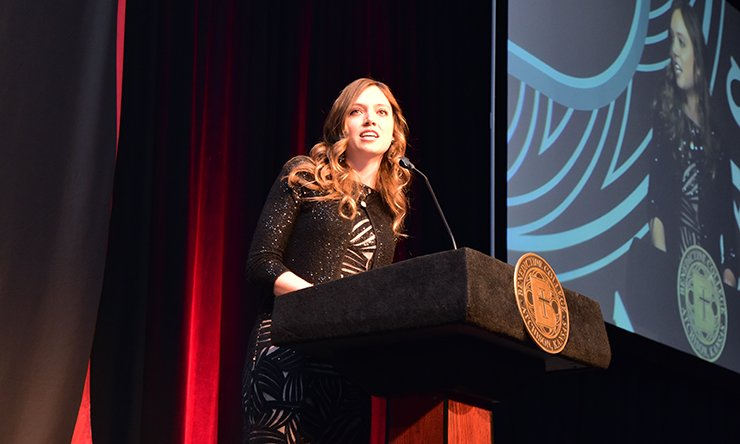 This year’s Benedictine College Scholarship Ball broke records in attendance and money raised. That is in part thanks to its featured student speaker: Gregorian Fellow Lauren Benzing.

“Lauren embraces community, faith and scholarship,” said President Stephen D. Minnis, introducing her. “She is the first All-American cross country runner in our history and she was a member of the National Championship 4×800 team, the first national championship team since 1967.”

He listed her activities: vice president of Ravens Respect Life, a One Love Ministry Chastity Speaker, the coordinator of Benedictine’s chapter of Love & Responsibility, one of three interns chosen by the U.N. organization World Youth Alliance, and an intern at the Theology of the Body Institute in Pennsylvania.

“She has spoken around the country including at a U.N .committee, Texas A&M and NYU,” he said.

The audience soon saw why, as she told her personal story about transferring from a Division I athlete to Benedictine College.

“It all began in DC during the 2014 March for Life. Traveling as a freshman from Iowa State University, I had two very pivotal experiences. The first was marching alongside a drumline of exuberant college students and wondering, what school is so passionate about the pro-life cause that they bring their drumline? I asked around was told ‘Oh, that’s Benedictine College.’

“Well, I had never heard of Benedictine College, but their enthusiasm struck me. A seed was planted. The second pivotal experience on that trip was a conversation with an atheist, who seriously challenged me in my Catholic beliefs, arguing that religion was nothing more than an agent of social control.”

“My heart was shattered. It was a huge wakeup call that left me truly examining my life and my priorities … A few more months of wakeup calls and I realized I was being called to study Theology & Philosophy. The idea of transferring to a Catholic college entered my mind, but it was terrifying.”

She continued, “I was inundated with the question ‘What are you going to do with that?!’ Little did I know, the answer would involve interning in New York City and Philadelphia, negotiating a declaration at the United Nations, leading an international summer camp, giving talks across the country and starting the Love & Responsibility formation program.”

She described what it was like to win the championship, but said, “I’m thankful that I didn’t have to pick between being an athlete and being a student — I have fond memories of eating dinner with Dr. Blosser and his family, debating about St. Thomas’ Summa Theologiae at Snowball with Dr. Rioux & Dr. White, discussing Phil Psych over coffee with Dr. Madden, dreaming and scheming in Dean Wurtz’s office about plans to implement UN Dialogue training and fertility education.”

It was those Gregorian Fellows discussions with Joseph Wurtz that made the biggest impact, she said.

“Looking back, it was during those inspirational meetings that I first desired to do big things for God as a leader. It still floors me that a small-town Iowa girl from a tiny little college in the middle of nowhere Kansas ended up in New York City, collaborating with youth from around the world and witnessing to university students. Let me tell you, that was roughly a thousand miles outside my comfort zone. But it happened because of people like Dean Wurtz, who remind us that we are not called to comfort. We are called to greatness. “

“I imagine a world in which people realize that their life is not the product of chance, but the fruit of a personal call and a personal love. I dream of a generation with the courage be transformed by this love. This dream was planted when I encountered an atheist and a drumline.”