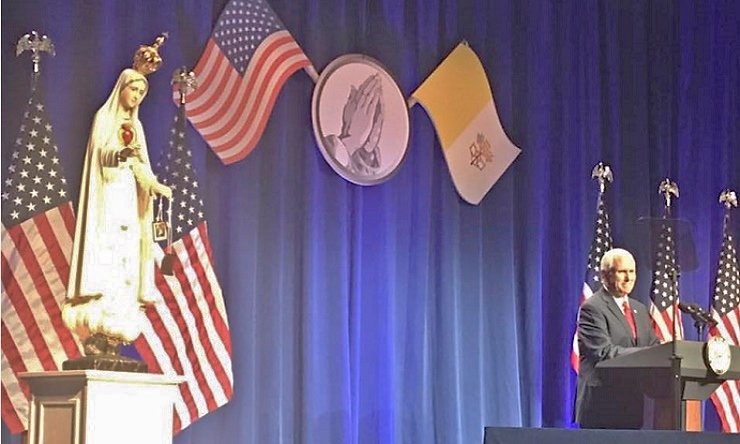 Pence stressed the importance of Catholic identity to the history of America, even while acknowledging his own status as a former Catholic.

“I was not only baptized in the Church, but I was confirmed, and I stand before you today as Michael Richard Christopher Pence,” he said.

Benedictine College was a sponsor of the June 6 Washington, D.C., event that gathered Catholics in the Marriott Marquis in Washington, D.C. to pray for America and hear encouragement from American Catholic leaders.

“This honestly feels like coming home to me,” Pence said of the event, adding that his mother would be “so proud.”

He drew laughter from the audience by saying, “My official biography says I was raised in a large Catholic family. I’m actually from a mid-sized Catholic family — only six children in the family I grew up in.”

He described being “rousted from bed early” when other altar boys called in sick for Sunday Mass at the Catholic church near his childhood home in Columbus, Ohio.

“Being one of four boys was very convenient for Father Gleason,” he said, “because he could call my dad in a pinch and have a full team of altar boys ready for any Mass.”

“But it was special,” he said. “The hymns and liturgies of the Catholic Church are the anthems of my youth.”

Catholic identity in public life was a theme repeated several times that morning.

Military Services Archbishop Timothy Broglio was the keynote scheduled to speak at the breakfast before Vice President Pence’s appearance was announced.

“A good Catholic is a good American because the practice of virtue also leads to good citizenship and there is no dichotomy between faith and life if we cultivate and practice virtue,” he said, citing late Washington Cardinal James Hickey.

Mother Olga Yaqob, an Iraqi nun who moved to the United States, became an American citizen, and founded the Daughters of Mary of Nazareth, also spoke.

She recounted acts of charity she had accomplished in war-torn Iraq, and said those she helped often asked why she served them. “My answer to them was always the same,” she said: “my love for God and my love for his children.”

But Pence was the most anticipated speaker at the breakfast.

“Our history books are filled with the names of the sons and daughters of the Catholic Church,” he said. “American Catholics have built everything that matters in this country — built families, built businesses, founded hospitals, ministered to the poor, become leaders in public life, established world-class institutions of higher education.”

One goal of his speech was to encourage the more than 1,000 Catholics at the event to support President Trump.

He described President Trump’s positions on religious liberty, abortion and other issues.

Pence told the audience, “I can assure you this president believes that no American should have to violate their conscience to fully participate in American life.”

He said that a month earlier, on May 4, the Little Sisters of the Poor were present at the White House when Trump signed an executive order on religious freedom.

The sisters, who sat in a table near the center of the ballroom, received a standing ovation.

On abortion, Pence said, “President Donald Trump stands with the most vulnerable — the aged, the infirm, and the unborn.”

His biggest applause line of the morning, though, was when Pence said, “The President actually has empowered states to withhold federal funding from abortion providers, and I’m humbled to say that at the President’s direction, I had the privilege of casting the tie-breaking vote in the United States Senate that allows states to defund Planned Parenthood.”

Pointing out that Trump was appointing pro-life justices “to the federal courts at every level” Pence said: “Since day one of this administration, President Donald Trump has been keeping his promise to stand for life, and life is winning in America again.”

Benedictine College’s guests at the event included Brad Hoagland, director of policy plans and requirements for the White House military office and Eric Ueland, Staff Director at the U.S. Senate Budget Committee, along with their wives Jill Hoagland and Cathleen Ueland. Their daughters, both named Brigid, manned the college’s booth at the event.

Also at the college’s table were Tom Hoopes, editorial director of the Gregorian Institute, and Candace McTeer, who runs the Ropke-Wojtyla fellowship at Catholic University of America. Benedictine College senior Catherine Francois has been chosen as the 2017-2018 Ropke-Wojtyla fellow in the program.