Mourn Them, Defend Them, Champion Their Cause 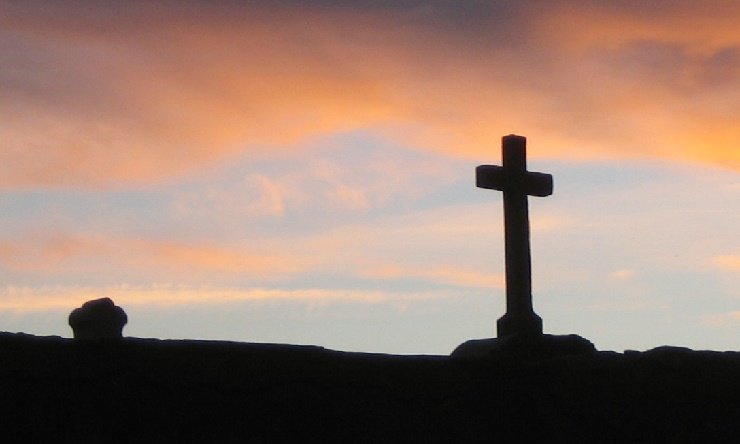 Editor’s note: To commemorate today’s feast of Our Lady of Sorrows, we present Father Habiger’s words given at the Gate of Heaven Cemetery in Bonner Springs Sept. 9.

We are gathered here to pay our respects to the mortal remains of those who have gone before us in the course of life. We are focused especially upon those unborn children, whose lives were terminated by abortion. Normally, their dismembered body parts would be laid to rest here, but today most of the victims of abortion are immediately discarded as rubbish in a garbage disposal unit or in dumpsters.

Some people may ask why were are here today at this cemetery, Gate of Heaven. They may claim that the abortion issue has been settled by two Supreme Court decisions (Roe v. Wade in 1973, and Casey v. Planned Parenthood in 1994), and that we should simply accommodate ourselves to the law of the land. But that is not an accurate, or fair, description of the matter.

Abortion is not a settled matter. Abortion deals with human life, with a real and completely distinct person. Persons have human rights, that were given to them the moment God entrusted a spiritual soul to the first cell of their bodies, called the zygote, at the moment of their conception. Even before this event, from the beginning of time, God had each of us in His mind and heart when He called the universe into existence. We are not an accident. Human dignity and human rights are an endowment, given by God, and not a privilege, granted by the State. If the State does not recognize this, then it will abuse its power by claiming absolute control over the people it rules.

We have seen horrific human suffering and tragedy over the past century, with two World Wars, and their horrors of concentration camps, prisoners of war camps, indiscriminate bombing of civilian centers, and the slaughter of troops on either side of the conflict. We have seen inhumane medical experiments performed on prisoners in concentration camps. We have seen what happens when an entire race, ethnic group, or undesirable grouping of people are deemed unworthy of living. We have seen what happens when a person is no longer regarded as a person, but is reduced to a mere commodity that can be used for any ends those who hold power over them choose to exploit.

How did this happen? How could the leaders of National Socialism, or Marxist Communism, gain the approval of their people to do such atrocities? These atrocities did not happen overnight. No, they were methodically advanced and promoted by leaders who wanted the approval of the people at large to accept their perverted strategies. These promoters used every argument they could find to persuade the citizens of a nation. They appealed to convenience, to prejudices, to pragmatism, and to human greed.

The State of the Issue

Now consider what is taking place in our country today. We methodically destroy by abortion one out of every four newly conceived human beings. The Supreme Court twice has decreed that the Constitution grants the right to a woman to abort her child. Promoters of abortion, like Planned Parenthood or radical feminist groups, defend and encourage women to choose either to terminate, or to allow to continue, the newly conceived life within them. They say the unborn baby is not a human being. And even if it is, it has no rights and no protections from civil law.

They say that the woman should have control over her body, while denying the fact that the baby has its own completely distinct body, while being totally dependent upon his or her mother during the pregnancy. They say that men and women should have all the sex they want, without having to accept the responsibility of their acts which were designed for procreation. They say that women cannot advance their status unless they have complete control over their biology, and thus be able to destroy an unwanted pregnancy.

The Second World War claimed 407 thousand American lives. To date, freely chosen abortion since 1973 has claimed 59 million American lives. And every other country could relate the same disproportionate figures. This is the same figure as the total number of people killed during WWII.

No, abortion is not a settled issue. There is too much at stake here. We cannot accommodate ourselves, or get used to, this grave social evil. We cannot pretend that legal abortion has not caused great distortions to our nation, and to everyone involved in this very evil choice and deed. We cannot forget how once this country accepted the evil of slavery. It accepted a way of life whose economy depended upon the sweat and tears of human slaves. Human greed and selfishness are very difficult obstacles to remove from the habits of a nation. We cannot forget that a bench of 9 lawyers have made horrible decisions in the past, such as the Dred Scott decision. We cannot forget that our form of democratic government is designed to be controlled by the governed, and that the citizens have a duty to make their values known and implemented by their representatives in the government.

That is why we are here. That is why groups exists like Planned Parenthood Exposed. We are simply facing a real problem that won’t go away, despite all the rhetoric and self-serving arguments that are offered in its defense.

So what can be done to correct the situation?

The first part of the solution is prayer. We pray that God, the Author of all life, will change the hearts of anyone who defends abortion. “Can a mother forget the baby at her breast and have no compassion on the child she has borne? Though she may forget, I will not forget you!” (Isa 49:15) God can soften the hardest of hearts. Thus, we are here to pray.

The second part of the solution is to explain the full humanity, and the personhood, of the unborn child just from hard biological facts that cannot be denied. The first cell, the zygote, which contains the 23 chromosomes of the mother and as many from the father, is the most complex cell of any organism. Its DNA has more genetic information than 15 sets of the Encyclopedia Britannica. Here is the blueprint that will direct the coordinated growth of the organism throughout its entire life. This cell is distinctively human; it is distinguishable from the zygotes of all related organisms. And each zygote is highly personalized; there are no exact replicas, not even among identical twins.

The zygote develops into an embryo, becomes a fetus, and then a baby, which leads to all the other stages of development that we know so well by experience. The organism that you and I are today, is the same that went through all of these stages, beginning with the zygote.

The third part of the solution is to reflect upon the implications of what happens when we turn against any segment of human beings, and allow them to be degraded or destroyed at the whims of some people. If we allow the weakest among us — the unborn, the defenseless, the poor, the handicapped – to be exploited, then we open the gates to destroying still other groups. Now we are facing such crimes as infanticide and euthanasia and growing human embryos for experiments and body parts. Can’t we learn from past mistakes with slavery, with the Nazi doctors and their forced experiments on human victims?

A fourth part of the solution is to understand the true nature of our sexuality. God designed us as sexual persons, male and female, so that we could participate with Him as co-creators of the human race. There is nothing that we have that is not a gift from God. But God expects us to use these gifts intelligently, according to the plan He has devised for us. The purpose of eating is to sustain the life of our bodies. It is not simply to enjoy the pleasures of eating.

The purpose of sex is to continue the human race. It not simply to enjoy the pleasures of sexual excitement. Abortion is the ultimate abuse of sex. If follows upon the decision to separate sex from babies, and then sex from marriage. It is the result of the refusal to accept the truth about human sexuality, and the responsibilities that accompany the choice to engage in sex.

Let the Truth Be Known

A fifth part of the solution is to shape public opinion with the truths about what it means to be a human being. We are to enter the public square and clearly assert these truths. We must point to the full humanity, and personhood, of the unborn baby. We must point to the real needs of children to have a mother and a father who are committed to them in providing a stable home, which is the result of a committed marriage. We must be willing to explain the real purpose of sex, and where its many deviations today go wrong. We must explain, and defend, the God-given rights, and duties, that accompany our God-given human dignity.

A sixth part of the solution is to help mothers in a troubled pregnancy, both before and after birth. They need our support in order not to respond to society’s doom and desperation mindset. Many are desperate, and they need help and someone to walk their journey with them, one who is not going to cooperate with society’s mentality that abortion is the only option.

Women who have experienced the tragedy of abortion need to know, and experience, the healing process that our good Lord is so willing to provide them. We are to help them find this healing.

The only coherent basis for a claim that man has rights that are absolutely immune to invasion by the State is that man is a spiritual creature with an immortal destiny that transcends the interest of the State.

“From the moment of conception,” said the 1987 Instruction on Bioethics issued with the approval of Pope John Paul II, “the life of every human being is to be respected in an absolute way because man is the only creature on earth that God has ‘wished for himself’ and the spiritual soul of each man is ‘immediately created’ by God; his whole being bears the image of the Creator …. God alone is the Lord of life from its beginning until its end: no one can, in any circumstance, claim for himself the right to destroy directly an innocent human being.”

All human life is precious because it comes from God and that, as Pope Joh Paul II said at the Capitol Mall in 1979, “No one ever has the authority to destroy unborn life.”

May the good Lord or all life, who first designed human nature, and then came among us as one of us to show us what is all involved in our humanity, and then laid down his life for us so that we could correct our mistakes and return to right reason, may He give us the courage and the wisdom we need to address the grave evil of abortion in our times.