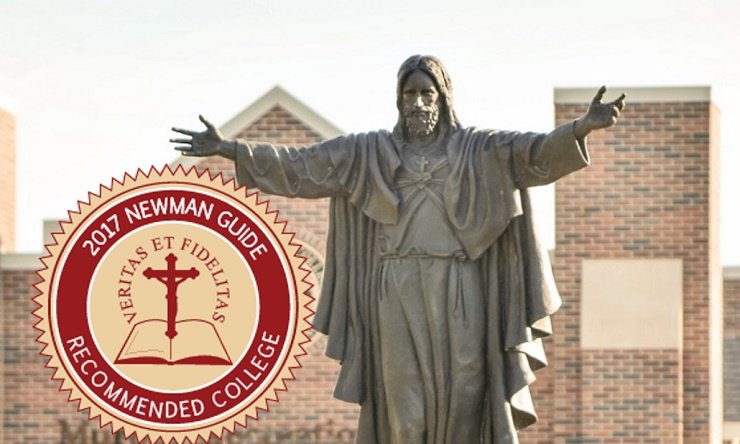 Benedictine College in Atchison, Kansas, is recommended in the 2017-2018 edition of The Newman Guide to Choosing a Catholic College, a publication of The Cardinal Newman Society that recommends the best Catholic colleges, universities and higher education programs for excellence in faithful Catholic education. The complete listings can be found at TheNewman Guide.com.

With the release of the 2017-18 edition, the Newman Society celebrates 10 years of connecting families with faithful Catholic education through the Guide. It also celebrates the strength and accomplishments of the recommended institutions over the last several years, despite the substantial challenges faced by most private colleges.

For instance, Benedictine College has had 19 straight years of enrollment growth—43% in the last seven years—and opened 10 new residence halls and three new academic buildings in a decade. The college has also added Mary’s Grotto, enthroned the Sacred Heart of Jesus, and built two new chapels.

Daily Mass attendance at the College has increased to about 625 students, the college was consecrated to Mary, and the Sacred Heart of Jesus statue was enthroned in the center of campus. Known as the “Flagship College of the New Evangelization,” Benedictine College has been recommended by the Newman Society in every edition of the Guide since it began publication.

“In the last 10 years, the institutions recommended in The Newman Guide have experienced remarkable success while remaining committed to a strong Catholic identity,” said Cardinal Newman Society President Patrick Reilly. “The reputation of and appreciation for these faithful institutions is certainly growing in the Church, and they have become pillars of the New Evangelization in America.”

In addition to one of the largest undergraduate Theology programs in the country, Benedictine College can also boast of an Engineering Department offering degrees in Chemical, Civil, Electrical and Mechanical Engineering. Architecture is also offered, making it one of the few Catholic colleges in America with both engineering and architecture. The college is also an All-Steinway school and is known for the excellence of its Music Department. All degree programs embrace the Liberal Arts roots of the college and faith is at the center of the curriculum.