Reasons to go into debt for a Catholic college 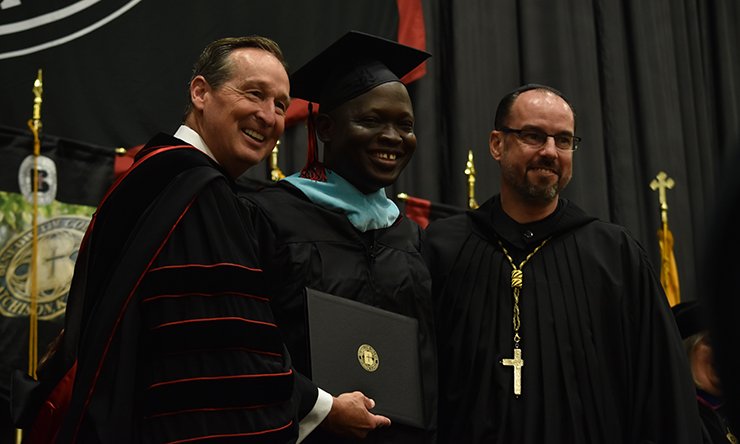 Don’t get me wrong: Getting way over your head in college debt is a really bad idea— and some people have clearly done just that. But we who work in college education have been seeing another problem: Excessive fear of student loan debt.

It’s no wonder. There has been a years-long effort to create the impression that there is a student debt crisis because the federal government has been seeking greater control over higher education. An economist at Forbes explains how this works.

President Obama made higher education funding a centerpiece of his presidency and — intentionally or not — initiated the kind of policies that Pope Francis calls “ideological colonization.”

For the sake of Catholic higher education, it is important to keep perspective and remember that there are good reasons for moderate student loan debt spent on Catholic education.

First: The average student debt is not a crushing burden.

The average student loan debt for a four-year college education is $26,000. Online calculators show what it would mean to pay that off in 10 years — about $288.65 a month. Far from a crushing burden, that is less than the average monthly car payment.

That car payment —$361 on average for a used car and $483 for new — gets you an asset that rapidly decreases in value such that it will have to be followed by another car loan, and then another. Meanwhile your $288.65 a month average student loan payment goes away in 10 years. And what does it leave you with? Let’s see ….

Second: College is where you choose or lose your faith.

A 2008 Pew U.S. Religious Landscape Survey found that attending CCD, Catholic high school, or youth groups made little to no difference in whether an emerging adult ended up staying Catholic. What does make a difference?

Researchers looking at the effect of college on faith life found that “people in their forties, fifties, or sixties tend to have the same values they had back in their twenties.”

We have seen it again and again. Students who attend Catholic colleges with strong missions gain an unshakeable faith. And students who take their faith with them to secular universities — including those with strong Catholic centers — often come back agnostic. Why?

A Gallup-Purdue study of more than 30,000 people showed that personal relationships with professors and other college mentors were the most enduring effects of college.

This is because college (as researchers have long known) is like an intellectual boot-camp: Freshmen enter college with an unwarranted certainty about the world. This breaks down when they encounter new ideas, leaving them disillusioned and relativistic. Their worldview is then rebuilt from the ground up. This often happens in the classroom of a single professor who makes everything “click.”

At the best Catholic colleges, this process will lead students to discover the enduring truths of Christian Civilization. At most secular colleges it will lead them anywhere but there.

Fourth: College is where many people find lifelong friends.

In one recent study, subjects were asked to tell their life story. Their most significant memories clustered around the ages of 17-24. The people they met, the adventures they had, and the memories they made in those years of their lives stayed vivid even as more recent memories faded.

That is because colleges tend to be what David Brooks recently dubbed “thick” organizations. “A thick institution becomes part of a person’s identity and engages the whole person: head, hands, heart and soul,” he wrote.

The problem: Many colleges consider these four years a time of freedom from restraint, a time to go wild. Without realizing it, they are forming their students’ most vivid, identity-forming memories and relationships in an atmosphere of hedonism.

Catholic colleges with strong missions are much more likely to be places where the four years are looked at as a time of formation and embed positive, intentional, virtue-building memories in the deepest places of their students’ hearts.

I know that college decisions come down to many factors and many reasons. I also know that I am naturally biased in favor of the kind of school that employs me.

But I consider my own Catholic college education to be the best money I ever spent — and I wouldn’t hesitate to do it all over again.