Robert Louis Stevenson and the Poetry of Childhood 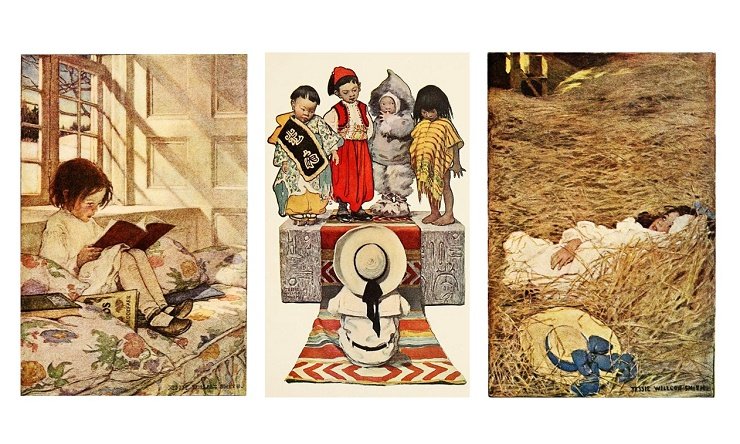 It began one night when friends were visiting from out of state. After dinner, my wife, April, suddenly produced a stool, placed in the middle of the living room floor, and announced, “It’s poetry night.”

The kids took turns standing on the stool and reciting poems. I wasn’t previously aware that my children knew any poems. But there each Hoopes stood, called out a title “by Wobert Wouwis Stevenson” and delivered lines from A Child’s Garden of Verses.

Many memories of my children seem to blur into each other or fade away altogether. Robert Louis Stevenson has given me some that stay.

“The rain is falling all around,
It falls on field and tree,
It rains on the umbrellas here,
And on the ships at sea.”

I remember Thomas, now a sophomore here, reciting, when he was 3:

“The world is so full of a number of things,
I’m sure we should all be as happy as kings.”

The way he said it didn’t just show poor diction; it was impossible for me to make out any of the words at all. I knew them entirely though his older sisters’ corrective whispers.

His oldest whisperer, Cecilia, now 24, recited “Time to Rise” at age 7, tilting her head to emphasize the last two lines — and shouting the last two words:

“A birdie with a yellow bill
Hopped upon my window sill,
Cocked his shining eye and said:
‘Ain’t you ’shamed, you sleepy head!’”

It is good that I have these images in my head — but the best part is that my children have Robert Louis Stevenson poems in their heads.

Stevenson showed in his novels that he has both a knack for what kids like and a way of delivering the goods without descending into formula or convention.

Treasure Island is about a boy who gets mixed up with pirates and buried treasure — but it’s also an offbeat examination of loyalty, from the black dot warning of Billy Bones to the sad final parting of Jimmy Hawkins and Long John Silver. Kidnapped! is about a young man who becomes orphaned, then kidnapped, then a fugitive, then an heir. But it spends most of its time on an outlaw Scotsman’s eccentric foibles.

Garden of Verses does the same thing — it captures childhood experience without short-changing or sentimentalizing it.

Childhood naivete carries a certain profundity with it, and Stevenson exploits this.

“My Bed is a Boat,” “Escape at Bedtime,” and “Land of Nod” all describe the poet’s childhood habit of launching himself into unknown lands as darkness blotted out the real world, allowing imagination to take over. But then “Farewell to the Farm” and “The Hayloft” are about the mystery and grandeur of a rural holiday location. “The Land of Counterpane” does them one better — it’s an epic view of toys on the blankets of a sick-bed.

Stevenson’s poetry makes the reader understand that there is an unseen world awaiting us that we can catch glimpses of in ordinary things. Anything from rain to cows can take on a mystical significance.

His “Wintertime,” “Bed in Summer” and “Autumn Fires” fully evoke a child’s experience of each season. With a few phrases (“The right word was always at the tip of his pen,” said his great fan, G.K. Chesterton), his poems provide access to memories I never had as a child in Arizona.

Now, they reconnect me to memories I might otherwise forget. His “To My Mother” is a great description of what his poems do:

You too, my mother, read my rhymes
For love of unforgotten times,
And you may chance to hear once more
The little feet along the floor.