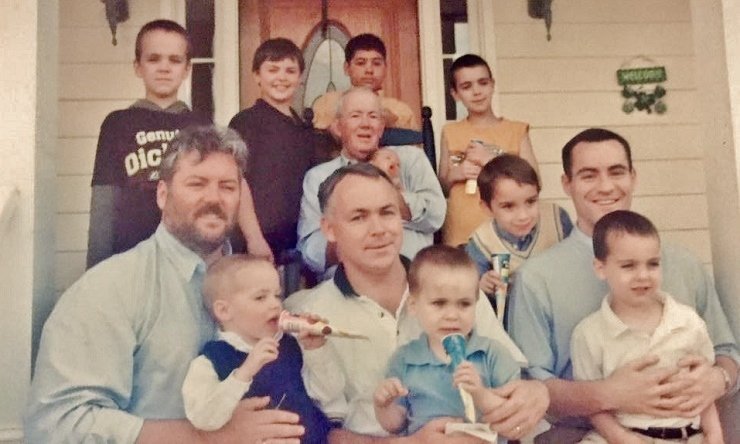 In advance of Father’s Day, a poem by Benedictine College Great Books professor, Dr. Edward Mulholland. This poem was written shortly before his father, Henry Mulholland, a longtime resident of Garden City, N.Y., died in Stuart, Florida, on June 7, 2017, at the age of 78. Henry was a devoted father to his five children and grandfather to 27.

In a wheelchair in the hallway
Amid nurses in purple scrubs
His lilting Irish song snippets
Greeted passersby. His blanket,

N.Y. Giant fleece in Florida heat,
Was curled on legs now thin as arms
Which once stood strong at six-foot-two
But not since March. And it was May.

He thought the spoonfuls of turkey
I fed him in baby pieces
Were hilarious, but then he
Was full after three. Halting words,

Heaved in shrapnel shards, detritus from
Shattered memory mosaics,
Their only sense grammatical,
Replied that he was doing fine.

He craned his neck to call Aunt Peg,
Long dead, there on the small sofa.
And as always, more than ever,
My welled up eager beggar’s eyes

This poem originally appeared at Aleteia.