The Deeper Meaning of the Solar Eclipse 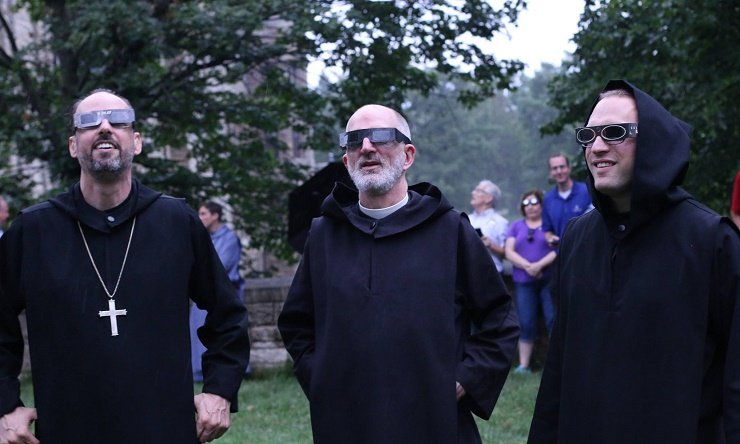 The solar eclipse of Aug. 21, 2017, has come and gone. People traveled from all over the country to the locations where this event could best be viewed. We were treated to a rare view of the corona of the sun, while the earth was momentarily darkened by the shadow of the moon as it passed between us and the sun. So what is the significance of all this?

The solar eclipse means one thing to astronomers, and another to mankind at large. To the astronomers it means another rare opportunity to view the surface of the sun, called the corona, and see events that cannot be seen when the full brilliance of the sun is in effect.

During the eclipse we can see more of the activities occurring on the surface of the sun. The great lights, colors, and fissures coming from the sun’s surface tell us much about the chemical makeup of this star, called the sun. And what we learn about this star can be applied to the billions of other stars in our galaxy, called the Milky Way. This star, the sun, is the center of our solar system, the center of gravity for all the planets revolving around it, the matrix from which all the 9 planets emerged, and the source of light and energy upon which all forms of life depend.

Our capacity for knowing, our insatiable hunger for the truth, for seeing things as they really are, is at work here. But we can’t stop with the material aspects of this search for truth.

In a typical day we are all caught up in contemporary events. We live in our own little world. Then comes an unusual event, like a total solar eclipse. Now we are forced out of our little worlds, and now we must see the bigger picture. We marvel that we are part of this immense universe. And we marvel at our ability to reflect upon it, and to see how we fit into the picture.

So, we are not a world unto ourselves. We are part of something much greater than what we read in the newspapers and view on television and the internet. We are part of the solar system, a system of nine planets revolving around the sun. The earth makes a complete rotation on its axis every 24 hours, giving us the effect of night and day.

The earth orbits around the sun in a year’s time, which also produces the four seasons.

We live on a “privileged planet,” which has so many advantages over all the other planets that we know of. There is life, in such a great variety of species here, culminating in human beings who are capable of self-consciousness, reason, volition, and friendships. In the crust of the earth there are all of the 118 elements found in the periodic table.

This is highly remarkable, since the vast universe is composed primarily of hydrogen (75%) and of helium (23%). All the other elements, or chemicals, were forged in the centers of stars, where hydrogen and helium were subjected to immense pressures of heat, gravity and atomic fusion.

When old stars died and exploded as supernovas, they released these combinations of elements into the surrounding space, which became a nebula cosmic soup from which are formed new stars, which in turn produced new planets in their solar systems.

In the crust of the earth we find all of the elements of the periodic table, many of which are absolutely necessary for any form of a life cell. Very near the earth’s surface we find huge reserves of coal, crude oil, and iron ore. We find oceans and rivers, and fertile fields. We find an atmosphere that hugs the planet, where clouds carry moisture to the continents, circulate oxygen and carbon, while protecting us from harmful rays of the sun. All forms of life, as we know it, require a delicate balance among all these factors. We did not produce, or design, them; we merely discovered them and learned how to use them correctly.

Because of the earth’s atmosphere, we are able to observe much of the rest of the universe. We see its unfathomable immensity. We see that the nearest star to us, Alpha Centauri, is 4.2 light years away from us. We see that in our galaxy of the Milky Way, it takes light 100,000 years to travel from one end to the other. And we realize that all the stars with their solar systems rotate around the center of the galaxy, which takes some 250 million years for one rotation. And our galaxy, the Milky Way, is only one among 100 billion other galaxies.

This is the universe you and I live in for a brief span of time. We are here for only 70-80 years, then we must leave. We can’t stay. Eventually we must come to grips with some major questions: Why is there a universe? Why are we here? What is this life all about? What are we to accomplish during our lifetimes? If the universe had a beginning, 14 billion years ago, then who created it out of nothing, and who gave it its laws of nature and such exquisite designs? What is His purpose in creating us?

It is common sense to say that everyone in the human race shares much in common while we are living here. We all have the same basic material needs, and there is plenty of these goods of the earth for everyone to live a decent standard of life. Thus, there need not be poverty. So why can’t the nations and ethnic groups learn to live together in peaceful coexistence? We all have the same basic needs, and the same desire for happiness, for completion. Why can’t the nations become a family of nations?

But the solar eclipse provokes other, and deeper, questions. Our human nature is such that we abhor the idea that we will not live forever. We have the capacity to know, to see things are they really are. We shun false information, distorted facts, and we fight prejudices. We search for meaning and purpose in life. We want to know the truth, matters as they really are. We know that the human person is the summit of all the material creation that we have experienced.

And we know that these truths are self-evident: “that all men are created equal, that they are endowed by their Creator with certain unalienable rights, that among these are Life, Liberty, and the pursuit of Happiness.”

If these are undeniable, indisputable, realities, then they must affect our ways of thinking and acting. We need to be in a relationship with the Creator of the universe, and the Designer of our human nature.

If He has taken the trouble to reveal Himself and His plan for us, then we need to take them seriously. We need to use our minds to come to as clear an understanding of God, ourselves, and the world we live in, as we can. And with that understanding, we need to apply our talents and efforts to building a just society that respects the human dignity of every person.

Our life on this planet is short, and the solar system itself will eventually die. But the immaterial soul that God created, when each of us was conceived, will endure forever. Our challenge is to realize our great calling, our destiny.

These are some of the deeper meanings of a momentary solar eclipse by the moon. Psalm 8 is Divine Revelation’s reflection on these realities.