The New Faces of Memorial Day 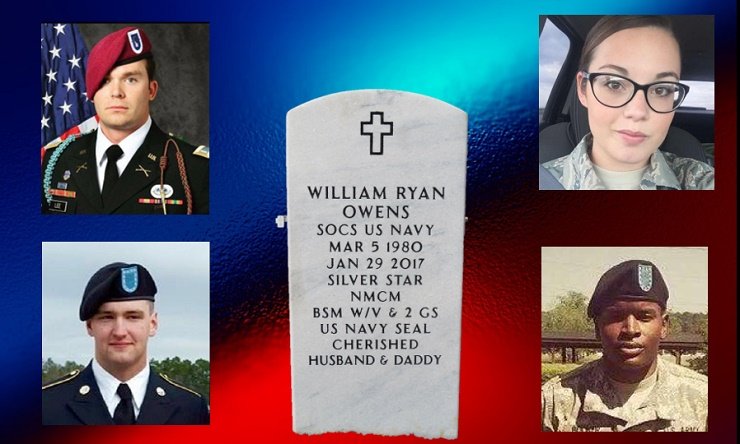 On Memorial Day we acknowledge a great debt we owe to hundreds of thousands of men and women who died for their country long ago and far away.

But we also owe a debt to a man who died for his country last month. And a woman who died the week before that. They and other casualties of 2017 are the newest faces of Memorial Day.

Today is the one-month anniversary of the death of Army First Lieutenant Weston Lee, of Bluffton, Georgia, the victim of an improvised explosive device — an IED — in Mosul, Iraq.

A columnist from Lee’s local daily summed him up this way: “He was a Georgia boy — and a damn fine one.”

“He had a southern drawl even during movement to contact in the swamps,” said a woman who served with him. “He adored his girlfriend and loved his country.”

Those are the kind of ordinary virtues that mark the extraordinary lives we remember today.

Owens played on his high school basketball and football teams. He wasn’t a star, but he was hard-working and consistent, the kind of player coaches — and teammates — love.

That’s the kind of SEAL he was, too. Rear Admiral Tim Szymanski called him “a highly respected teammate who served silently, nobly and bravely through several combat deployments.”

But most of all, said the SEALs, Owens was “a devoted father, a true professional and a wonderful husband.”

“Mother Alex” as she was known, was an Air Force weapons loader who died in Jordan on March 22. She was 25. Her commander remembered how she reported for duty on June 4, 2010, when she still used her maiden name: “Hi, I’m Airman Gleason, what do I need to do?”

That was the way she lived her life. “Alex was such a bright light,” said a tribute from her high school, “super-positive, loved by all and a person who would help anyone.”

Army Private first class Brian P. Odiorne, 21, didn’t leave any children behind when he died in Iraq Feb. 20 — but he did leave a girlfriend.

“Brian made me who I am today, he broke me out of my shell, and helped me be more confident and outgoing,” Molly Przybyla said. “He is the love of my life, the one I was supposed to end up with.”

Another tribute speaks volumes about the kind of guy Odiorne was.

“I can’t believe what I’m hearing,” a friend posted. “I had just received a message from you the other day asking to check up on your grandmother for you every now and then since you can’t always talk to her. I promise I will visit her.”

Bishop Mitchell Rozanski performed Brian’s funeral at All Saints Catholic Church in Ware, Massachusetts. “He was willing to put his own life on the line so that others could live in freedom and dignity,” the bishop said.

This is ultimately what we honor on Memorial Day: Men and women who did what so many of us cannot even imagine ourselves ever doing.

They disciplined themselves in ways we won’t and volunteered to do things we can’t. They rose above the petty partisanship that paralyzes so many, and gave everything for their country.

The casualties of 2017 had all kinds of mixed motives that led them on their path — we all do — but their strongest motive was love.

Specialist Isiah L. Booker died January 8 in Jordan, where he was deployed to fight ISIS. The statement from his family says it all:

“He loved God, his family and friends. He loved cooking and he loved to dance. He cared genuinely for those around him. Our message to the world from our son, brother, nephew, cousin, friend and soldier: Know Christ, Love your family and friends, Serve your country, HONOR THEM ALL!!”