The Three Cs of Fatima That Everyone Forgets 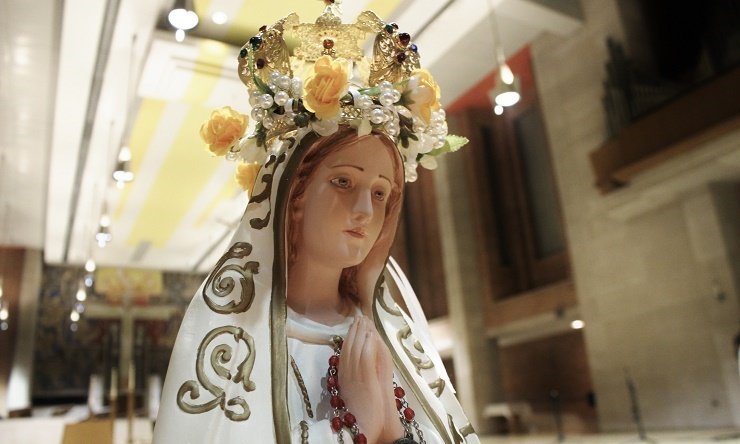 I discovered a remarkable quote from St. John Paul II when I was writing the newly published Fatima Family Handbook.

This year, Benedictine College is celebrating the 100th anniversary of the apparition (May crowning shown above), and if I felt before that the message of Fatima was nice enough but a little too old-fashioned and a little too intense, I no longer do.

When Pope John Paul II arrived in Portugal to beatify two of the three shepherd children who saw Our Lady of Fatima 100 years ago this May, he was met by throngs of children in costume.

“Dear boys and girls, I see so many of you dressed like Francisco and Jacinta. You look very nice!” he told them. “But in a little while or tomorrow you will change clothes and the little shepherds will disappear. They should not disappear, should they?”

He then summed up the three key Fatima practices they should start, for the Church and for souls — practices that uncannily match up with devotions that many of us have encountered recently, entirely apart from Fatima, and considered fresh and new. They are the three Cs of Fatima: console Jesus, convert sinners, and consecrate to Mary.

First St. John Paul II told the children: “Our Lady needs you all to console Jesus, who is sad because of the bad things done to him.”

The drama of Fatima started in 1916 when Francisco was 9 and an angel visited him with his sister and cousin three times, at one point bringing them the Eucharist. His message: “Comfort your God.”

Thereafter, Francisco’s life “was motivated by one desire,” said the pope, “to console Jesus and make him happy.”

The great saints of our time were motivated by this same desire, particularly St. Teresa of Calcutta, whose house chapels feature the words “I thirst” written on the wall beside the tabernacle. Mother Teresa’s mission was to quench Jesus’s thirst for love.

But for many of us this “comfort your God” spirituality expresses itself in Eucharistic Adoration where millions now respond to Jesus’s request for consolation at Gethsemane: “Could you not spend one hour with me?”

Perpetual Adoration chapels were rare and confined to certain religious communities until lay people first began to participate in the 20th century. Now they are increasingly common, with the Vatican identifying thousands of chapels worldwide.

Francisco would often say, “I want to console Jesus in the Blessed Sacrament.” A century later, we’re all saying that.

Second, John Paul told children at Fatima: “Jesus needs your prayers and your sacrifices for sinners.”

“Little Jacinta felt and personally experienced Our Lady’s anguish, offering herself heroically as a victim for sinners,” he explained.

Jacinta’s life was riveted by the vision of hell Our Lady showed her, where she saw how horrifying — and horrifyingly common — it is for sinners to reject God, eternally.

In the intervening century, Divine Mercy devotion became one of the most popular Catholic devotions in the world.

Hell is the unspoken truth that powers Divine Mercy. Without the “lake of fire” that Fatima reminded us of, we wouldn’t need the “ocean of mercy” St. Faustina revealed.

Third, St. John Paul II said: “Ask your parents and teachers to enroll you in the ‘school’ of Our Lady, so that she can teach you to be like the little shepherds.”

Then he told them about St. Louis de Montfort’s consecration to Our Lady, saying, “This was how the little shepherds became saints so quickly.”

Today, Montfort’s “total consecration to Mary” has grown in popularity, thanks to Father Michael Gaitley’s book, 33 Days to Morning Glory, which shows how central it was to the most popular Catholic figures of our time.

Father Gaitley seems to have a book or more for each one of the practices John Paul asked for: Consoling the Heart of Jesus and 33 Days to Merciful Love, for starters.

In the booklet, I call them the three Cs of Fatima — consolation, conversion and consecration — and give family-friendly practical ways to live each one.

If ever God was using a bullhorn to get our attention, it is with these three Cs, which he has been repeating endlessly, using every means he can find.