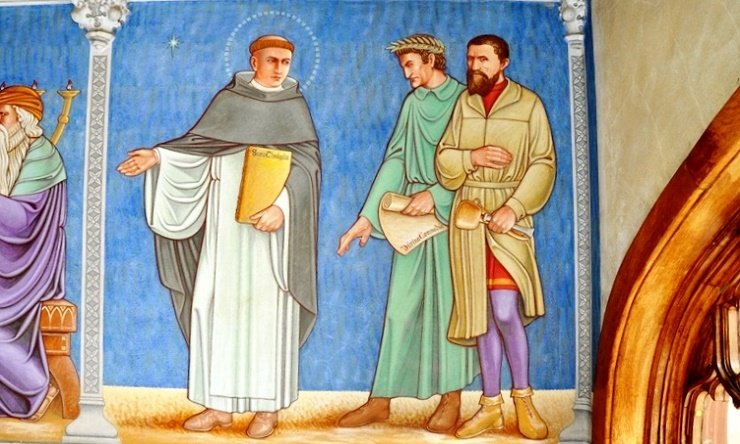 Still in exile from his beloved Florence when he died, Dante is buried in Ravenna, a prominent reminder of the political and papal intrigue that surrounded his life—some of it his own doing, thanks to his rapier wit and acerbic pen. Given his unrestrained criticism for the popes and princes of his time, one might think that his work is not well appreciated by the Vatican.

Au contraire. No literary figure has been the subject of more lofty praise from the popes, many of whom quoted Dante hundreds of times over the course of their pontificates. Their lauds have even been enshrined in documents as authoritative as a motu proprio.

While each pontiff has a distinct appreciation for Dante, here are a few reasons modern popes have held in common in their love of the supreme poet.

A consummately skilled artist, Dante was fiercely dedicated to the truth, seeing his work as “vital nourishment” for souls, wrote Pope Benedict XV.

Pope Francis said that Dante’s greatness can be recommended “not only artistically but also theologically and culturally.”

Pope Paul VI imagines Dante scholars teaching such that “all the treasures of the poet can be drawn from for study and for the revitalization of culture for generations to come.”

In fact, Pope Francis concluded, Dante is “a prophet of hope, a herald of humanity’s possible redemption and liberation, of profound change in every man and woman, of all of humanity.”

Second, Dante understood the interrelatedness of faith and reason.

While having a profound understanding of philosophy and theology, Dante also “drank deeply at the founts of Sacred Scripture and the Fathers,” observed Pope Benedict XV.

“Through his immortal works,” wrote Pope Francis, Dante “still has much to say and offer to those who desire to travel the way to true knowledge, to the authentic discovery of self, of the world, of life’s profound and transcendent meaning.”

The Comedy understands, wrote Pope Paul VI, that “to restore order and salvation there is need for the harmonious action of faith and reason, Beatrice and Virgil, the Cross and the Eagle, Church and State.”

Pope Benedict XVI proclaimed that “this vision of Dante reveals, on the one hand, the continuity between Christian faith in God and the search developed by reason and by the world of religions; on the other, however, a novelty appears that surpasses all human research … a love that moved God to take on a human face.”

Third, Dante may have been choleric, but he was triggered.

If he was acrimonious in his judgments of the popes of his times, Dante can be excused, said Pope Benedict XV: “if with lacerated mind he breaks out sometimes into words of excessive blame, the more so that, to increase his feeling, false statements were being made by his political enemies ready, as always happens, to give an evil interpretation to everything.”

Pope Paul VI, too, adopted a forgiving attitude: “one can concede indulgence in regard to his art and political passion, that the office of judge and corrector was taken over by him, especially before pitiable circumstances.”

Dismissing the common misconception that obedience impinges on freedom, Pope Benedict XV noted that Dante was the preeminent example of how “obedience of mind and heart to God … incites and elevates [genius].”

In fact, Dante’s intense personality was not an obstacle to his obedience, noted Pope Paul VI: “such fiery attitudes never weakened his firm Catholic faith and his filial affection for Holy Church.”

Completely permeated by the Gospel, Dante could, wrote St. John Paul II, “compose ‘the sacred poem, to which both heaven and earth have turned their hand.’”

“The Comedy,” wrote Pope Francis, “can be read as a great itinerary, rather as a true pilgrimage, both personal and interior, as well as communal, ecclesial, social and historic.”

In a couple of paragraphs on Dante’s “political vision,” Pope Paul VI observed that while for Dante “the State is subordinate to the Supreme Pontiff in matters of faith and morality … both the Church and the State are at the service of the Christian community.”

Sixth, Dante is not just great; he’s the greatest of the great.

Even among “celebrated geniuses” of Catholic art, said Pope Benedict XV, “highest stands the name of Dante … the most eloquent singer of the Christian idea.”

Pope Francis agreed that Dante ought to be regarded as “an artist of the greatest universal esteem.”

He was even dubbed “the lord of sublime song” by Pope Paul VI, who said that Catholics have a duty “to explore in his work the inestimable treasures of Christian thought and sentiment.”

Want to peruse some original sources in their full glory?