This Sunday: Finding Peace Amid Death and Destruction 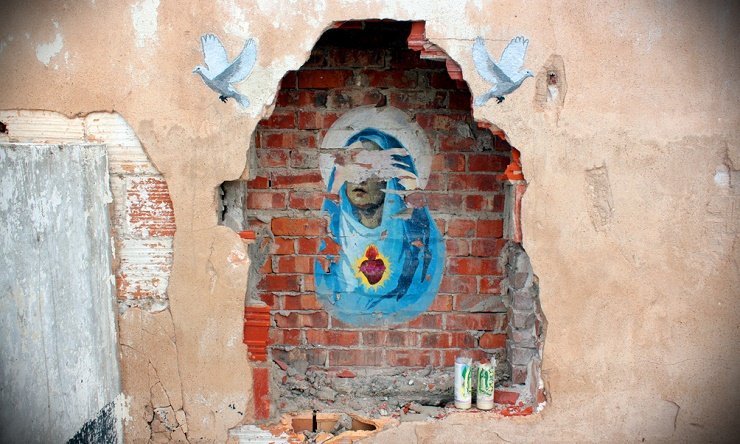 This Sunday’s Gospel (the 27th Sunday in Ordinary Time, Year A) and first reading warn what happens to a society that rejects God, and it is a familiar scene: Violence and destruction, much what we see all around us today.

But then comes St. Paul, with hope in the middle of it all, telling us to have no worries at all.

Jesus tells the story of the householder who sends helpers to the tenants in his vineyard, with disastrous results.

The story is an allegory. The householder is God. The vineyard is Jerusalem. The tenants are Israel’s leaders. The servants he sends are the Old Testament prophets. His son is Jesus. The tenants reject or kill all of them.

What happens to them after that? Death and destruction — much like the destruction of Jerusalem at the hands of the Romans.

But like every Gospel passage, the story does not just refer to the past: It speaks to us today.

If that sounds like a frightening, apocalyptic take, then it’s appropriate for the end of the liturgical year, when the liturgy reminds us of the terrible reality of a world without Christ.

But we do not need to read a divine conspiracy theory into history to know that a world without God invites destruction. God gives us his morality to protect us, not to punish us. When we ignore his rules, we are essentially ignoring the safeguards our lives could have.

This is made clear in the first reading from Isaiah and the Psalm about the master destroying his vineyard.

We hear in the first half that how the vine-dresser built his vineyard and “spaded it, cleared it of stones, and planted the choicest vines; within it he built a watchtower, and hewed out a wine press.” In other words he prepared the soil, chose the plants, provided protection and readied for the harvest. Just like God did for us.

We hear in the second half how the vine-dresser will now undo each of those things: He will withdraw care and protection and preclude the possibility of harvest. Furthermore, he will punish in ways that only God is capable of: “I will command the clouds not to send rain upon it.”

But there is one little oasis of peace in today’s readings: St. Paul’s letter to the Philippians.

He sums up his message: “Keep on doing what you have learned and received and heard and seen in me. Then the God of peace will be with you.”

These are the remarkable words St. Paul wrote to his followers even though the leaders of Jerusalem and Rome were against them, and even though he had to send his words out from his prison cell.

St. Paul knows that ignoring God’s laws brings destruction. But he also knows that the opposite is true: If we keep the faith in our hearts, minds and lives, we will be saved.

“Have no anxiety at all” is a hard message in hard times. But if our God is the God of all — and he is — then there truly is nothing to worry about.