This Sunday: Greater Than Alexander the Great 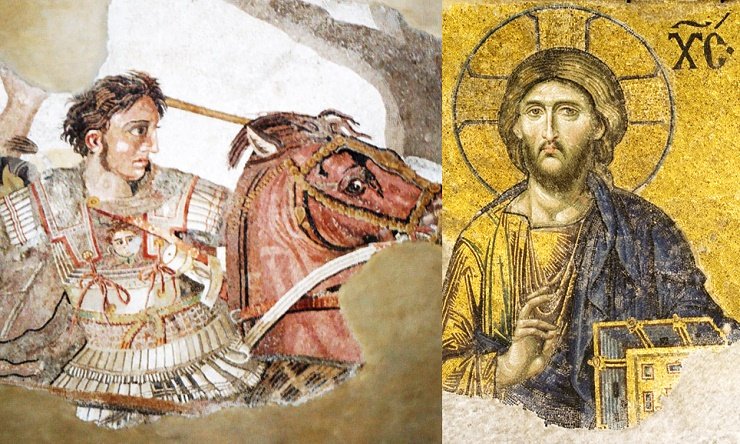 It is hard to imagine a more impressive human specimen than Alexander the Great. But the readings on this Sunday (the 14th Sunday of Ordinary Time, Year A) invite us to try.

Alexander was handsome, powerful and wise. He had huge ambitions — he wanted to rule the world — and his talent matched his ambitions. He conquered lands from his native Greece, through Egypt and the Holy Land to India. His powerful personality made him a great commander of his army, but it also helped keep his empire relatively safe in his grasp throughout his life.

His intellect was extraordinary: He had been tutored by Aristotle himself, and continued to study the arts and sciences throughout his life. His military strategy is still studied in war colleges.

This Sunday’s first reading is often regarded as a prophecy of Alexander’s conquering of Jerusalem.

He would laid waste to the ancient city of Tyre, then see Jerusalem surrender to him. He would enter the gates of Jerusalem on a war horse or chariot.  But we know Alexander would die young and so did his hold on Jerusalem.

Then Jerusalem would look forward to a new king: “Rejoice heartily, O daughter Zion, shout for joy, O daughter Jerusalem! See, your king shall come to you; a just savior is he, meek, and riding on an ass.”

The reading describes the kinds of trappings of war associated with Alexander, and tells us what the real Messiah thinks of them: “He shall banish the chariot from Ephraim, and the horse from Jerusalem; the warrior’s bow shall be banished, and he shall proclaim peace to the nations.”

Alexander on his chariot would call himself the King of Kings — but the real King of Kings was meek and humble of heart, and would enter on a donkey.

Alexander and Jesus are perfect counterparts to illustrate what Jesus says in Sunday’s Gospel: “You have hidden these things from the wise and the learned,” but “you have revealed them to little ones.”

Yet how often in our life do we choose the way of Alexander over the way of Christ?

St. Paul contrasts the two ways in the second reading when he says, “Brothers and sisters: You are not in the flesh; on the contrary, you are in the spirit. … If you live according to the flesh, you will die, but if by the Spirit you put to death the deeds of the body, you will live.”

Alexander’s victories really were “in the flesh”: They meant back-breaking effort and the rule of fear. Jesus says “Take my yoke upon you and learn from me … and you will find rest for yourselves. For my yoke is easy, and my burden light.”

So, the choice is ours. We can spend a life acquiring fame, power and wealth. It is unlikely we will be even a fraction as successful as Alexander the Great, and then we will die and be left where he was.

Or we can spend a life “in the Spirit” yoked to Christ, and live in him forever.

Note: An earlier version of this piece confused the timeline of Alexander the Great’s attack on the Holy Land, which occurred after the Book of Zechariah was written. This has been corrected.