What the Total Eclipse Revealed 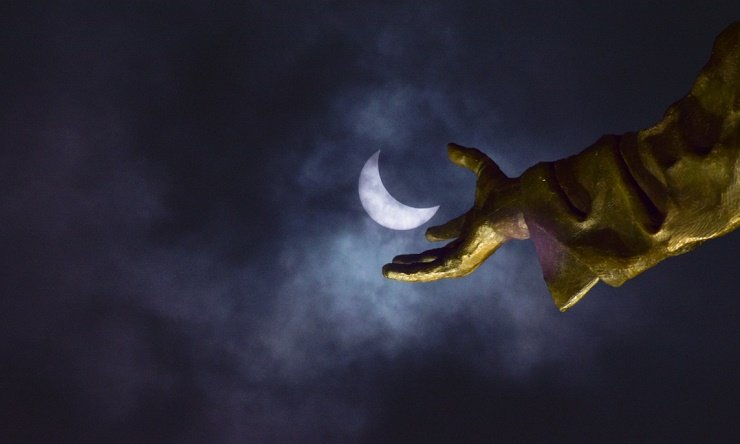 We planned for August 21, in Atchison, Kansas, for months. We knew the sun would disappear from the noonday sky and Benedictine College, where I work, will be bathed in darkness.

In terms of sheer numbers of people expected, this wass going to be the biggest campus event ever —  with Vatican astronomers and thousands of people marking our Century of Science — and I think I understand why.

First: An Eclipse shows us that not all darkness is equal.

We had a debate in my office on what to call the eclipse. “Total Eclipse of the Heartland” was a favorite; “Embrace the Totality” was not. Our recent advertising slogan was “Greatness Awaits,” so I suggested “Darkness Awaits.” That got voted down.

“Look,” I said. “There’s a total eclipse of the sun every night. A terrestrial eclipse. And it’s truly awesome: first, you have discoloration of the horizon called ‘sunset,’ then you have the earth gradually blocking the sun until it becomes total, and then the darkness lasts all night long — way more than 2 and a half minutes.”

People only rolled their eyes. That is everyday darkness. The eclipse is once-in-multiple-lifetimes darkness. This darkness is a bigger deal. Why?

An 1878 account of a total eclipse in America reported that roosters began to crow, owls took to the air, cows headed home, and grasshoppers folded their wings and dropped from the sky.

The order in the universe is only a given because God wrote the rules. When the rules change, everything becomes unsettled.

The splashes of sunlight pouring through the trees, during eclipses become crescents — tiny representations of the way the sun looks.

As the eclipse nears its totality phase, a wavy shadow pattern appears on the ground. Then, seconds before the eclipse, the moon looks like a giant finger-rosary with beads appearing all around it caused by the mountains and craters on the moon’s surface, as the temperature drops 10 degrees.

Fourth: Eclipses remind us how small we are.

There are things in life that we literally have no control over: The weather, the sun, and the moon are totally outside our power. We can’t change them to suit our needs. We have to change our needs to suit them.

But there is one person who can change them.

Fifth: The eclipse helps us appreciate the miraculous.

We can’t control the weather, but Jesus can. The sun will always move in exactly the same way, unless God wants it otherwise. And when the moon is full, as it is at every Passover, solar eclipses are impossible. Unless God wants one.

Ryan Maderak, the chair of Benedictine College’s astronomy department has been asked repeatedly by national reporters why the Gospel say there was a solar eclipse when Jesus was crucified when that’s impossible.

“Miraculous occurrences are miraculous,” he tells them.

Which brings us to a sixth lesson: An eclipse reveals how great we truly are.

Jesus didn’t die for the moon or the sun or the weather. He died for each of us.

And God doesn’t change the path of the sun and moon to bring them closer to each other. He does it to bring us closer to him.

God has created enormous spheres in space whose paths are utterly predictable. We know when all the eclipses will happen and where every star in the sky will be during each one.

But no scientist can tell you where I will be at this moment the day after tomorrow, let alone 20 years in the future.

The sun may light up the world but the sun can’t describe the world. I can. And when the moon blocks the sun it’s a once-in-a-lifetime event. I can block the sun whenever I want, simply by holding up my hand.

Which makes me greater than the sun and the moon.

As St. John Paul II put it: “Compared to the immensity of the universe, man is very small, and yet this very contrast reveals his greatness: ‘You have made him little less than a god, and crown him with glory and honor.’”