“Great things begin at Benedictine College,” Curtis Martin told 444 graduates of the school in Atchison, Kansas. “This place has developed a reputation here for launching leaders into every area of the culture.”

Martin was speaking not just of the students in front of him, but of his own family and life’s work.

Not only has he sent five children to the college, but he founded the Fellowship of Catholic University Students, FOCUS, on campus here 20 years ago.

It all started when his friend, Ted — Dr. Edward Sri — began his teaching career at Benedictine College.

“We were going to host a leadership event inviting 24 college students to embrace Christlike leadership,” Martin said. “A couple months before it happened Ted called me and said ‘I don’t think we’re doing a conference. I think we’re launching the program.’ The rest is history.”

Today, Focus has grown to more than 650 Focus missionaries serving on 138 campuses nationwide.

Curtis Martin knows how important it is to find your faith in college. When he launched Focus in 1998, Martin told students how that happened to him.

Speaking in the then-new O’Malley-McAllister Auditorium on the Benedictine College campus, Martin told the story of his own college years in the early 1980s at Louisiana State University.

“If anybody had asked me if I was Catholic, I would have said Yes. But in reality, I wasn’t Christian,” Martin said.

A group of college friends picked up on that. “They began to pull all the elements of Catholicism — the Pope, confession, the Marian doctrines, Purgatory — and within one night, everything that was Catholic in my life, distinctly Catholic, was gone. I thought the Catholic Church was lying to me,” Martin said.

He left the Church and even joined up with Campus Crusade for Christ — a nondenominational evangelization organization.

But then his mother insisted he go on one last Catholic retreat.  The retreat ended with Benediction of the Blessed Sacrament — and forced Martin to make a decision.

“If that’s God, then we should worship him,” he said. “And if it’s not, we’re idiots because we worship bread. There’s no middle ground. Either we’re right on this or we’re wrong. And I didn’t know the answer to that. And I sat and I looked and I began to weep. I didn’t know where to go or what to do. I just began to pray.” 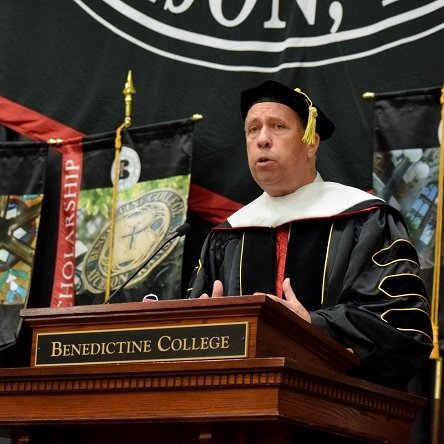 Twenty years later, Martin was back on campus telling a new generation of students how his  prayers were answered — for more than just him — when he founded FOCUS, which forms students through small-group Bible Studies led by trained missionaries.

“The first four missionaries here has grown into over 1,100  missionaries who no longer serve and another 800 who currently serve — so almost 2,000 missionaries were launched here.”

As of today, 128 Benedictine graduates have gone on to work for FOCUS. Another 7-10 will be added in 2018. Nearly 50 alumni of the college are currently employed by FOCUS. Many of these have been promoted to team directors, regional directors, or area coordinators within FOCUS, meaning Ravens have advanced into leadership positions, some near the highest levels, within the organization.

One of the original FOCUS ministers was Joe Wurtz, who served as FOCUS at Benedictine College from 1999-2000 and at the University of Denver from 2000-2001.

Today, Dr. Joseph Wurtz is Dean of Students at Benedictine and director of the Gregorian Fellows Leadership Program. He and his wife Megan, who was also one of the original FOCUS missionaries, live in Atchison with their five children.

Benedictine College has been a premier partner with FOCUS all along.

The College has also sponsored nearly every FOCUS leadership conference over the last 20 years and been the premier sponsor at every SEEK and Student Leadership Summit event.

Martin sees Benedictine college as a major player in the new evangelization.

“Something unique is going on here that is not going on at very many other places worldwide,” he said at commencement.

He told students: “You are about to be set free in this culture and this world that is desperately waiting for you to become who you were meant to be.”

First, “Your gifts and skills will have huge impact, but only if you stay close to Jesus Christ, because he is your power source, the key to who you are as a human person.”

Second, “As we go forward I’d like you to join me and pray the Memorare,” he said.

“We’re going to pray for every single person and every single situation you’re going to be in as a Benedictine College graduate,” he said. “Pray that God will go ahead of you, and that Mary would begin to soften and warm the hearts of the people who are out there and open their minds so that you can take the great formation that you have received here and have maxium impact.”

After all, that is exactly what happened to him all those decades before.

Click here for on Commencement 2018 at the Benedictine College web page.