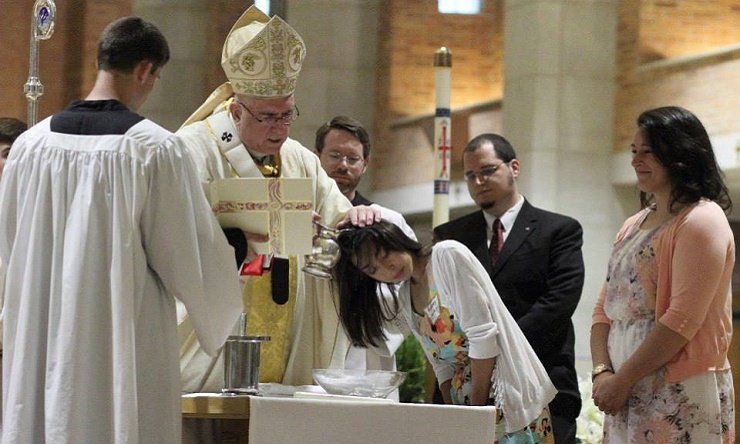 More than 30,000 new Catholics entered the Church in the United States this Easter, the Catholic Herald reported.

Where are they coming from? Everywhere. Nearly 3,000 Catholics entered the fullness of the faith either as candidates or catechumens in Los Angeles. In Atlanta, it was nearly 2,000. In Seattle, it was more than 1,000.

Here are a few of the kinds of people you see converting to the Church in 21st-century America.

As talk heats up about a possible cause for sainthood for British intellectual convert G.K. Chesterton, Catholics continue to follow in his footsteps.

The Catholic Transcript in Hartford, Connecticut, told one such story in an article about this year’s RCIA class.

“I was raised Episcopal Anglican,” said Joshua Becker. He attended a Catholic university but “I didn’t want to marry a Catholic. So I went off campus and met my wife … who was evangelical.”

“I started having what I call ‘Catholic thought’” he told the paper, discovering “the intellectual truth in the Catholic faith.”

After getting married, the “Catholic thoughts” still followed him, and he conversed with college friends about the faith. He was afraid to cause a rift with his wife, however, but finally found the courage to ask her, “What is it about Catholicism that you disagree with?”

“She swallowed hard and told me, ‘Nothing, I agree with everything.’” She had been quietly pursuing the faith as well.

Marriage is a common catalyst for conversion.

Whether or not it’s true that Blake Shelton plans to convert to marry Gwen Stefani, who talks a lot about her Catholic faith, many people do convert to join their spouse in the faith.

The Catholic Herald told the story of Tina Robinson, a nondenominational Christian who married a cradle Catholic. She prayed for a sign from God about what faith she should belong to. Not long afterwards, she found an invitation to join St. Bernard Church on her door.

“That was my calling,” Robinson said. She entered the Church this year.

Last week, Vox published “The Religious Hunger That Drives Jordan Peterson’s Fandom” about followers of the philosophy professor made popular by YouTube and TED talks.

The article mentioned another 20th-century British Catholic convert — Evelyn Waugh, as an exemplar of the “Catholic aesthetic.” The article notes the continued allure of “smells and bells” liturgy. The Latin Mass attracts these Catholics around the world.

But the ordinary Mass wins converts, too. The Catholic News Service recently told the story of Gabe Bouck, a seminarian in Washington, D.C., who lived most of his life as a Baptist.

That started to change when he went to his first Mass — and heard chant for the entire time. “The priest sung the entire Mass,” Bouck told CNS. “It absolutely took me to another place altogether. … There’s something very solemn and very reverent going on in a way that I have never experienced in a Protestant church.’”

The liturgy is “old media” — but new media is attracting converts as well.

Lizza Estella Reezay is LizziesAnswers on YouTube, and she has allowed her online community to follow her all the way in to the Church this year. She is just one vlogger — Ali-Marie Ingram and Brian Holdsworth are two others — who share their own conversion stories and Catholic apologetics via social media.

Islam is losing adherents in America at a quick pace — and a small but growing number are becoming Christians. Muslim Mustafa Akyol recently blamed Muslim extremism for the trend in The New York Times.

An article by student journalist Ashlee Fenn at Arizona State University explains how that might happen. It tells the story of Nahid K. — who was afraid to use her full name — and her conversion.

Her remarkable story began when she was kidnapped in Iran at age 11 while on a walk.

Nahid became unexpectedly calm and “recalls clearly hearing God’s voice telling her to remember this day and remember the feeling she had,” reports the story.

She later felt it again, after emigrating to America and attending Mass for the first time. “With conviction, I know Jesus is real, he is looking to help us all, we just have to allow him to,” Nahid told the paper.

She converted to Catholicism and later joined a Catholic pilgrimage to St. Jude’s Cathedral in Iran.

In Iran, becoming Catholic can be punishable by more than 10 years in prison — and the law is strictly enforced by monitors at Catholic churches.

Trouble started for Nahid when a guard questioned her Muslim name — and saw her recent baptismal papers. The guard said Nahid would not be allowed to leave Iran. She managed to stay with her group one more night, however, and a seemingly miraculous storm allowed her to escape.

These are just a few of the converts you can meet in America.

While it’s true that the Catholic faith has plenty of challenges in the United States, the power and persuasiveness of Jesus Christ and his Church have not died away. Far from it.

This appeared at Aleteia.
Image: Archbishop Naumann welcomes converts into the Church each Divine Mercy Sunday at Benedictine College.