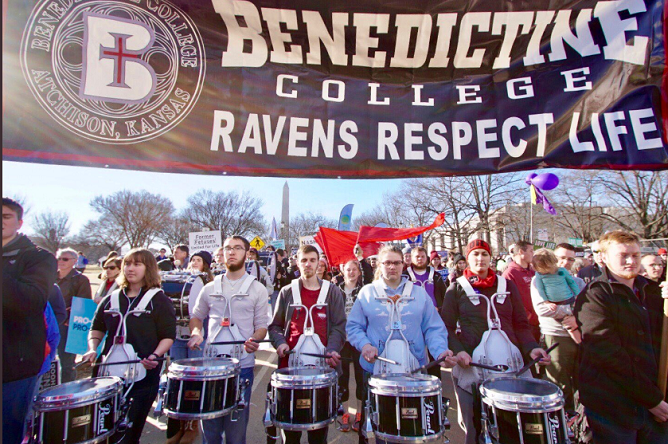 Four busloads of Benedictine College students, faculty, guests and administration begin a 1,100-mile, 27-hour journey to Washington, D.C., one student has reason to be especially glad.

Benedictine College’s participation in the March for Life changed the course of her life.

“We are the pro-life generation and we want everyone to know we’re not going to stop fighting for life,” said Kathryn Probst, the March for Life coordinator for Ravens Respect Life.

Probst, a Benedictine College senior from Boylston, Mass., has been a strong supporter of the pro-life movement since she was a child. Her mother worked at a crisis pregnancy center and began taking Kathryn to the March for Life when she was 11. Probst has attended almost every March for the past 10 years. It was even at the March where she first connected with Benedictine College.

“When I was a senior in high school, I saw this huge group from Benedictine College and they were leading the March,” Probst said. “I saw their enthusiasm for the cause and I wanted to be a part of it. That experience is one of the reasons I chose to come to Benedictine.”

Once at the college, she joined the Ravens Respect Life organization and began attending the March for Life with the group.

“When I was a freshman, I heard the March for Life organizer talking about how much it meant to her and how much it can help make changes for the better,” she said. “It was very moving to me and I knew I wanted to do that. I wanted to have an impact on others.”

Probst served as the March for Life recruiter last year and took over as the overall coordinator this year. She has worked to promote attendance at the March and has organized an expanded program, complete with a Mass at St. Peter’s Church in Washington, a Rosary in front of the Supreme Court building, and a gathering and Mass with other groups from the Archdiocese of Kansas City in Kansas.

This year, Probst added the possibility for Marchers to attend the Cardinal O’Connor Conference on Life, the largest collegiate pro-life conference in the nation, which will take place in Washington the day after the March.

“We’ve made such tremendous progress,” Probst said. “But there is so much more we have to do. When I graduate, I hope to work with a pro-life organization and continue to have an impact.”

The college’s trip to the March for Life started with Benedictine students who were interacting with the Kansans for Life organization. Then the school’s Knights of Columbus chapter took the lead and was a major promoter of the event. The first few years saw a handful of students go, but the numbers began to grow.  In 1989, students at Benedictine College became so focused on right-to-life issues that they formed the Ravens Respect Life organization, using the name of the Benedictine College mascot.