Catholics Can Transform the Immigration Debate 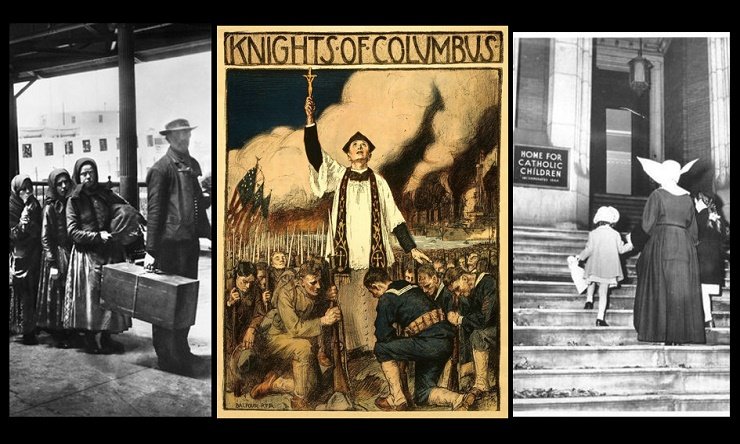 The Catholic Church is uniquely placed to transform the immigration debate. We’ve done it before. We can do it again.

I’ve seen it firsthand. When my mother was a little girl her family immigrated to the United States from Mexico, and my experience is not unlike other sons of immigrants. My favorite weddings — and my favorite Fourth of July celebrations — were with Mexicans, but I was never anything but thoroughly American.

My mom was Catholic to the end, confessing on a dry-erase board when A.L.S. took her voice and then receiving the Eucharist in her feeding tube. Her witness and the education she sacrificed to give me brought me back when I left the faith.

This is the way immigrant stories can go — if the Church is there to welcome them, educate them, and nurture their faith.

But however each skirmish works out, immigration is here to stay — as long as birth rates remain as low as they have been

“When there is an empty space, people try to fill it,” Pope Francis said during the Syrian Refugee crisis. “If a country has no children, immigrants come in and take their place. I think of the birth rate in Italy, Portugal and Spain. I believe it is close to zero percent. So, if there are no children, there are empty spaces.”

“The rate has generally been below replacement since 1971,” said the Centers for Disease Control’s National Center for Health Statistics. But “the decline in the rate from 2016 to 2017 was the largest single-year decline since 2010.”

Much in our economy depends on a robust population. We need enough workers to maintain domestic production, enough families to buy homes and other goods — and enough taxpayers to fund Medicare and Social Security. Jonathan Last spells out the consequences of the birth dearth in his book What to Expect When No One’s Expecting.

Meanwhile “Immigration Is the Only Reason the U.S. Doesn’t Have an Aging Crisis,” The Atlantic reports.

When a population stops having children, they need immigrants. That is where America is today.

But immigration is only a temporary solution to the birth dearth. Once immigrants come to the United States, they quickly adopt the lifestyles of Americans, including a lower birthrate.

They also assimilate in their faith life. According to CARA, only 57 percent of adult Hispanics self-identify as Catholic. As recently as 2006 that was 70 percent.

The Church is losing her sons and daughters.

Catholic Hispanics can be won over, however.

Nonetheless, the Catholic Church remains a natural home for Catholic immigrants — if the Church would only welcome them.

CARA reports that in 2006, 82 percent of Hispanics raised in Catholic families stayed in the faith. Today it’s 71 percent — but still 10 percentage points higher than non-Hispanics.

All the same, CARA reports that 85 percent of Hispanics say that their Catholic faith is an important part of their life and 83 percent are proud to be Catholic.

You can see that pride in their homes, where 2 in 3 have a statue or picture of Mary; around their necks, where 2 in 5 wear a crucifix; in their wallets, where they are far more likely to carry a holy card; and in their Catholic giving rate — higher than non-Hispanics.

This despite the fact that only 1 in 4 parishes specifically serve Hispanics — and only 45 percent of Hispanic Catholics register with a parish, with nearly half of those passing up the nearest parish for something better.

The Church has turned immigration from a “problem” to a “solution” in the past.

Italian immigrants grappled with high crime rates — and Irish immigrants were no different. The outrage against immigration in the 19th century was so intense that the American Protective Society attracted 2 million members to its cause.

The Catholic Church worked even harder, though, to welcome new members of the flock — and make them good citizens.

The Church built ethnic parishes, organized sodalities and embraced fraternal organizations such as the Knights of Columbus and the Ancient Order of Hibernians. The effort required imagination and an evangelical spirit. And it worked.

Pray to Our Lady of Guadalupe that it happens again.

Catholics know that the Blessed Virgin Mary specially visited our continent to leave her image and unite her Church to proclaim her son.

That image should be the banner of a new effort to integrate immigrants today, and her words to Juan Diego could be her message to the Church in America: “Listen, my child: There are many I could send, but you are the one I have chosen for this task.”

Immigration, Our Lady of Guadalupe