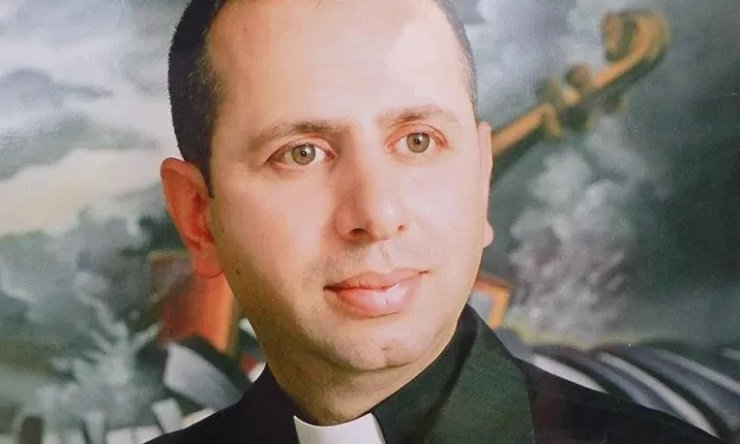 When I told the story of hero priest Father Ragheed Ganni to summer camp students at Benedictine College last month, I had to pause to regain my composure.

“I had no idea,” said a student in the back. “And sometimes I complain that I don’t feel like going to Mass!”

Now, 11 years after his death as a martyr, the sainthood cause for Father Ganni has been introduced.

Father Ragheed first came to international notice two years before his death, in 2005, when he spoke in Bari, Italy, at a Eucharistic congress.

That is when he explained what happened to his sister.

“On June 20 of last year, a group of young women were cleaning the church to get it ready for Sunday service. My sister Raghad, who is 19, was among them,” he said.

“As she was carrying a pail of water to wash the floor, two men drove up and threw a grenade that blew up just a few yards away from her.”

It was a miracle that she survived, but what happened next was even more extraordinary.

“For me and my community, my sister’s wounds were a source of strength so that we, too, may bear our cross,” he said. “Mosul Christians are not theologians; some are even illiterate. And yet inside of us for many generations one truth has become embedded: without the Sunday Eucharist we cannot live.”

Ganni spoke fluent Italian, after spending seven years in seminary in Rome. The Iraqi homeland he re-entered after his ordination in 2001 was very different from the one he left.

In his 2005 remarks, Ganni said, “Last August in St. Paul Church, a car bomb exploded after the 6 p.m. Mass. The blast killed two Christians and wounded many others.”

He added that the event was a “miracle” because only one bomb of many planted in a car went off. “Had they all gone off together the dead would have been in the hundreds since 400 faithful had come on that day.”

He also shared the story of the destruction of Our Lady of the Tigris Shrine on the vigil of the Immaculate Conception. “This and fundamentalist violence against young Christians have forced many families to flee,” he said.

Father Ganni also had an opportunity to flee.

He studied at the Pontifical Irish College in Rome, where he made fast friends with Irish seminarians with whom he spent summers in Lough Neagh in Northern Ireland, since he was banned from going home. Journalist Ed West described how his friends called Ragheed “Paddy the Iraqi” and arranged for the Irish hierarchy to offer him a parish after he was ordained in 2001.

Father Ganni refused. He was needed at home.

“That is where I belong, that is my place,” he said.

His emails to friends always begged urgently for prayers.

“His church was blown up. Their house was blown up. He was saying Mass in the basement. He continued on,” his friend, Father Don Kettle told West.

In one heartbreaking story, Ragheed was administering First Communion to children in the basement of his church as the sound of gunfire outside filled the room, terrifying the children.

Father Ragheed, frightened but calm, told the kids that the sound was fireworks celebrating their big day.

“The terrorists might think they can kill our bodies or our spirit by frightening us, but, on Sundays, churches are always full,” he said in Bari. “They may try to take our life, but the Eucharist gives it back.”

“There are days when I feel frail and full of fear. But when, holding the Eucharist, I say ‘Behold the Lamb of God, Behold him who takes away the sin of the world,’ I feel his strength in me,” he said. “When I hold the Host in my hands, it is really he who is holding me and all of us, challenging the terrorists and keeping us united in his boundless love.”

Two years later, on July 3, 2007, Father Ragheed was driving away from his church with his cousin and, in the car behind him, two deacons and one deacon’s wife.

Local thugs stopped the cars and dragged the woman away. One approached  Father Ragheed, shouting, “I told you to close the church, why didn’t you do it? Why are you still here?”

“How can I close the house of God?” asked Ragheed.

The men were offered a chance to convert to Islam, and when they refused were shoved to the ground and shot.

When the faith rebounds in our time — and it will — we will have martyrs like Father Ganni to thank.