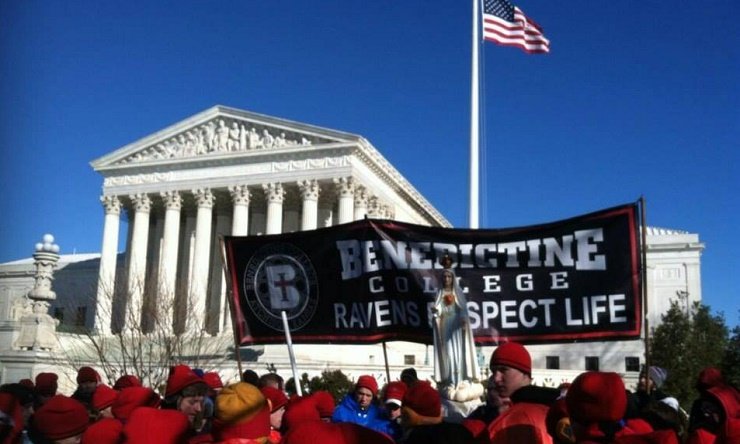 When Benedictine College started the Memorare Army for Religious Freedom in 2012, the future looked bleak for religious liberty in America.

But, close on the heels of the Colorado bakery decision, which the U.S. bishops applauded) the U.S. Supreme Court ruled in favor of the First Amendment this week — twice. In separate cases, a florist and Crisis pregnancy centers saw their rights to free speech and conscience upheld.

The cases are victories for the First Amendment but they are also warnings: As relativism grows, and truth is decided by power, not argument, we will see more and more attempts to use power to coerce others’ speech.

The two decisions cover two very different kinds of cases, but apply the same principle: The government can’t force people to act against their consciences.

On July 25, the court vacated a Washington state ruling against florist Barronelle Stutzman who told one of her regular customers that she was happy to serve him, but couldn’t participate in his same-sex wedding by creating the flower arrangements for it.

Both the ACLU (American Civil Liberties Union) and Washington State Attorney General Bob Ferguson sued the florist, seeking to force her to reverse her policy and violate her conscience in the future. The case has been winding its way through the courts for five years and is set to continue now, but with a strong precedent against it: the Masterpiece Cakeshop ruling.

In a separate action on July 26, the court ruled that a California law violated the free speech of crisis pregnancy centers. The 2016 law forced pro-life centers to advertise abortion on large signs. The National Institute of Family and Life Advocates, responsible for 1,500 pregnancy centers nationwide and 140 in California, challenged the law.

The court’s decision in the pregnancy centers’ favor, “Protects the right of all organizations to choose for themselves not only what to say, but what not to say,” said N.Y. Cardinal Timothy Dolan for the U.S. bishops.

Before the conclave that elected him Pope, Benedict XVI said “a dictatorship of relativism is being formed, one that recognizes nothing as definitive and that has as its measure only the self and its desires.”

When people convince themselves that truth is unknowable, differences of opinion become volatile. If “my truth” is just as valid as “your truth,” then disputes cannot be settled by seeking the truth. Instead, the most powerful wins the argument. If reason is taken away as a weapon, force is all that’s left.

The rulings are a step in the right direction toward restoring the American notion that my opponent’s freedom of speech is just as valid as my own.

“Governments must not be allowed to force persons to express a message contrary to their deepest convictions,” Justice Clarence Thomas wrote in the majority opinion in the pregnancy centers case. “Freedom of speech secures freedom of thought and belief. This law imperils those liberties.”

Image: Benedictine students pray a memorare at the Supreme Court after the March for Life.