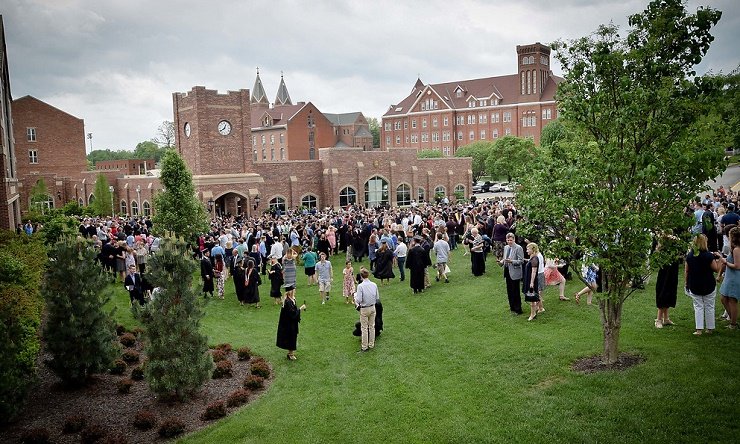 The Fran Jabara Award was established in 2002 to recognize graduating seniors who display exemplary leadership skills. Each year, the award is given to select graduating college seniors in Kansas.

Lind has been involved in almost everything on this campus during her four years in Atchison. She was a Student Government Association Senator, was a leader in the ENACTUS student business organization, was an Admission Office lead. She was a Student Ambassador and served on the Student Alumni Board. She was also a three-time ROC Leader —“She literally introduced the next three years of incoming freshman to Benedictine College,” said President Minnis.

“She helped build the faith on campus as a FOCUS student leader and served others through the March for Life and the Mission trip to Guatemala, where she helped build a church for a small village in the mountains,” he said.

Professionally, Annie received the American Advertising Federation of Kansas City Scholarship and helped run social media and produce videos for the college’s Marketing Office. She even did a Discovery Project on enrollment marketing.

She was a Project Management Intern at Bernstein-Rein Advertising in Kansas City last summer and this summer she will serve as an Associate Account Manager Intern at VML in Kansas City, where she will begin full-time employment in August.

Molly has been very engaged with the college during her time here.

“Always willing to help out, she participated in a major college marketing video when she was just a freshman,” said President Minnis. “She has been a Student Ambassador and was a lead student worker in the Office of Admission, where she greeted visitors and led countless tours.”

Molly also took on leadership roles in a number of organizations. She was the Chair of FIAT, a Marian women’s group on campus. She also served as president of the Student Alumni Board.

She has been active off-campus in the non-profit world as well. Two summers ago, Molly interned at the Centennial Institute in Denver as the Assistant to the Marketing Director and Assistant to the Event Planner.

Last summer she was the Direct Marketing Intern for Alliance Defending Freedom, an organization that defends religious freedom.

William Keiss,a Gregorian Fellow and an Economics and Philosophy major from Aurora, Colorado.

Kies “was a major influence on our young men for three years while serving as a resident assistant in Turner Hall,” said President Minnis. “His personality and faith were so strong that he was even named ‘Mr. Benedictine.’”

In addition to his double major, Will worked outside the classroom on various entrepreneurial ideas. He won the “Big Idea” competition and his Discovery Project on a collapsible boat called a “ki-back” was focused on entrepreneurism.

His faith life has been strong and he took the time to lead a pilgrimage to Chimayo, N.M., and introduced our students to the Santuario de Chimayo Shrine, often called the Lourdes of North America. In addition, he is a member of the Knights of Columbus and served as treasurer of that organization.

Professionally, Will worked as an accounting intern with Hercules Industries in Denver last summer and will take a full time job as a financial account representative at RTS Financial in Kansas City after graduation.