How I Began to Believe in the Real Presence 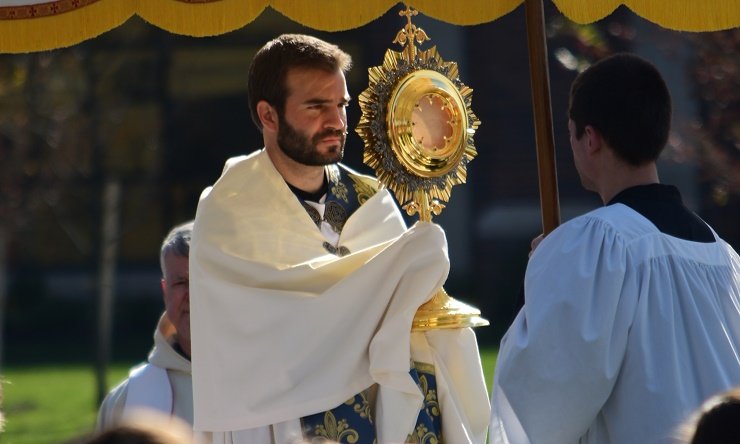 When friends told me in college that they believed that the Eucharist at Mass is not bread anymore but really Jesus Christ, truly present, I didn’t understand them.

“You mean you believe the bread recalls Jesus at his Last Supper, right?” I said.

No, they said. They didn’t believe there was any bread there at all, after the consecration. There was just Jesus. He only looked like bread.

Once I understood what they were saying, I thought they were crazy. In all my years attending the Catholic church, I had never been taught anything of the kind.

So first, they had to convince me the Church actually believes this.

Today, the Catechism exists, and it makes this doctrine very clear. But there was no Catechism back then — and so no simple way to find out if you were hearing real Church doctrine or someone’s peculiar ideas.

I think they looked it up in Ludwig Ott’s book to prove it to me. Whatever they did, I begrudgingly believed that the “Real Presence” was a real thing.

Stuff we Catholics did made more sense after that — genuflecting before getting into the pew, the priests cleaning the sacred vessels, and the many rules governing who can receive Communion.

Once I was convinced that the Real Presence was a real doctrine, however, I still thought it was crazy. Why would God want to take on the appearance of bread? Why would he want to be eaten?

After losing my faith in high school, I only became open to Christianity again because of Bob Dylan. I had bought all of his albums, and loved them all — even the Christian ones.

In the title song from his album Saved, Dylan concisely summed up his Protestant beliefs this way: “I was blinded by the devil / Born already ruined / Stone-cold dead / As I stepped out of the womb / By His grace I have been touched / By His word I have been healed / By His hand I’ve been delivered / By His Spirit I’ve been sealed / I’ve been saved / By the blood of the Lamb.”

And then he repeated it: “Saved, by the blood of the Lamb.”

But how could Jesus’ blood get from Palestine two millennia ago to save Bob Dylan, or me, today?

It does so spiritually, the Protestants believe. But I couldn’t believe in that. God did things in a much more natural way than that in every other instance I knew of. If God wanted the blood of Jesus to reverse what I had inherited from the blood of Adam, I thought, that blood had to actually be in me.

And that’s when I got it.

“Unless you eat the flesh of the Son of Man and drink his blood, you do not have life with in you,” Jesus said, “For my flesh is true food and my blood is true drink.”

He scared people with that kind of talk, reports John— but he meant it.

The apostles must have been relieved when they realized the role bread and wine would play in this ingestion of blood. St. Paul described it a couple decades after the Last Supper, in about the year 53.

That was it. You were saved by the blood of Jesus directly — not spiritually. Even Bob Dylan seemed to acknowledge it later in his career, when, after leaving his Christian sect, he sang, “I never could learn to drink that blood and call it wine.”

Scriptures filled out the picture for me. One in particular.

Lots of Scriptures suddenly take on new life, when you see that God is preparing the way for the Eucharist: Melchizedek’s bread and wine, the Manna in the desert, the Passover Lamb and the multiplication of the loaves.

But one made sense to me for the first time: The supper at Emmaus. In the story, Jesus meets two of his disciples after his death. They don’t recognize him until he breaks bread — then he disappears.

That never sounded real to me. Again, I didn’t like spiritualizing Jesus. He did earthy miracles, with water and spit and mud. He didn’t do magician’s tricks like vanishing into thin air.

The doctrine of the real presence of Jesus in the Eucharist makes his message clear: ”I am no longer with you in this form (my body) but in this form (bread).“

And so, I believed. And still do.