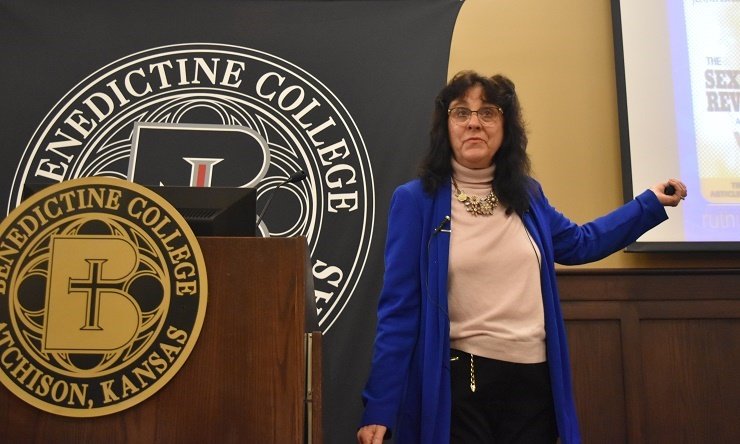 In a National Catholic Register article about Benedictine College’s 7th Annual Symposium on the New Evangelization, Mary Rezac explains how the college’s spring conference explored the prophetc nature of Blessed Paul VI’s 1968 encyclical “Human Life: On the Regulation of Birth.”

“The Symposium is a think-tank for the New Evangelization,” Dr. Matthew Muller told Mary Rezac of Catholic News Agency and EWTN news. “The reception of Humanae Vitae is an ongoing process in the Church, and events like the Symposium help to encourage a deeper appreciation and integration of the Church’s teachings,” added the Benedictine theologian and Gregorian Institute program director.

“In his talk, Archbishop Cordileone noted the dissonance in a society that on the one hand accepts divorce, contraception and all kinds of sexual deviance as normal, and on the other hand is baffled when thousands of women complain of sexual harassment as part of the #MeToo movement,” Rezac reported.

“This is another major head scratcher for me. The whole point of these last 50 years was supposed to be liberation,” Archbishop Cordileone said. But “no one dares to suggest that the problem is [the sexual revolution] itself.”

Rezac said that Dr. Brad Wilcox, professor of Sociology at the University of Virginia and director of the National Marriage Project, agreed.

She reported that in his keynote address, “Wilcox noted that while the upper and middles classes say they are increasingly tolerant of family structure diversity and deviance from the two-married-parent household norm, they are usually more traditional in practice, while the poor are left to suffer the consequences of a culture that no longer values marriage and family.”

College-educated and more affluent couples tend to get and stay married, Wilcox said. “By contrast, poor and working class Americans are less likely to sustain high quality marriages and their kids are more likely to be exposed to some kind of instability,” he said, citing single parenthood, cohabitation, divorce and even abuse.

Rezak pointed out that the final keynote, Dr. Jennifer Roback Morse, “said that the sexual revolution had three main objectives: to separate sex from babies, to separate both sex and babies from marriage, and to wipe out all differences between men and women.”

“We’re talking about a whole society built around the premise that adults can have whatever sexual activity they want and never have a baby, unless they want the baby,” Morse said. “That is irrational to believe that that is possible. That is a fantasy.”

Read Rezac’s entire article to see how the Symposium keynotes said this “fantasy” became a nightmare.

Humanae Vitae, openness to life, Symposium on the New Evangelization