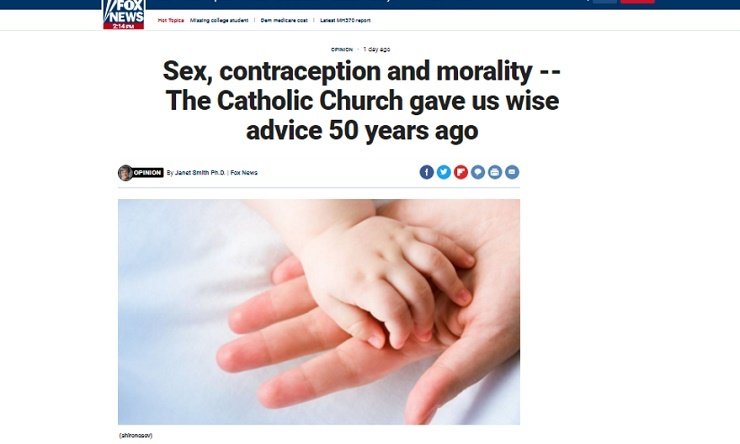 Church teaching was defended in the national media this summer and Benedictine College helped.

As Catholics celebrated the 50th anniversary of soon-to-be Saint Paul VI’s encyclical on birth control, it was hard to find a vigorous defense of its teaching in the secular media.

Dr. Janet Smith changed that by publishing her column “Sex, contraception and morality — The Catholic Church gave us wise advice 50 years ago” at Fox News.

“One conference held at Benedictine College featured workshops with 60 speakers — most of them young professors, graduate students and individuals involved in pastoral work,” she wrote.

“If the critics of Humanae Vitae dug a little deeper, they might be surprised at how much enthusiasm for the teaching they would find,” she wrote. “There are over 35 conferences this year on the encyclical in the U.S. alone.”

Janet Smith is author or editor of numerous books on ethics, including Why Humanae Vitae is Still Right. She holds the Father Michael McGivney Chair of Life Ethics at Sacred Heart Major Seminary in Detroit.

“American bishops are preaching on Humanae Vitae this year and encouraging their priests to do so as well. It is highly likely that many bishops will issue strong statements in support of Humanae Vitae, such as the beautiful treatment of the encyclical in ‘The Splendor of Love’ by Bishop Samuel Aquila.

“There is a rapidly growing number of Catholic lay people who have organizations and blogs that support the teaching and promote methods of natural family planning. One study shows that 37% of Catholic women ages 18-34 who go to Mass every Sunday and to confession once a year accept the church’s teaching on sexual issues. …

“More and more people — many of them young — are beginning to realize that the view of sexuality embraced and promoted by our ‘anything goes’ culture is just not working. …

“Today’s young people — who often develop their understanding of sex from pornography and who have engaged in the demoralizing activity of “hooking up” — just might find in Humanae Vitae the antidote to those poisons.”

The Benedictine College symposium on Humanae Vitae was also covered by the National Catholic Register and Catholic News Agency.