Mother Goose and Me 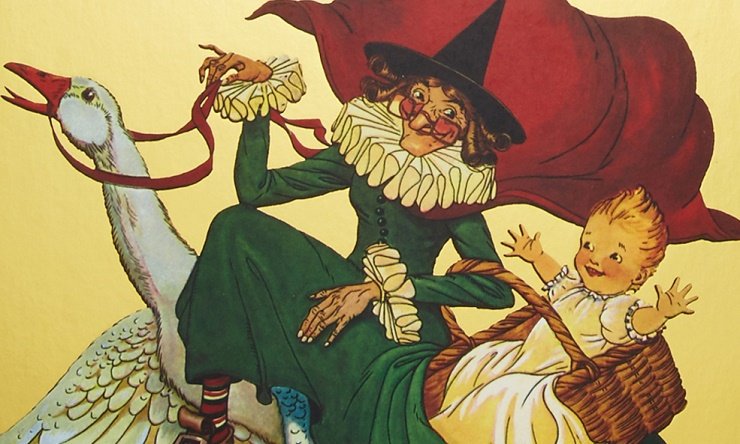 I remember being in awe of The Real Mother Goose as a child — the black and white check-patterned edition illustrated by Blanche Fisher Wright that was first published in Great Britain 100 years ago. There were other nursery rhyme books, but none that made that stark claim to authenticity.

This was the real thing, I thought, by the real woman — and it scared me to death.

I was convinced Mother Goose was a witch, and not just because of her pointy hat. Her mind dwelled casually on horror, the way a witch’s might: She wrote about husbands trapping wives in pumpkins, live birds being baked into pies, and of a wee pale figure peeking in windows at night.

Reading The Real Mother Goose was like hearing your nightmares sung to ice cream truck tunes. That the illustrations were commonplace instead of creepy only reinforced the strangeness.

My mother made the book even scarier by darkly suggesting that there was a deeper meaning to the poems: They were about the Great Plague, child sacrifices at the London Bridge, and political assassinations.

With all these evils associated with it — witchcraft, violence, death, deceit — it’s no wonder I loved it so much as a boy. To this day, the cadences of the rhymes, the melancholy characters, and the poems’ weird, indirect lessons are engraved on my mind.

I almost hesitate to inform readers that nearly all of the wicked undercurrents my mom saw there were myths. There never was a Mother Goose. Some of the best-known nursery rhymes in this book originated in America (where The Real Mother Goose appeared first) — including “Rock-a-Bye Baby” and, possibly, “Ring-a Round-a Rosy,” which has nothing to do with any plague. The poems also do not make sophisticated political allusions. Humpty Dumpty, for instance, is a riddle to which the answer is “an egg.”

In the end, the book isn’t evil on the one hand or esoteric on the other. It’s a celebration of ordinariness. Its characters show how the unlikely and the strange reveal the value of the commonplace.

There was an old woman
Lived under a hill
And if she’s not gone,
She lives there still.

Like St. Paul, she sees the importance of the diversity of vocations …

And if the great man took the great axe,
And cut down the great tree,
And let it fall into the great sea,
What a splish splash that would be!

There were once two cats of Kilkenny,
Each thought that was one cat too many;
So they fought and they fit,
They scratched and they bit,
Till, excepting their nails
And the tips of their tails,
Instead of two cats, there weren’t any.

May we, like the clock,
Keep a face clean and bright,
With hands ever ready
To do what is right

In the calendar, she sees the joy of temperance:

Christmas comes but once a year, and
When it comes it brings good cheer.

As a child, I was alarmed by the chillingly blasé way one poem announced the drowning of “Three Children on Ice” (“As it fell out, they all fell in”) and how another cruelly condensed the life and death of Solomon Grundy. As a parent, I see that they had precisely the desired effect — to frighten kids about icy ponds, and allow them to accept mortality anyway.

God writes straight with crooked lines and Mother Goose is made in the image and likeness of God.

There is a humility in her nonsense — a willingness to see that life is a mystery that we will never figure out and that the miraculous and the improbable are as ordinary as a swan.

Mother Goose wants us all to experience life with the wonder and gratitude of the farmer who said: