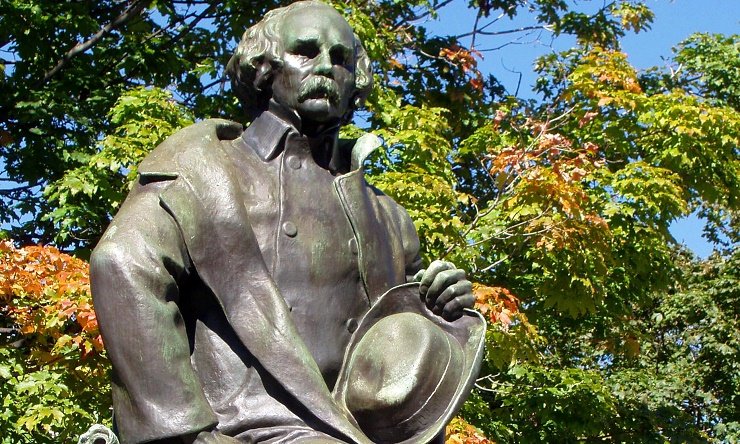 He was the father of a Catholic nun and was himself a deep thinker on matters of the spirit.

You’ve rejoiced in Nathaniel Hawthorne’s Puritan-bashing in “Young Goodman Brown.” You’ve reveled in his rejection of scientism and perfectionism in “The Birthmark.” You may even have shared some of Hester’s redemptive suffering in The Scarlet Letter.

One of Hawthorne’s lesser-known works, however, takes on a whole different problem, one uncannily appropriate to our day.

“The Procession of Life” is a speculative story that groups people in the great walk of life according to what they really have in common. It’s a counter-intuitive look across time and space that is also a shot across the nose at Hawthorne’s pantheistic or monist-leaning contemporaries. Are you sure, he seems to say, that unity is the most important thing of all? And if it is, are you willing to minister to people in what really afflicts them?

Appropriately, the categories in which Hawthorne finds the most people fit each have a corollary to the classic spiritual or corporal Works of Mercy. So while Hawthorne may not use the wording we’re accustomed to, the Works of Mercy come through loud and clear.

Hawthorne discusses physical diseases first of all. With a bit of satire, he writes, “More than any other circumstance of human life, disease … pays due observance to the distinctions which rank and wealth, and poverty and lowliness, have established among mankind.” Pushing back against popular notions of unity as a noble equalizer, Hawthorne wryly comments that “the bond of mutual disease…makes the king a brother of the clown.”

Hawthorne acknowledges the great poets, linguists, philosophers, and thinkers who often lead society and at the same time wed themselves to it. They possess the gift of intellect. Importantly, Hawthorne avoids any intellectual elitism: “He whose genius appears deepest and truest excels his fellows in nothing save the knack of expression…[the] truths of which every human soul is profoundly, though unutterably, conscious.”

Hawthorne writes next about “the sacred bond of sorrow.” So pervasive is sorrow that it “has gone far and wide, and high and low, and left scarcely a mortal roof unvisited.” Distinguishing it from mere “broken hearts” and the ennui of “idleness,” Hawthorne writes that true dolor “is such a leveller, with its own dignity and its own humility, that the noble and the peasant, the beggar and the monarch, will waive their pretensions to external rank.”

No matter what the vice, crime “is an awful summons” in which “a forger from the state prison seizes the arm of a distinguished financier.” Lest anyone think he might be immune to the call of crime, Hawthorne profoundly observes that “nothing is more remarkable than the various deceptions by which guilt conceals itself from the perpetrator’s conscience, and oftenest, perhaps, by the splendor of its garments.”

Feed the hungry and give drink to the thirsty

“Then let the summons be to those whose pervading principle is Love,” Hawthorne continues. No one is excluded from this category who has in his soul “something that may expand itself into a heaven, both of well-doing and felicity.” It is a large group, from “the man of wealth, who has bequeathed the bulk of his property to a hospital,” to the local missionary, “who has made himself familiar with the infected alleys and loathsome haunts of vice in one of our own cities.”

Next comes the group of “mortals who…have lost, or never found, their proper places in the world,” Hawthorne writes. Here can be found “members of the learned professions, whom Providence endowed with special gifts for the plough, the forge, and the wheelbarrow, or for the routine of unintellectual business,” as well as “Quakers with the instinct of battle in them; and men of war who should have worn the broad brim.” Most tragically, this group includes “the most unfortunate of men, whose purpose it has been to enjoy life’s pleasures, but to avoid a manful struggle with its toil and sorrow.”

Bury and pray for the dead

Hawthorne brings the procession to a close with “The Chief Marshal…Death!” While Hawthorne acknowledges the Romantic trope of death as the great equalizer, he adds a crucial eschatological truth: “Death, hitherto our leader, deserts us by the wayside…He knows not, more than we, our destined goal. But God, who made us, knows, and will not leave us on our toilsome and doubtful march, either to wander in infinite uncertainty, or perish by the way!”