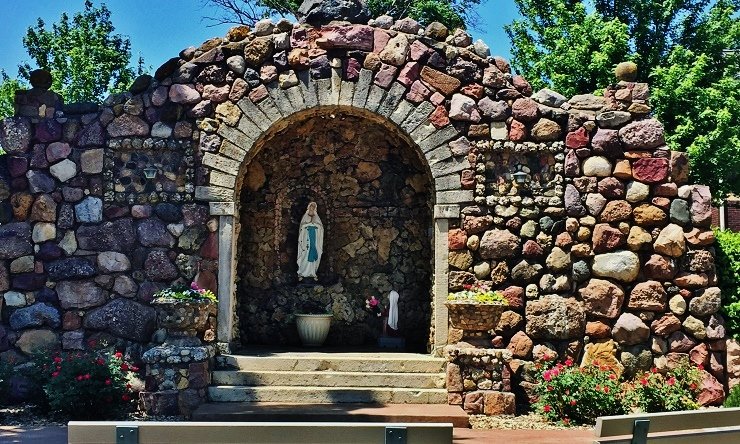 The people of the small town of St. Benedict, Kansas, will be remembering their war dead on Memorial Day. But they won’t remember any from World War II, Korea, or Desert Storm.

The town has sent many young men to each, but none were lost. Local Catholics credit the Rosary.

Larry Buessing remembers St. Mary’s Church in the tiny town of St. Benedict as the church his grandfather helped build in 1893. “He was a little boy and he led the mule that raised the rock to put in place for the church,” he said.

The church, built by the Benedictines of Atchison, Kansas, is plain on the outside, but breathtakingly beautiful inside, such that it was a finalist for one of the “8 Wonders of Kansas” in a recent statewide contest.

“Faith was not extraordinary for those German farmers,” said Buessing. “It was a faith-filled community.”

That faith included the Rosary, whose 15 original mysteries are referenced in art on the church walls. Outside, the church added a grotto in 1936, using rocks from nearby farms.

Lilian Engelken, a parish secretary at St. Mary’s for 28 years, heard stories about how the grotto was built.

“The young men of the parish helped bring the rocks,” she said. They were the same young men who would later be sent to Europe and the Pacific to fight the Axis Powers.

When war broke out, said Lilian, the parish pastor told us, “We’re going to say the Rosary for our servicemen.”

And that they did, every night at 7:30, “after chores were done” – weather permitting. In inclement weather they prayed in the church instead.

Engelken remembers more than 50 young men headed off to war. Every single one came back.

“Based on records from local county newspapers of that time, it is concluded that the Frankfort community lost more men in World War II than any other town of similar size,” said Sen. Pat Roberts, upon entering all 32 names into the Congressional Record in 2005.

The miracle of the Rosary is remembered by parishioners to this day. 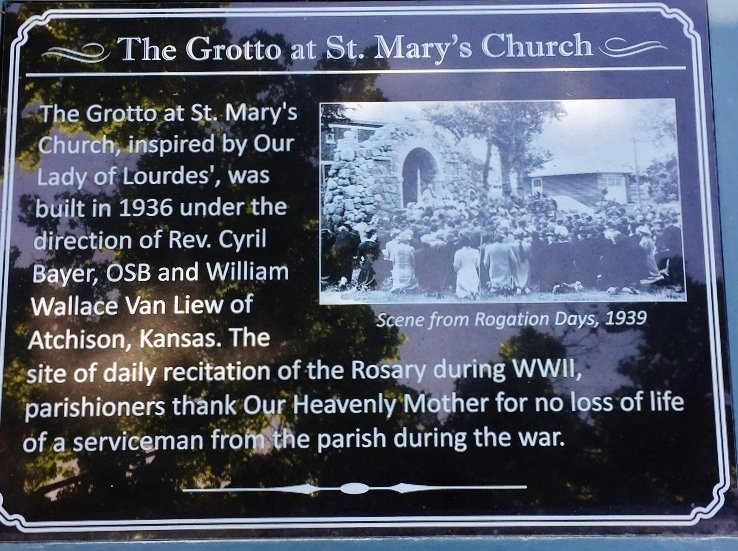 “Some of us do remember going and we were quite little. I was 5 years old when World War II started,” Lilian said. “The priest said, ‘Let’s pray outside at the grotto on our knees and ask for them to come back.’ And they all did.”

When the Korean War broke out, the town sent more men overseas, and prayed more rosaries. Again, no casualties were lost. The practice was remembered in 1991 when Desert Storm brought troops to Kuwait. Again, the town gathered for prayers. Again, “St. Benedict boys” were spared.

“We had three neighbor boys who went to war, and two or three who lived half a mile the other direction. I was young but I knew them because of older brothers and sisters,” Lilian said. “They all came back. Our Lady was good to us.”

There are other more dramatic miracles of the Rosary from World War II — there were the eight German missionaries who prayed the Rosary daily in Hiroshima, Japan, during World War II, and walked away unscathed after the atomic bomb destroyed everything around them on August 6, 1945. There were also Austria’s daily rosaries to fend off communist takeover after the war was over.

But the miracle of the Rosary at St. Benedict, Kansas, reminds us how Our Lady takes cares of the humble, the dedicated and the devout who pray for peace, war after war.


This appeared at Aleteia.
Photos above by David Huerter.