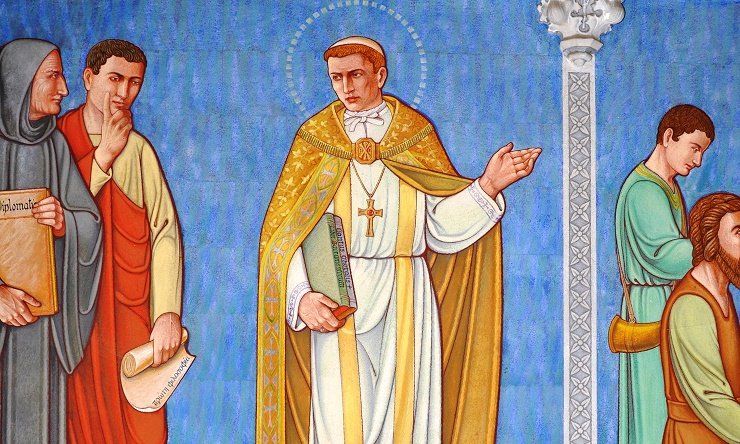 The most important book on Christian leadership ever composed was not written in the last 10, 20, or 100 years. It did not have the endorsements of well-known public Catholics. Its author did not go on a publicity tour. He did not sit down with Catholic media for a series of promotional interviews. Despite all this, it was one of the most important books in Christian history and set the model of Christian leadership, secular or ecclesial, for a millennia.

The book was St. Gregory the Great’s Liber regular pastoralis, or Book of Pastoral Rule. Written in 590, Gregory initially sent copies to the archbishop of Ravenna, and, a few years later, the Bishop of Seville. It was the programmatic essay of his pontificate, and it became an instant classic. It was so popular that it was one of few books from the Latin west translated into Greek for the Eastern empire. The historian Jean Leclercq wrote that, according to St. Gregory the Great, “The Christian life is conceived of as, above all, a life of detachment and desire: detachment from the world and from sin, and an intense desire for God.” (The Love of Learning and the Desire for God, 29). In the Book of Pastoral Rule, Gregory applied this vision to Christian leadership.

Despite its age, it is a book that is timeless. I wish I had read it before I served as a FOCUS missionary or taught high school theology. Gregory warned that those who, “crave the opportunity to teach what they have not yet learned, and who appraise lightly the burden of authority in accordance with their ignorance of the magnitude of its strength, let them be censured at the beginning of this book.” He went on, declaring in the poignant fashion of the rest of the book, “Because these same persons strive to teach while still ignorant and flailing, let them back away from the precipice of their ambition at the very outset of our discourse.” (28)  After I read these words, I regretted not knowing about the Book of Pastoral Rule earlier. Today, I assign it in to undergraduates preparing to serve as missionaries, teachers, catechists, and youth ministers.

Too often, Gregory warns, people seek leadership in the Church as a mask for their real desire for fame, control, honor, or riches. “It is worldly gain that masks itself under that type of honor, when in fact, worldly gain should be destroyed.” (41) For Gregory anyone who desires leadership should immediately reconsider. His warnings are fitting for our current situation, as he states plainly, “No one does more harm in the Church than he who has the title or rank of holiness and acts perversely.”(28)

On the other hand, he reprimands those who have the necessary virtue and fail to take on leadership. They show a lack of charity by hiding their gifts. “He who abounds in the virtues but refuses to feed the flock of God is found guilty of having no love for the supreme Shephard.”(36) Gregory advises that those who think they are called to leadership need to have more than good intentions. They should look back at their previous actions, and judge their works prior to being a leader, “for no one is able to acquire humility while in a position of authority if he did not refrain from pride when in a position of subjection.”(42) Thus, Gregory instructs, “let everyone discover what he is from his past life, so that the fantasy of his thoughts does not deceive him because of his desire to lead. For it is very often the case that the discipline of good works, which was maintained in a time of tranquility, is ruined in the assumption of leadership.”(42)

Gregory’s pastoral wisdom is on full display in Chapter 3, where he describes pastoral approaches to a variety of contrasting situations. He gives advice on counseling the young vs. old, rich vs. poor, joyful vs. saddened, as well as, those who are successful in the world vs. those who are unsuccessful, those who sin venially often vs. those who sin mortally infrequently, those who boast about their sins vs. those who confess them but do not refrain from doing them. A few examples are necessary.

For how to instruct married people vs consecrated religious, Gregory taught married couples: “The married should not  … worry themselves so much about what they must endure from their spouse but consider what their spouse must endure on account of them. For if one really considers what must be endured on his account, it is all the easier to bear the things of others.”(171) For consecrated religious, Gregory warned that they not be outdone by married people, “For since they were free and all the more able to do greater things, if they were negligent, they will be even more deserving of punishment.”(173)

Gregory’s advice was rooted in his time spent with Benedictine monks and is rooted in the Rule of St Benedict. In the pastoral situations he addresses, Gregory applies St Benedict’s rule that the Abbot, “must arrange everything so that the strong have something to yearn for and the weak have nothing to run from.” (RSB, 64:19)

In closing, Gregory compares the Christian leader who pursues worldly honor and notoriety to an adulterer or a prostitute. Rather than remaining faithful to their vocation to Shephard the flock of Christ with humility and sacrifice, they corrupt themselves due to their “lust for praise.”(210)

Sadly, the wisdom in Gregory’s admonitions and his concern about worldly attachment has been put on display in a striking way in recent days and weeks. His book is timeless in its awareness of the realities of sin and misplaced desire. But because of its timelessness, it also points a way forward in the midst of corruption and scandal. The way forward is a return to leadership in the image of Christ the Good Shephard, and an understanding of humility and conversion found in the Rule of St Benedict.