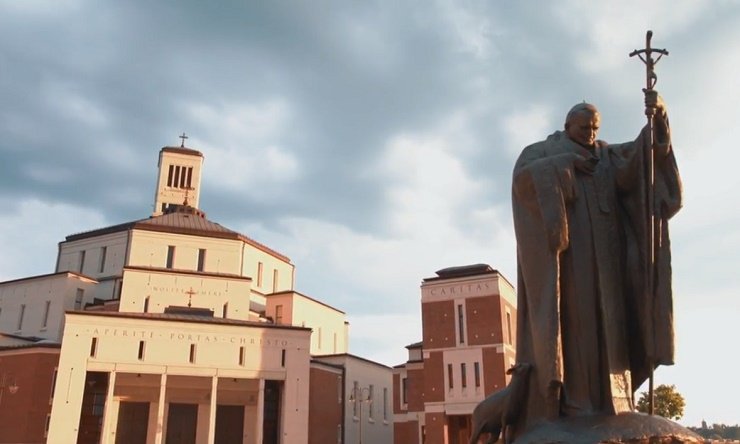 A relic of Saint John Paul II will be on the Benedictine College campus in Atchison, Kan., on Monday, Oct. 15, the eve of the 40th anniversary of his election to the papacy. The relic, a drop of blood on a cloth, will be available for veneration from 9 to 10 p.m. in St. Martin Memorial Chapel on the lower level of St. Martin Memorial Hall after Adoration, which will begin at 8 p.m. The relic has traveled from the saint’s country of birth, Poland, as part of the John Paul II Project, a Kraków-based initiative combining pilgrimage and study to teach about the pope’s legacy.

“How beautiful that we will bring JP2’s relic for veneration on the exact day that marks the 40th anniversary of his papal election,” said Corrine MacDonald, one of the founders of the John Paul II Project.

Corrine and her husband, Joseph, launched the project in 2016 in Florida, but decided to relocate to Kraków in 2017 to take advantage of the study abroad experience. The couple received the relic from Cardinal Stanislaw Dziwisz, the archbishop emeritus of Kraków and close adviser and friend of John Paul II. They are taking the relic on a tour of American colleges, churches and religious sites.

Macie Frakes, a Benedictine College junior, attended the study abroad program with the John Paul II Project over the past summer. She convinced the founders to bring the relic to Atchison during their tour.

“I wanted to help bring the relic of JPII to our campus so that students could meet the person of JPII,” Frakes said. “I believe that as young Catholics we have a lot to learn from the person of JPII and here at Benedictine College, young missionaries are being formed that will be sent out and truly transform the culture with love.”

As part of the study abroad program with the John Paull II Project, Frakes attended academic sessions at the Pontifical University of John Paul II in Kraków and participated in cultural trips through Kraków, Warsaw and John Paul II’s hometown of Wadowice. The group also visited many religious sites, including Wawel Cathedral, the Shrine of Our Lady of Czestochowa and the tomb of Blessed Jerzy Popiełuszko.

“My time in Poland opened my eyes to the way every Christian should be living their life,” said Frakes. “There are so many things I learned in Poland that I believe will help me build the civilization of love and truth here in the U.S. and continue the legacy of JPII.”