The following is an excerpt from the address of Benedictine College President Stephen D. Minnis at the school’s Aug. 28, 2018 Convocation.

We are gathered to begin a year-long celebration of our 160th Year Anniversary.

Benedictine College and its founding institutions, St. Benedict’s College and Mt. St. Scholastica College, have been educating men and women within a community of faith and scholarship for 160 years. That is an impressive accomplishment. Over 80% of all the colleges founded before the Civil War did not survive into the 21st century; there are 250 Catholic colleges and universities in America and there only about 17 as old as we are. We have not only survived, but we continue to thrive so that we are now the largest independent college in the state.

Benedictine College is built on a heritage of transformation; the Benedictine order has been one of the most significant agents of transformative change in the history of Western Civilization. When St. Benedict composed his Rule, and began founding monasteries, 1,500 years ago, his world was in chaos. The Roman Empire had disintegrated; Theodoric the Ostrogoth held the throne. Europe had slipped into the dark ages. The great Roman road system was slowly decaying. Commerce had dwindled to a trickle; travel was difficult and dangerous. The villages of Christian Europe were virtually defenseless, and invaders from beyond the borders of the Roman Empire would sweep through without warning, burning, looting and pillaging the scattered settlements. Life was hard, and generally short. Hunger, disease, and violence were constant threats.

As life became increasingly difficult, another threat emerged — the gradual loss of literacy. Fewer and fewer people were able to read and write, and the great intellectual heritage of the west began to slip away. This was the world in which St. Benedict and his sister St. Scholastica founded the Benedictine order. Men and women who embraced the Benedictine way of life were called to do all things Ut in omnibus glorificatur Deus (so that in all things God may be glorified).

They did not seek the recognition of the world; they didn’t launch crusades or fight wars or seize empires or amass great wealth. Instead, they prayed, day in and day out. And, in addition to praying, they worked. Some of them became great saints, making an indelible mark on the world, like St. Gregory the Great and his fellow monk, St. Augustine of Canterbury, who brought Christianity to the pagan kingdoms of England.

Mostly, however, they were not noticed in this way. Thousands upon thousands of monks and sisters whose names we don’t know simply devoted themselves to the life of prayer and work that St. Benedict’s Rule proposed. Through their quiet, dedicated, largely hidden work, they transformed the world.

If you consider the world we live in today, it is amazing how many institutions and achievements that we take for granted sprang from the Benedictine monasteries that preserved western culture: The Benedictines cared for the sick, and their work led to the modern hospital. Their hospitality — providing safe and secure lodging for travelling merchants — allowed commerce to re-emerge. Benedictine herb gardens were the original source of the healing salves and ointments that ultimately served as the basis of the modern pharmaceutical industry.

The Rule of St. Benedict provided a model of justice and consistency in a world in which force and fear held sway — as Pope Benedict XVI has pointed out, Saint Benedict is “the lawgiver of the West.” The Benedictines provided the modern cycle of liturgical readings, the great heritage of sacred music, even the modern calendar.

They preserved manuscripts, copying them by hand, and, above all, they kept the intellectual heritage of Western civilization alive. Everywhere they founded monasteries they undertook the responsibility of educating the young. From these monastic schools, the great universities — Bologna, Paris, Cambridge and Oxford, and, eventually, Benedictine College—emerged.

And so the Benedictine commitment has continued through the centuries, and right here in Atchison we have become a part of this great story.

Of course, 160 years ago, things were much different than today.

Here in northeastern Kansas, they were much worse. Not only was this the lonely and remote edge of the western frontier, plagued by natural disasters, hordes of voracious insects, and deadly epidemics; it also was the focus of the increasingly violent run-up to the civil war.

Into to this bleak and bloody environment, a lone monk, Fr. Henry Lemke, came to serve the needs of the isolated Catholics. Fr. Lemke recognized a need and heard God’s call, and by his persistence his abbot, Boniface Wimmer — of “Forward, Always Forward” fame — was persuaded to send more monks to start a new Abbey out here on the edge of the trackless wilderness. 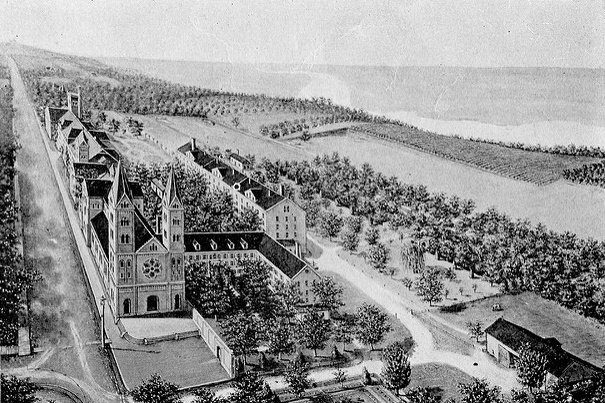 Life was hard, but the monks and sisters followed the heritage of St. Benedict. Over the years, they braved hardships we can hardly imagine. War, disease, economic devastation all have made their mark upon this community.

Yet through it all, they followed the Benedictine path, seeking not to be noticed by the world, but rather to do all things for the glory of God. Through this quiet, persistent pursuit of God’s glory, they educated bishops, abbots, prioresses; they educated doctors, bank presidents, judges, college presidents, and entrepreneurs.

They educated a young woman from Kenya, who had come to this country with nothing more than the possessions she could carry in a single suitcase and a burning desire to learn—to better herself and her country. This was Wangari Maathai, who in 2004 became the first person educated at a Catholic college in America to win the Nobel Peace prize.

The Benedictine heritage of work and prayer literally transformed lives, and continues to transform lives here at Benedictine College. The lesson of the Benedictines I hope you will take with you is that, here, today, we are all a part of something greater than ourselves. The Benedictine Order preserved western culture and right here in Kansas built one of the great Catholic colleges in America.

In order to make this heritage our own, we must follow the lead of those who have gone before us.

We are called to transform the world through our commitment to excellence in the Benedictine tradition. Each and every one of us has been given a priceless gift, preserved over the centuries — and it is up to us to live up to this great legacy.