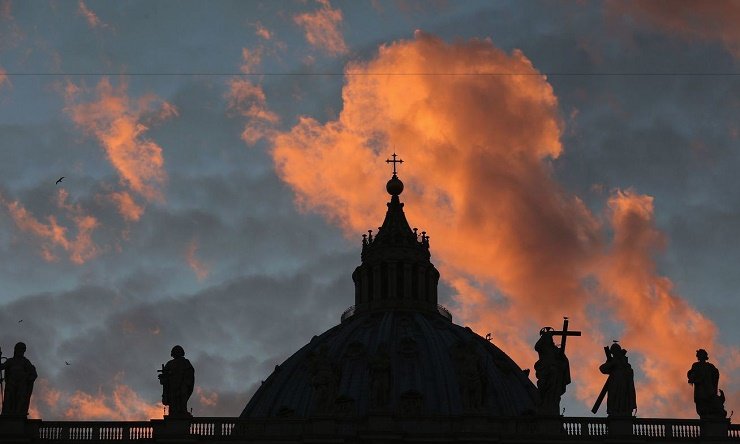 I still feel a cold lump in my gut when I remember the day the bell of St. Benedict’s Abbey  tolled over and over again for 10 minutes starting at 1:00 pm (8:00 pm in Rome) to mark the resignation of Pope Benedict XVI.

I have written elsewhere about the phrase that occurred to me at that moment: “We have no pope.” But that isn’t the right phrase. We did have a pope. He just stopped being pope.

The chair of Peter wasn’t just vacant, it was vacated. He resigned, bowed out, retired — abdicated, if you prefer. But it was as strange as it is when your favorite uncle leaves your aunt. The Vatican website posted the words Apostolica Sede Vacans next to a folded umbrella — a surreal, dreamlike image, that only added to the strangeness of that awkward interregnum.

I said at the time that the Universal Church after Benedict left felt like my parish church on Good Friday when the tabernacle was empty. The Eucharist was there, but staying weirdly off to the side. So it was for Benedict.

I didn’t fault him for it, I didn’t consider it a Great Refusal, I didn’t think he is stepping off a cross. In fact, he integrated his resignation seamlessly into the liturgical calendar, so that his departure would deepen our Lenten fast and his successor’s election would broaden our Easter joy. But that didn’t make it any less weird.

As I write this, his picture is still sitting on the floor against the wall behind my desk. He was the first pope whose picture I displayed in my personal space, and, so far, the last. I owe my faith to St. John Paul II and I wrote a book about Pope Francis, but Benedict XVI is my favorite. He wrote with such clarity and subtle power that he taught me not just what to think, but how to think.

It wouldn’t do to keep his picture up, but I also can’t bring myself to get rid of it.

That is very much the decision he made, too — resigning the papacy but hanging around the Vatican Gardens, like Obi Wan Kenobi in the original star wars trilogy — always there but never there.

I feel grateful that I lived at the time when he was Pope, and I still read him often — for a long time it was every day. His clarity and precision is exactly right for a pope.

I have shared the story a couple of times of my brief, awkward encounter with Cardinal Joseph Ratzinger, before he became pope. I was in Rome for the Jubilee Year staying at the Residenza Paolo VI a stone’s through from St. Peter’s Square.

All my life I have loved going on early morning walks after big events — after college football games or parades or on the fifth of July. So I walked out in the early morning onto St. Peter’s Square to witness what this place was like after everyone had gone home and before everyone returned.

I wound in and out of the pillars and started heading over to the obelisk when I saw an approaching figure in an overcoat headed toward a side door at St. Peter’s. It was Cardinal Ratzinger. I stood in his path and stared. It was obvious to him that I recognized him. He smiled and gave me a nod before redirecting his steps to pass me by a wide berth.

I remembered that day with some poignancy as I watched footage of the helicopter rising out of St. Peter’s Square.

By then I had seen him “being pope.” I had seen him in Washington, D.C., engaging with crowds and giving his strange “piano wave” where he fluttered his fingers in the air. I had seen him give grave remarks in grave locations and light remarks in informal locations. He had seen him do all that was expected of him, meticulously well. He did his duty before God and man — a true German on the seat of Peter.

But in the end, he did the same thing to us all that he did to me back then, didn’t he? He gave us a wide berth and slid into the Vatican by a side door.

This appeared in Inside the Vatican marking the anniversary of the resignation of Pope Benedict XVI.