The Hour of the Laity, Now More Than Ever 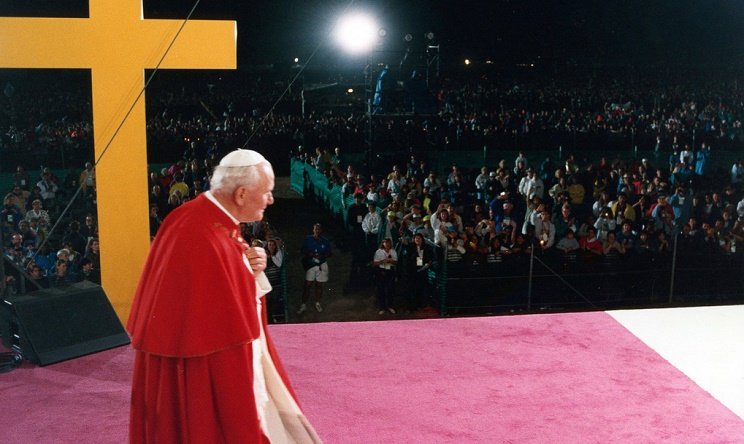 The Church is in trouble. Bad trouble. But has the hero come in the nick of time?

As the year 2000 approached, lay people heard the message, loud and clear, from Pope John Paul II in Denver:

“At this stage of history, the liberating message of the Gospel of Life has been put into your hands, and the mission of proclaiming it to the ends of the earth is now passing to your generation.”

The Catechism said the same thing: “Lay believers are in the front line of Church life … permeating social, political, and economic realities with the demands of Christian doctrine and life.”

Then, as the new Millennium dawned, John Paul told us over and over again, in the words of Catherine of Siena, “If you are what you should be, you will set the world ablaze.”

The hour of the laity was upon us. We were ready to take on the world.

But then the scandals hit.

By all rights, this should have been the final clarion call. With our bishops and priests hampered, the job of advancing the kingdom was ours more than ever. It was a fight or flee moment. Many fled.

We’re all familiar with heroes who come in the nick of time. It is ingrained in the three-act structure of our movies: In Act One, the hero does hard things, triumphantly. In Act Two, the hero gets a little soft and a little lost, and starts to forget who he is. In Act Three, troubles overwhelm the hero; he is a goner for sure — until his spirit awakes and he battles back, at the last minute, but just in time.

In its third millennium, the Church desperately needs a strong Act Three.

You could oversimplify the history of the Church in the West like this:

In Act One, the first millennium, the Church emerged from the catacombs to conquer the Roman Empire, then carry forward the light of Western Civilization as the Empire fell.

In Act Two, the second millennium, trouble started to get the best of us. First came the Great Schism, then the Protestant Reformations — and then the West, the cradle of the Church, descended into disbelief. Now, scandals, scientism and secularism seem poised to defeat the Church here altogether.

So it is that now, in the third millennium — Act Three — the Church here looks as doomed as Tom Cruise does when there are 20 minutes left in a Mission: Impossible movie.

In Hollywood, this would be when salvation arrives. Now is the time for Luke to trust the Force, Cinderella to meet her Fairy Godmother, and Katniss Everdeen to get the medicine and win the crowd.

And, right on cue, the Church has discovered what she had all along but never used to the full: The laity.

It started in a trickle with Frank Duff and Michael McGivney and Dorothy Day, and flowered in Vatican II’s Universal Call to Holiness. It continued after the council with Solidarity, Josemaría Escrivá, World Youth Days, Catholic identity colleges, and Scott Hahn and the Catholic apologetics revival.

The laity was alive and focused as the new Millennium began. If this were a movie, the moment would be exhilarating. We would think “This’ll be great. Watch the laity get out of this one!”

But this is real life, so we might not feel so exhilarated. In real life, we fear, when Catholic people give up and forget who they are, they get owned by the secular culture and then they’re done.

But we need to remember where we get this expectation of victory when all is bleak.  It comes from God.

God is the king of Act Three. He loves to wait until all earthly hope is gone, and then win.

The Israelites in Egypt weren’t just enslaved by the Egyptians: they were utterly defeated. They had forgotten their identity, their calling, and their God. Then God sent Moses.

The first Christians didn’t just abandon Christ at the crucifixion — they abandoned the Christian project, walking away disillusioned from apparent failure. Then Christ rose.

Following the type of the martyr, the Church has snatched every one of its major victories from the jaws of defeat. Our creed emerged from Christological heresies, our schools were born in the “Dark Ages,” Our Lady of Guadalupe showed up in the ruins of the post-Reformation Church.

There is no doubt the same thing can happen today. If we make the right choice.

We can, of course, make the wrong choice. We Christian laypeople in the West can give in to exhaustion, demoralized by declining numbers and horrific scandals, and hand over the gains our forbears won.

God can handle that too. He is already raising up faithful sons and daughters in Africa, India, China and South America. The Church will do just fine without us.

But we can make another choice. We can take seriously that this is our hour.

I predict not only that we will make the second choice, but that we have already begun to.

This moment doesn’t just come after years of decline. It also comes after years of a renewed laity — laity that graduated from “mandatum schools” like Benedictine College, a laity who grew up in exciting youth apostolates, a laity that goes to Eucharistic adoration, prays the rosary and queues up for frequent confession.

A protest movement bigger than the Civil Rights movement has been going strong for years, right under the noses of a world that refuses to acknowledge it: Life chains across the country each October, and hundreds of Marches for Life stretching across the country between the two enormous ones in Washington, D.C., and San Francisco.

Our numbers are large, our faith is strong and we follow Jesus Christ himself.

This is no moment to retreat. Too many people have worked too hard to leave us with exactly the resources we need to rise to the challenge. As John Paul said in Denver:

“Do not be afraid to go out on the streets and into public places, like the first Apostles who preached Christ and the Good News of salvation in the squares of cities, towns and villages. This is no time to be ashamed of the Gospel. It is the time to preach it from the rooftops.”

A version of this appeared at Aleteia.
Photo: Flickr, Madrid11