The Power of the Memorare Prayer 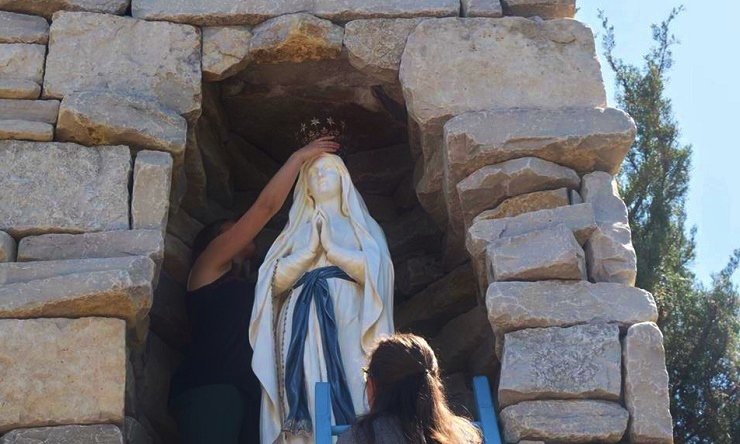 The Memorare Prayer
“Remember, O most gracious Virgin Mary, that never was it known that anyone who fled to thy protection, implored thy help, or sought thy intercession, was left unaided. Inspired by this confidence I fly unto thee, O Virgin of virgins, my Mother. To thee do I come, before thee I stand, sinful and sorrowful. O Mother of the Word Incarnate, despise not my petitions, but in thy mercy hear and answer me. Amen.”

The prayer that St. Teresa of Calcutta called “the most beautiful prayer” is making an impact worldwide — but in  a special way on Benedictine College’s campus, reports the National Catholic Register.

The story, “Committed to Memorare: Prayer Packs Grace-Filled Power” by Joseph Pronechen, staff writer for the Register, has been shared nearly 3,000 times online.

In it, Missionaries of Charity Father Brian Kolodiejchuk, the former postulator for Mother Teresa’s sainthood cause, describes St. Teresa of Kolkata’s love for the Memorare.

He describes how, in 1984, a drenching rain was pouring in Rome when St. John Paul II planned to celebrate Mass outside. Mother Teresa organized her sisters to pray a “flying novena” of nine Memorares. The rain stopped. Archbishop Joseph Naumann once described how the same thing happened at Benedictine College.

The article goes on to describe the Memorare Army prayer campaigns that Benedictine College President Steve Minnis has organized, starting in 2006. A team of 25 friends of the college prayed 1,200 Memorares apiece for an increase in enrollment.

“[W]e got 1,232 students, almost 200 more than predicted during the summer,” President Minnis is quoted saying. “Mary had really helped us with that.”

In 2008, Minnis formed a Memorare Army to pray for the means to build a Marian Grotto in the heart of campus.

The Register reports: “Joining this army were the likes of Coach Lou Holtz and speaker Immaculée Ilibagiza. Ground was broken for the grotto in 2008, the 150th anniversary of the Marian apparitions at Lourdes and of the college’s founding. The grotto was dedicated in 2009.”

This week, the Grotto was the site of the May Crowning — an annual event featuring students who are entering religious life, and which this year featured two sisters who are students.

“Mary has continued to grace us with her love and her support,” President Minnis tells the Register.

Pronechen also mentions one of the other schools that has imitated Benedictine College’s Memorare Army prayer campaigns.

Last, Pronechen reports on families who pray the Memorare by speaking to Joe and Megan Wurtz. Joe serves as Dean of Students for Benedictine College, where he is an alumnus.

“At the conclusion of their family Rosary, they always pray the Memorare with their five children, who range in age from 3 to 14,” writes Pronechen.

Additionally, “For our marriage, it’s become our central Marian prayer outside the Rosary,” Wurtz is quoted saying. “The Memorare is the one we pray most often.”