This Divine Mercy Sunday, Lessons From the New Paul Movie 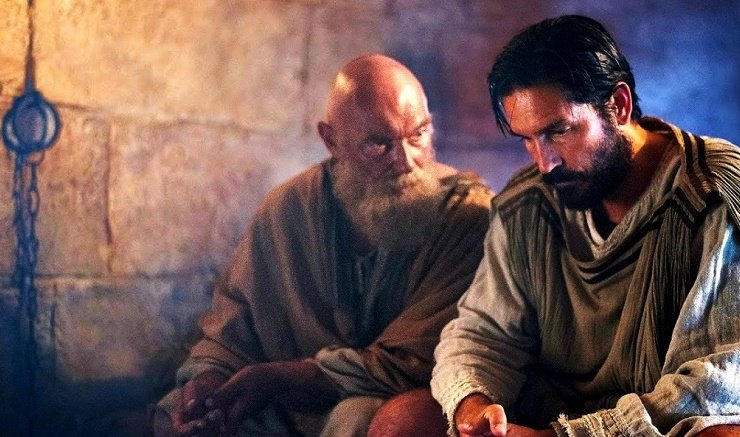 The movie Paul, Apostle of Christ can give some needed perspective on Divine Mercy Sunday.

It is easy to think of Divine Mercy as no big deal at all. We never doubt God’s mercy. We take it as a given — and we assume it would take us doing something really extraordinarily wicked to lose that mercy. The movie reminds us that it is not as easy as that.

In the movie, a Roman challenges Paul and Luke about the truth of the resurrection.

“If Christ had not risen from the dead, then our preaching is useless, and so is our faith,” answers Paul.

“So you have no doubts at all?” responds the Roman.

With a great look of toughness forged in terrible suffering, Paul answers him, “Men do not die for things they doubt.”

He is right. The entire Christian religion is built on the certainty of the Resurrection — and the witness of the early Christians is a key to that. These Christians did not doubt. Neither should we.

The Church celebrates Easter Sunday for eight days in a row — culminating on a day that has only recently been called the Feast of Divine Mercy. This is a great reminder that without the Resurrection, there is no hope for mercy.

A central tension in the movie is between Paul and a prominent Roman opponent who gets upset at Paul when he can’t promise him a miracle.

“You have certain powers, but claim to have no authority of your own,” he said. “You sound more like a slave than a leader.”

“All men are a slave to something,” Paul answers. “The question is — what?”

This is the key question of Divine Mercy Sunday, when God grants the Apostles the power to forgive sins in the Sacrament of Reconciliation: “He breathed on them and said to them, ‘Receive the Holy Spirit. Whose sins you forgive are forgiven them, and whose sins you retain are retained.’”

This is the great gift the Passion paid for — this gift of forgiveness that sets us free from slavery to sin.

But notice what Jesus says: Some sins will be forgiven; some will be retained. There are many ways to retain our sins — making them habits, not trying to end them, never confessing them. But there is only one way to see them forgiven — confession, with a firm purpose of amendment to change our lives.

Divine Mercy sets us free — but only if we step out of our cage.

Third: Divine Mercy entails our own works of mercy.

But in addition to following God’s commandments in our own life, the movie makes it clear love requires more. We have to touch others.

“They will know us by our love,” St. Paul says in the movie, and the film contrasts Luke’s healing work for others, even enemies, with the anti-witness of Cassius, a rebel.

The Christians in the movie, in fact, engage in all of the works of mercy described in the Catechism:

“Instructing, advising, consoling, comforting are spiritual works of mercy, as are forgiving and bearing wrongs patiently. The corporal works of mercy consist especially in feeding the hungry, sheltering the homeless, clothing the naked, visiting the sick and imprisoned, and burying the dead … [and] giving alms to the poor” (CCC 2447).

The life of a Christian in our day is no different.

The movie shows a compelling picture of the way early Christians lived, much like the first reading for Divine Mercy Sunday, from Acts Chapther4: “The community of believers was of one heart and mind … There was no needy person among them …  [goods] were distributed to each according to need.”

But there is a shadow on the bright and beautiful early Christian life.

In the movie, the shadow turns up in Cassius, who get tired of the persecution and fights back.

In the Bible, the shadow turns up in Ananias and Sapphira, who in the next verses of Acts, hold back from the group to keep more for themselves, and get no mercy at all from God.

Which are we more like? The radical Christians who consider their own goods the property of those who need them more — or those who hold back?

“Love is the only way,” is a key piece of advice that the movie repeats.

This is exactly what St. John describes in today’s second reading: “In this way we know that we love the children of God: when we love God and obey his commandments.”

Love means doing as Christ commands — even when things get very, very tough.