This Sunday is Corpus Christi Sunday, the Solemnity of the Body and Blood of Christ, a day celebrated Thursday in much of the world.

The day is meant to spotlight the Real Presence of Jesus Christ in the Eucharist, and it is celebrated by processions and adoration to make it clear what — or Who — Catholics believe that host really is.

But there are also some mainstream films that speak the same truth. Here are some Eucharistic movie moments and what they say.

Even more than the actual suffering of Jesus, I think, what Mel Gibson’s masterpiece best shows is the connection between the Eucharist and the Crucifixion.

As Corpus Christi’s readings and Gospel make clear, the Eucharist transforms the Old Testament Passover meal — while continuing it throughout time.

The movie shows this by intercutting between the Passion and the Institution of the Eucharist, making it clear that Jesus wanted us to have contact with the first through the instrument of the second.

As the Catechism puts it, the Passion of Christ “transcends all times while being made present in them all” at Mass, adding that at Mass, “Christ’s sacrifice present on the altar makes it possible for all generations of Christians to be united with his offering.”

As I have mentioned before, I unexpectedly loved the movie Silence.

One of the most moving moments in the film happens when hidden Christians in 17th-century Japan get to receive the Eucharist after being denied it through persecution.

This underscores that “only validly ordained priests can preside at the Eucharist and consecrate the bread and the wine so that they become the Body and Blood of the Lord.”

This is why we need priests. Without them, we would be as hungry as Japan’s secret Christians. 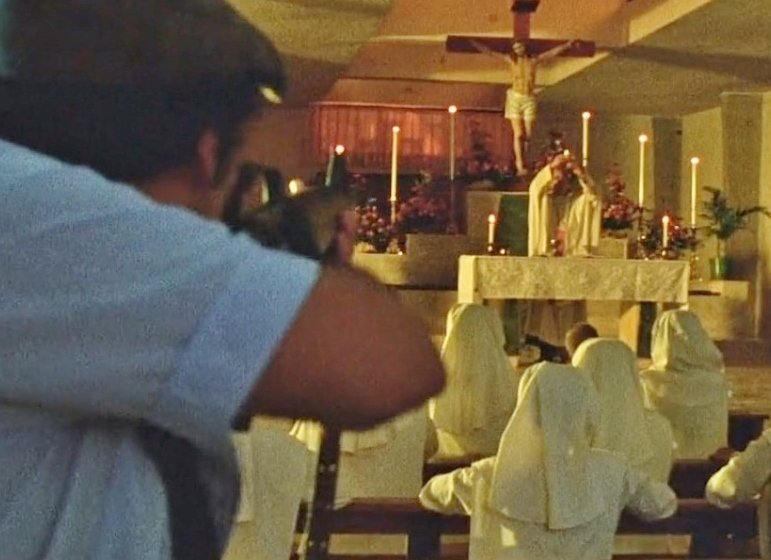 The end of this biopic is moving because the end of Blessed Oscar Romero’s life was moving. It shouldn’t be a spoiler to say that the San Salvador Archbishop was martyred at Mass.

Truly, “growth in Christian life needs the nourishment of Eucharistic Communion, the bread for our pilgrimage until the moment of death.”

Not many of us will be martyred at Mass. But communion should prepare each of us for our death — whether by violence or not.

This movie about Algerian monks killed by Islamist aggressors shows how the Eucharist prepares us for our death. The film reinforces the message with a scene at Mass in which we hear the repeated words “The body of Christ … the body of Christ” — and a later “last supper” scene that shows what the body of Christ looks like.

After all, “by the Eucharistic celebration we already unite ourselves with the heavenly liturgy and anticipate eternal life, when God will be all in all.”

A highlight of this film for Catholics is when St. Paul (James Faulkner) gives St. Luke (Jim Caviezel) communion.

It is a good reminder that “The liturgy of the Eucharist unfolds according to a fundamental structure which has been preserved throughout the centuries down to our own day.” It is a structure described by both Pauland Luke in several places. 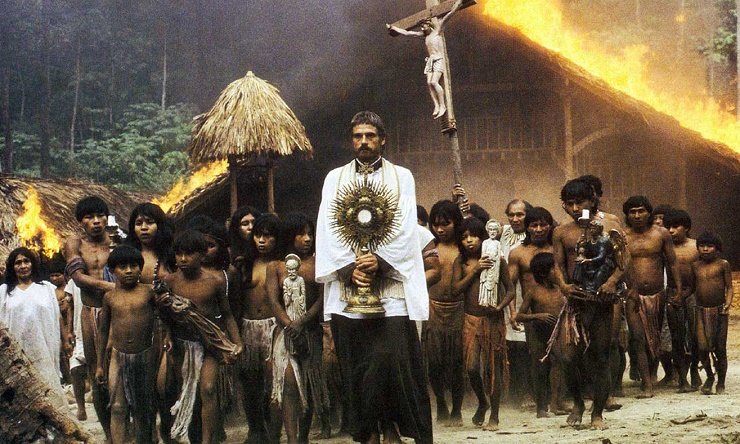 There are two famous scenes from this movie: Indians tie a missionary to a cross and send him over a waterfall in the movie’s opening, and a missionary leads Indians in procession behind a monstrance as their village burns at the end.

The two images tell you everything you need to know. The Indians who rejected the Church have now become the Church; even ecclesial politics couldn’t stop them.

In the World War II sequences that frame this classic 20th-century British story, Charles Ryder (Jeremy Irons) finds himself in the home where he discovered the Catholic faith. There he discovers the sanctuary lamp by the tabernacle still lit and rekindles hope.

The presence of Jesus in the Eucharist does not just last through Mass; it lasts as long as the bread does; and the Church protects that presence in the tabernacle.

In this film from the director of The Mission, a young St. Josemaria Escriva protects the Eucharist from desecration by communist thugs.

The need to deliver the sacrament to those unable to attend Mass first led to the Eucharist existing apart from the Mass, and this led to Eucharistic adoration.

My family loves this 1962 war film, made with lively fidelity to the facts of D-Day as they were known then, but without gore.

One of my favorite parts of the film is a rather minor one. A priest is desperate to get his Mass kit back after it sinks, and dives again and again into a pond.

It is done for comic relief, but nonetheless it expresses the supreme importance of the Eucharist in the lives of Catholics.

A centerpiece of this movie is an outdoor Mass on the evening of battle. It underlines the theme of this story of the Cristero revolution in Mexico: True glory is found in sacrifice, not violence.

After all, says the Church: “Christ gives us in the Eucharist the pledge of glory with him.”