This Sunday, Christianity Gets Strange 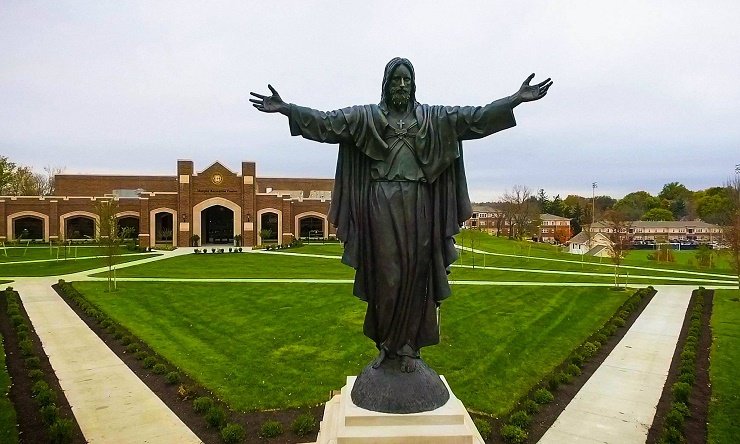 In the readings for Ascension Sunday, Year B (or Ascension Thursday in some dioceses), Jesus tells the Apostles about wild signs that will accompany believers, and then he rises up into the clouds and disappears.

It might seem a bit much. But if you think through the claims being made, they do make sense.

First, about those signs … they are literally true.

“These signs will accompany those who believe: In my name they will drive out demons,” Jesus tells the apostles. “They will speak new languages. They will pick up serpents with their hands, and if they drink any deadly thing, it will not harm them. They will lay hands on the sick, and they will recover” (Mark 16:17).

Imagine Jesus had said instead “These signs will accompany those who are Americans: They will map the human genome. They will walk on the moon. They will wrestle alligators, and they will cure deadly plagues.”

That wouldn’t bother us. We know that Americans have done all these things. We wouldn’t expect that every or even most Americans would do each of them.

After all, at the beginning of  today’s Gospel, Jesus says, “Go into the whole world and proclaim the gospel to every creature” — but no one expects every Christian to literally travel the entire world preaching, telling every single person about Jesus.

As it happens Jesus’s followers, as a group, have in fact gone out into the whole world. They have driven out demons (at every parish, actually); spoken new languages; I personally know of several sick people who were healed; St. Paul was unharmed by a serpent; and the Christian community includes poison survivors, too.

But the signs are also spiritually true.

As St. Gregory the Great put it, “Holy Church does every day in spirit what then the apostles did in body.”

When we speak the mysteries of God, we speak a “new language,” he said. When we warn people away from evil we “take up serpents;” when we resist “words of pestilent persuasion” we survive poison. And every time we successfully encourage a neighbor to holiness, we have healed a sick person.

“These miracles are greater,” he said, “as they are spiritual, and by them souls and not bodies are raised.”

So in both senses — the literal and the spiritual — this Gospel has been fulfilled as Christ said.

But what about Jesus ascending into heaven?

If it seems odd or uncharacteristic for Jesus that “as they were looking on, he was lifted up, and a cloud took him from their sight,” it’s important to remember a few things.

Jesus had to walk a fine line. He was both man and God, but that reality was too mind-blowing for people to grasp. Besides, to gather followers to himself as God would be blasphemy punishable by death.

So, throughout his whole life on earth, he had to demonstrate he was God while preaching his message very carefully. This is why he did a few things like multiplying loaves, walking on water and raising the dead, while saying a lot of things that only God could say — about the kingdom of God, the meaning of love, and the purpose of life.

But when it came time for him to depart, he no longer had to walk a fine line. Now he had to show plainly who he was and what he had come for — to form a group of people who would proclaim his name to every end of the earth.

People often ask, in frustration, “If Jesus was really God, why didn’t he just speak plainly about it and show who he was?”

Well, he does just that in the Ascension. In Matthew 28:18 he tells the apostles that all authority in heaven and earth had been given to him. Then he ascends, showing it to be true.

Ultimately, the message of the readings is that Yes, Christianity is strange. Or, better, mysterious.

We profess it every week at Mass: “He ascended into heaven and is seated at the right hand of the Father.”

Our whole faith is predicated on belief that Almighty God came down from heaven to gather us up and bring us back there with him.

How? “You will receive power when the Holy Spirit comes upon you,” he said. Stay tuned for next week …