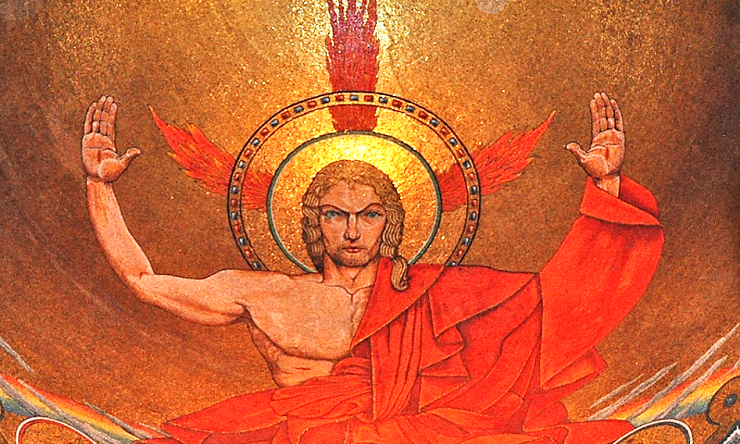 No, the “Old Testament God” is not always harsher and angrier than the “New Testament God.” This Sunday’s readings prove it.

Along the way, the readings for the First Sunday of Advent Year C also remind us that both sides of God are important: He is both more strict than we expect and more merciful.

Jesus Christ in the Gospel is far from the pushover we too often expect him to be.

As Advent begins, the Church’s readings ask us to prepare for Christmas in a serious, radical way — in many ways by doing exactly the opposite of what the world is doing.

Jesus says: “Do not become drowsy from carousing and drunkenness” — at exactly the time of year known for boozy office Christmas parties and spiked eggnog.

Jesus warns not to get caught up in “the anxieties of daily life” — exactly when we spend days anxiously caught up in Christmas preparations.

Jesus warns that the day of his coming will “assault everyone who lives on the face of the earth” — exactly when we are most sentimental about how sweet and gentle his coming will be.

We think of Jesus’s Christmas coming as a time of tinsel and twinkles, mistletoe and “ho ho ho.” Jesus doesn’t see his Second Coming that way at all:

On earth, nations will be in dismay, perplexed by the roaring of the sea. … People will die of fright. … Pray that you have the strength to escape the tribulations that are imminent and to stand before the Son of Man.

“The days are coming, says the Lord, when I will fulfill the promise I made,” says the first reading, from Jeremiah.

Will that mean thunder and fire and lamentation? No: “I will raise up for David a just shoot; he shall do what is right and just in the land.”

The grand fulfillment of God’s mighty promises, he says, will be — a shoot; a tiny little plant: bunny food.

If that seems anticlimactic, it shouldn’t. It is the same high drama God gives us each spring when, after a long winter, we know how exciting a shoot can be.

But that’s the point: Instead of the fiery ending of all we know, Jesus’s coming is a thrilling beginning to all we hope for.

The reading continues in the same reassuring tone: “In those days Judah shall be safe and Jerusalem shall dwell secure”

The Psalm continues in the same vein, telling us God doesn’t smite us, but “shows sinners the way,” and “guides the humble to justice.”

Will we be “assaulted” by the day of his coming? Not necessarily, says the Psalm:

“All the paths of the Lord are kindness and constancy toward those who keep his covenant and his decrees.”

That thing about “keeping his decrees” is important. St. Paul explains.

He wants us to imitate the love of God in order to escape the wrath of God.

“Abound in love for one another and for all,” Paul says, “to be blameless in holiness before our God and Father at the coming of our Lord Jesus with all his holy ones.”

This is the key that unlocks the reading: God is love, and he will recognize those who love like he does.

“You should conduct yourselves to please God,” Paul says. If you do, his coming will be jubilation.

But those who don’t live his love — those who can be blamed for lack of holiness — they have much to fear from his return, because selfishness is the opposite of love.

This is the whole point of Advent.

The three practices of Advent — prayer, fasting and almsgiving — are the Church’s way of preparing us to “stand before the Son of Man.”

We pray so that, like the Psalm, we can learn to love his ways.

We fast in order to detach ourselves from the world that is passing.

We give alms in order to “abound in love for all.”

The Church wishes you a radical Advent, an Advent that is spent preparing for the coming of Christ — so that we will greet him as a loving ally.