This Sunday, Jesus Shows How Much He Hates Death 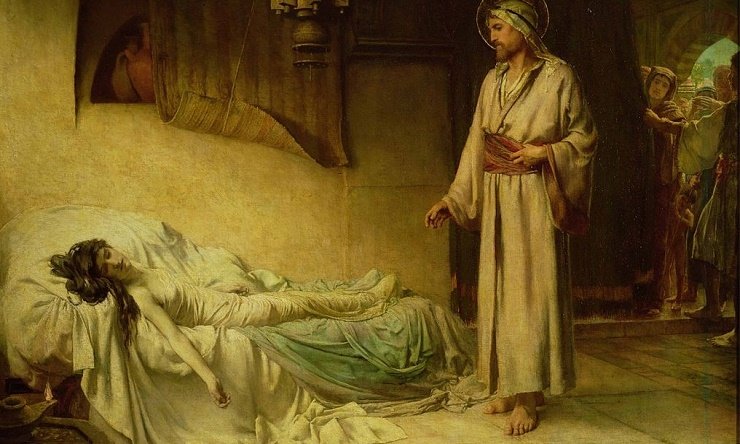 It’s easy to get the wrong idea about God and suffering. This Sunday, the 13th Sunday in Ordinary Time, serves to correct our mistaken impression.

We look at the command to “Take up your cross each day and follow me,” and we think God likes it when we suffer. We look at the crucifix and think that God embraced death in general, and not just his own.

He doesn’t and he didn’t.

Jesus showed the family of a dead little girl what he thought of suffering and death.

In Sunday’s Gospel, a synagogue official named Jairus falls at the feet of Jesus and begs for his dying daughter’s life.

Jesus could cure his daughter with a word, but instead he walks to his house, and the Gospel shares lots of details – a crowd presses on him, he comes to a house surrounded by scoffers, and he takes the girl’s parents and a select few inside.

The mother and father must have rejoiced — but not as much as God did.

Sunday’s first reading is a remarkable summing up of what God thinks of death.

“God did not make death, nor does he rejoice in the destruction of the living,” the book of Wisdom says. “For God formed man to be imperishable; in the image of his own nature he made him.”

He made us all to live forever, and hates it when any of us dies.

Death is unwelcome on earth. God didn’t intend it.

Also like any good parent, God knows the importance of giving his children freedom — real love requires choice — but he is sad, like us, when his children choose to drift away from him.

It is through this freedom that “by the envy of the devil, death entered the world, and they who belong to his company experience it.”

When Adam and Eve believed the devil’s lie and decided to follow his advice rather than God’s commandment, they became part of his company and conformed to his image instead of God’s. They chose the way of death — physical death and spiritual death.

Jesus wept twice in the Gospels — once at the physical death of his friend Lazarus, and once at the spiritual death of Jerusalem, which had not recognized its savior.

When we sin we make the same choice as Adam and Eve, with the same consequence — and the same sadness on God’s part.

Jesus didn’t embrace suffering and death because he liked it. He embraced it because he loves us.

Which brings us back to the cross. Jesus came to die not because he wanted to, but because it was the only way to defeat death. Like a parent shielding a child in a burning house, he knew that the only way to protect us from death was to die in our place.

Parents do that in much less dramatic ways all the time, making sacrifices of all kinds for their children. So did God. Jesus, “though he was rich,” writes St. Paul in today’s second reading, “for your sake he became poor, so that by poverty you might become rich.”

We are all Jairus’s daughter — and we are all the woman with a hemorrhage.

So each of us is like Jairus’s daughter, waiting for life from its only source. Or perhaps we are like the woman he meets on the way to Jairus’ house.

Mark tells us that for 12 years she has “suffered greatly at the hands of many doctors and had spent all that she had. Yet she was not helped but only grew worse.”

This is each of us, suffering and seeking healing in all the wrong places, in the ideologies and pleasures and promises that the world makes.

Finally, like her, we reach out to Jesus, in desperation.

We each need to have that moment with Jesus, realizing at last that he did not make us to be wounded and hurting and desperate. He made us to live. And none of us — even the spiritually dead — are beyond his healing touch.