This Sunday, We Meet the Jesus They Met 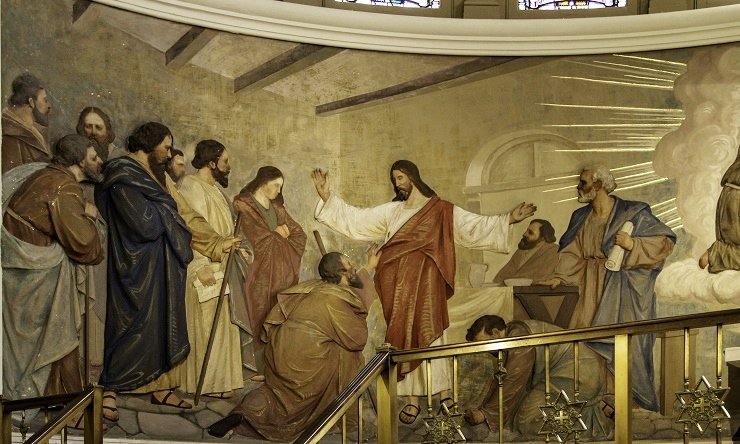 This Sunday, the Third Sunday of Easter (Year B), we see an early point in the transformation of the apostles. From the Passion to Pentecost they went from cowardly to courageous, from traitors to martyrs, from silent in the upper room to shouting from the rooftops.

What did this to them? Well, the Holy Spirit certainly; but also the resurrection. Once they saw what they saw, there was no other option but to share it. What did they see?

They met a God who pursues them.

The Gospel opens up with two disciples returning to Jerusalem. Luke reported that these disciples had headed out of town after Jesus was killed. But then they met Jesus on the road and in the Eucharist, and they were compelled to come back.

“While they were still speaking about this, he stood in their midst and said to them, ‘Peace be with you.’”

This is not a God who is distant and aloof; he pursues us when we flee, and he stands beside us when we return.

They met a God who can give them their real lives back.

Sometimes we forget what the resurrection really meant for Jesus and what it really means for us. Sure, he is no longer dead, but we think of him in a spiritual, ghostlike, in-between state.

But Jesus in today’s Gospel gives all the disciples the same opportunity he gave Thomas in the last reading: “Touch me and see, because a ghost does not have flesh and bones as you can see I have.”

In fact, “They gave him a piece of baked fish; he took it and ate it in front of them.”

St. Thomas Aquinas assures us that after our own resurrection will be no less real, and extraordinary in the same ways — we will be able to eat, touch and be touched, but also be able to go wherever our soul would take us, free of pain.

Seeing this reality in person changed hundreds of early Christians from doubters to preachers.

They met a God who helps them see everything as it is.

In today’s Gospel, Jesus tells his disciples, “Thus it is written that the Christ would suffer and rise from the dead on the third day.” But he had told them that before. This time, he does something more: “He opened their minds to understand the Scriptures.”

We all know what it’s like to finally understand something that didn’t make sense before — anything from a math problem to the plot of a movie. It is a beautiful, pure, satisfying feeling.

The disciples had this feeling to an even higher degree, and it wasn’t just one small thing they were finally understanding, it was everything – the whole human story.

They met God himself and were compelled to do something about it.

Penn Jillette of the magician duo Penn and Teller is an atheist, but he has said that he totally understands evangelization.

This is how those who met the risen Jesus felt. Jesus himself told them “that repentance, for the forgiveness of sins, would be preached in his name.” They made sure that happened.

We meet him too. We experience practically everything they did.

The first two readings show that we are in the same position the early Christians were.

“The author of life you put to death,” says St. Peter, and accuses his audience of doing exactly what he himself did: denying Jesus when it mattered most.

St. John applies the same lesson to those who followed later. “Those who say, ‘I know him,’ but do not keep his commandments are liars,” he says.

But John also extends the same opportunity Peter had: “But if anyone does sin, we have an Advocate with the Father, Jesus Christ the righteous one. He is expiation for our sins.”

We too need to repent. We, too, can meet Jesus the way the apostles did: In the Eucharist, in the Scriptures and in the Church.

It would be stupid not to accept him and wrong not to share the news.