What I Learned Last Time 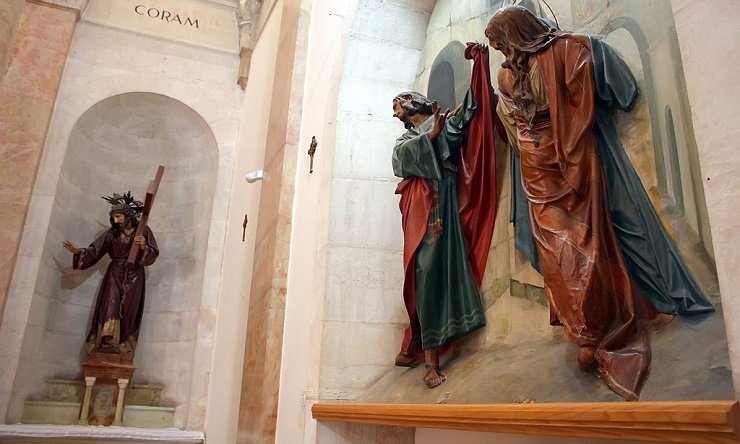 A little more than a decade ago, I unexpectedly started crying in my black Honda Civic in the fast lane of I-91 near Meriden, Connecticut.

I was driving south from Bradley International Airport to New Haven. I had cried maybe one other time in my adult life. My sobs shook my body and made it hard to concentrate on the road. They were also the beginning of a season of great doubt in my life, doubts that would force me to reconstruct why I believed what I believed as a Catholic.

I was returning from a flight to Arizona to visit my mother. She had been diagnosed with Lou Gehrig’s disease on February 9 — Ash Wednesday. As priests were saying “From dust you came and to dust you will return,” her doctor was telling her the same thing, less poetically.

But for months before that the family had known something was wrong. Over the summer her voice had started slurring and my dad started fielding private phone calls from worried friends — and her three children — who wondered if she had become a secret drinker.

By Thanksgiving she could hardly speak at all. Nobody knew what was wrong. Everybody knew it was something huge.

When I visited her after her diagnosis, I came face to face with the greatest suffering I had ever seen so close-up. Each time she choked when she attempted to eat, each time she dripped saliva from her mouth and gurgled helplessly, each time she tapped out a message on the machine that spoke for her in a strange metallic voice, my world shriveled a little.

I had read all about the problem of suffering, but it hadn’t prepared me for this. I had even read those writers who point out that reading about suffering doesn’t prepare you for suffering. They hadn’t prepared me either. The proximity to actual suffering triggered a deep revulsion in me: I couldn’t understand why my all-powerful God was sitting idly by as my mother lost control of her muscle groups one by one.

But my mother’s slow-motion descent to the grave was not the only faith crisis I faced.

I faced the crisis every Catholic was facing, but which my chosen subgroup of Catholics faced in a particularly nasty way in the person of Father Marcial Maciel, founder of the Legionaries of Christ, a religious order that ran a lay group. When the Vatican revealed the truth about the founder, it said he was guilty of “actual crimes” and lived “a life devoid of scruples and of genuine religious sentiment.”

What he had done was molest seminarians, marry on the side, and lead a double life of the deepest sexual depravity.

And so it was that I found myself facing two brutal facts. God’s Church sometimes ordains people who turn out to be monsters, and they sometimes turn out to be in charge of people like me. And God sometimes watches as those he loves suffer agonizing, living deaths.

The two truths stood in front of me like giants blotting out the sun: God was watching my mom get beat up, and was doing nothing. And my heartfelt “vocation” in God’s Church had been designed by a perverted con-man.

A priest’s words from college kept me wrestling with my doubts instead of turning away entirely.

“You are full of faith now,” Fr. Arthur Swain had told a group of us, brim-full of piety, at daily Mass. “You are young and idealistic. But you won’t be forever. Believe me, years from now, when you see what life has in store for you, your faith will stumble. When that happens, you need to remember that you are a baptized, confirmed Catholic. God has promised to give you what you need to keep your faith, and to be holy. Don’t let that promise be broken. Insist on faith. If you lose your faith, get angry about it. He promised you faith. Don’t let him off the hook.”

But now that it was happening, now that my faith was dissolving, I did what he said: I prayed angrily, insistently, and then desperately. “How dare you! How dare you allow my mother to be squished like a bug! How dare you allow your holy catholic apostolic Church be baited like a trap by a monster! Who are you, anyway?”

I didn’t do this once, I did it for an hour every day. I literally spent an hour each day at lunchtime in front of the tabernacle, asking the question again and again. I’d pray a Rosary until the question interrupted; pray the Stations of the Cross until I came to myself in front of the Tenth Station, realizing I had been lost in anger for 15 minutes and my hour was up.

I felt like I was drowning in currents and cross-currents of lies; I needed to reach out my feet and touch bottom. Finally I focused the issue as Father Swain had asked. I started to examine those things in my faith life that came with a 100 percent guarantee, the sacraments.

I started with Baptism. I looked up the baptismal promises, read what the Church teaches about them, and asked theologians and priests and sisters and good guys from church about them. Hard questions. Incessantly.

Baptism gives you faith, hope, and love — and the gifts of the Holy Spirit, all the tools necessary for happiness. That’s guaranteed. It isn’t automatic, like a motorboat, but it’s guaranteed — an unfailing wind for your sail. I remembered the fire in Father Swain’s eyes when he insisted that we demand these things, so I demanded them.

I highly recommend that anyone troubled in their faith do the same thing: Demand faith, love, wisdom, understanding, all of it. Insist on it, honestly, angrily, repeatedly. Never let Him off the hook.

He will do what he promised. He has to.