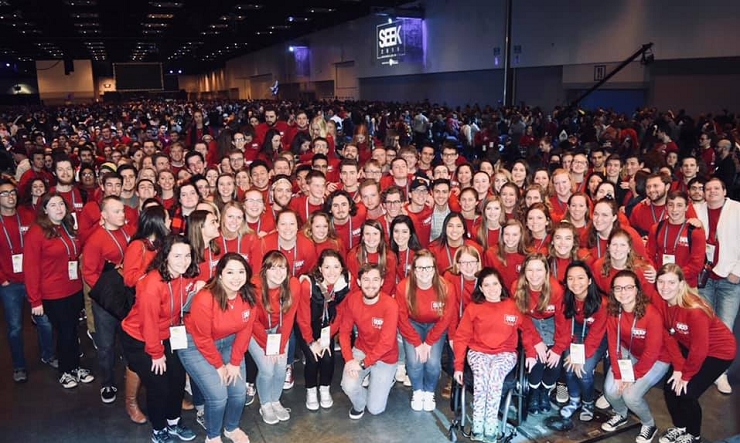 At the closing Mass Sunday, Denver Archbishop Samuel J. Aquila called the conference “a great sign of hope for the church, that the church is alive and well among young people.”

When the conference started on Thursday, Curtis Martin, the founder of Focus, told the crowd that the annual winter event started with just 20 students from Benedictine College attending. Now it draws students from across the country, and this year from Austria, Ireland and Germany.

Why has it grown so big? “Eternal life is all that matters,” Martin explained. “This is why you’re here — nothing else matters”:

“There’s two types of people in this world: There’s thermometers, and there’s thermostats,” he added. “When you walk into a room, does the room impact you, or do you impact the room?”

Focus, founded in 1998 at Benedictine College , helps Catholic college students grow in their faith and reach others. The organization has grown to nearly 700 missionaries serving on 153 college campuses in 42 states and five international locations.

The event still has a strong Benedictine College presence. The college was very visible as a sponsor of the event — and also visible in the crowd, with nearly 400 Raven students attending, including six busloads that set out from the college.

Lisa Cotter, who graduated from Benedictine College in 2007 described herself as a “SEEK addict” and said she had been attending for years.

“My first conference experience began with my joining a FOCUS Bible study during my freshman year in college,” she said of her first SEEK 15 years ago. “With my new college friends crammed into my two-door sports car and a freshly burned mix CD in our player, we drove 2.5 hours north of Benedictine College for the conference in January — and I entered into what I believed to be Catholic utopia.”

She said a major benefit of the conference was in showing Catholic students others who shared their faith across the country.

“I thought all of the good Catholic college students attended my school!” she said. “I was impressed. This was huge. We weren’t alone in Atchison. “

She said she never gets tired of the conference because “each conference is different.”

“My personal experience has proven that each conference raises the bar for the next, always living up to my high expectations,” she said.

Author and speaker Sarah Swafford, a 2004 Benedictine graduate, was one of the conference’s featured speakers. She said this year’s SEEK had its own special character.

“This week was so on fire. It was beautiful! It was an anointed SEEK,” she said. The conference gave her great hope, she said, reminding her that “there is so much good stuff out there. I’m in awe of everything the Lord did.”