25 Years Ago, He Sensed God’s Plans for Benedictine 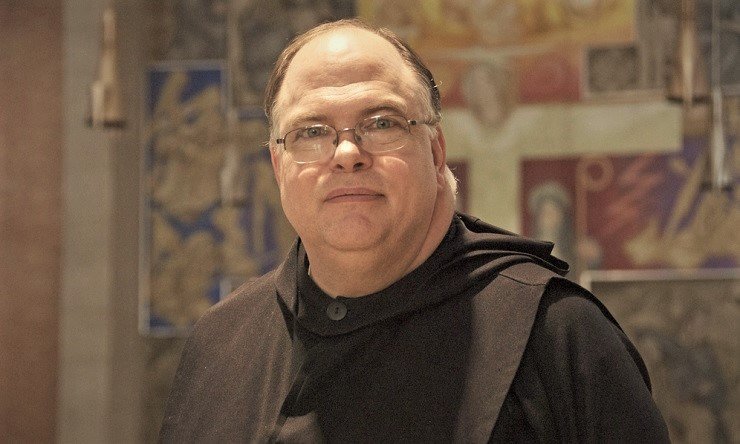 The renaissance of the faith on Benedictine College’s campus started, in part, at a Vacation Bible School summer camp at Leoti, Kansas, a decade earlier. It only took Eucharistic adoration to really make it work.

That camp is where Stanley Miller first started to take his faith seriously as a young boy. He would later become Benedictine Father Meinrad  Miller and help remind Benedictine College in Atchison, Kansas, to take its faith seriously, starting Eucharistic adoration and then much more.

On the 25th anniversary of his ordination to the priesthood, Father Meinrad was interviewed in St. Benedict’s Abbey’s podcast and traced not just his vocation story, but the story of the renewal of faith at Benedictine College.

At that summer camp long ago, he had a realization.

“For the first time, I really sensed that the Bible was real, that these stories are real, that this person Jesus was real,” Father Meinrad said.

He met the Benedictine order later when, in fifth grade, his family owned a doughnut shop in Shelton, Washington. In high school, he spent a week at St. Martin’s Abbey, about 40 minutes away.

Miller was impressed with the way monks “lived like the early Acts of the Apostles, living in community and in love,” he said.

He visited several other monasteries but eventually his vocal talent brought him to Benedictine College in 1984, where he enrolled as a Freshman studying voice and organ.

Stanley Miller was active in social service on campus and was part of the group that started the Hunger Coalition, now a mainstay of service at the college. He was one of the first students to ever deliver sack lunches to the needy of Atchison. Miller was also a member of the Chamber Singers and Knights of Columbus.

It was a talk in his Sophomore year by Father Dennis Meade that was the impetus for him to join the Abbey and finish school with studies he needed toward seminary.

Father Meinrad graduated in 1989 with a degree in Religious Studies and a minor in Music. He went on to earn his Masters of Divinity at St. Vincent’s Seminary and joined the ranks of St. Benedict’s Abbey.

The new priest sensed God had a plan.

“I remember being ordained 25 years ago and thinking the Lord had something great in mind for Benedictine College and the Abbey,” he said.

His role in the college was significant.

First, he was Abbey Vocations Director, and helped bring new life into the Abbey. “I’m happy that a number of those early vocations are still here,” he said.

When he was assigned duties at the college in 1994, he put plans in motion.

“At the college, from the very beginning, I began to have Holy Hour once a week,” he said. “I dusted off the monstrance. Then it all kept expanding. I began to increase the number of times for confessions.”

To expose students to the larger faith experience, he said, “We began bringing in great speakers, Father Benedict Groeschel and others.”

He didn’t have instant success, however.

“I must admit that oftentimes in the early days it was walking by faith, because I didn’t know what the fruit of all this would be. You don’t know what’s going to happen but you just trust that the Lord is with you and that the Risen Lord is what is at the heart of what is happening.”

In the Spring of 1997, he was watching EWTN with the school’s Knights of Columbus student group when Curtis Martin and Scott Hahn appeared on Mother Angelica’s show.

The two discussed their idea of the Fellowship for Catholic University Students. “I told people in the room that we needed that group on campus,” he said.

He reached out to Martin and Hahn but heard nothing back. But then, “that fall we had this new young professor here by the name of Ted Sri. I asked him about this FOCUS program, and he kind of lit up and became excited.”

They worked that fall and soon had Curtis Martin come to campus, where he spoke to 200 students in the school’s auditorium. A group of student leaders went to a retreat house to plan the launch of FOCUS.

“It was a fruitful weekend,” said Father Meinrad, who is quick to add, “My role was mainly praying.”

Father Meinrad served Benedictine College as Chaplain from 1994 until 2010 and still teaches in the Theology Department.

“I’ve seen a great growth in the faith life of the students. Even if they are not theology majors — if they’re engineers, educators, athletes — they still want to grow in the faith.”

Father Meinrad is known for his singing voice, which intones the National Anthem at football games and leads liturgies at the Abbey. The whole interview (below) is worth a listen. He also covers his introduction of Communion and Liberation to campus, his thoughts on Benedictine spirituality, his embrace of a 12-step program to combat alcohol addiction, and his work with Mother Teresa and her sisters.