35 Years of Ravens Skipping Meals for Those in Need 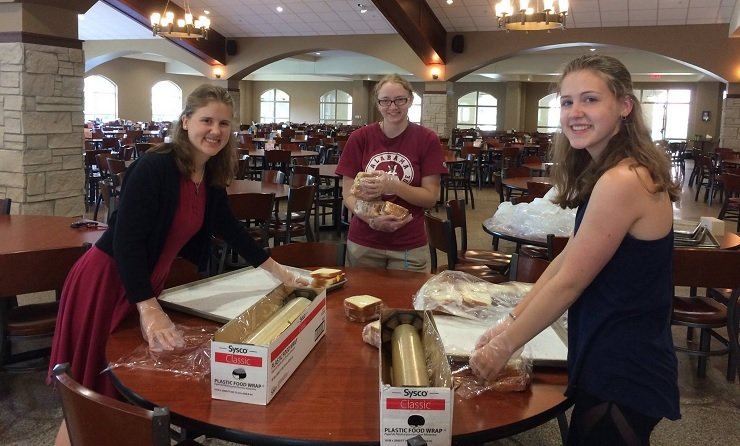 “For 35 years straight, the Hunger Coalition has assembled and delivered lunches each weekend — rain or shine, snow or ice — to individuals in the Atchison community who otherwise would have gone hungry. And it does so without spending a dime.”

That is how reporter Olivia Martin describes The Hunger Coalition, a club at Benedictine College in Atchison, Kansas, in an article in The Leaven newspaper.

She credits the “skip-a-meal model” in which students forgo dinner in the Dining Hall each Wednesday evening. The money from their meal plan goes to making meals for Atchison’s poor instead.

The program began in 1984, inspired by a visit to Atchison from Mother Teresa.

“We began with 20 people or so skipping meals,” the club’s founder, Benedictine College economist Dr. Rick Coronado, told The Leaven. “But now, we have 365 students skipping meals.”

“On Fridays, 10-15 students assemble the sack lunches, which consist of sandwiches, chips, cookies, fruit and juice,” reports Martin. “The next day, a small group of students with cars deliver the lunches across Atchison.”

Joseph Wurtz, Benedictine College dean of students, has been involved with Hunger Coalition since his undergraduate days in the 1990s, she reports. He still helps out in the club.

“It all started on a normal day walking into the dining hall,” Wurtz told The Leaven. “Some people asked me to join skip-a-meal. Then later, I began driving on the weekends for Hunger Coalition.”

“As Mother Teresa said when she visited [the college], he who serves the poor, serves God,” he added, “encountering the poor has you face hardships and realities that make you question a lot of things about your own humanity.

The article ends with a comment from Rick Coronado, who has led Hunger Coalition for 35 years: “It’s become a part of me.”

To read the entire article from the March 8 Leaven, click here.