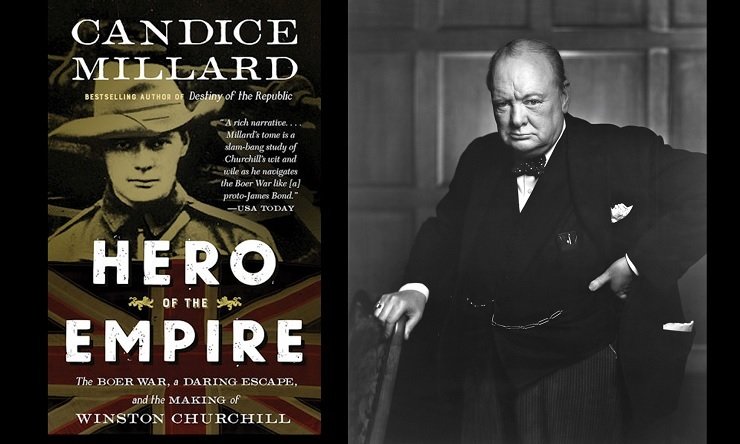 In a year of significant anniversaries, here are two more.

I started asking that question while reading Candice Millard’s fascinating account of a little-known event in Churchill’s youth, Hero of the Empire: The Boer War, a Daring Escape and the Making of Winston Churchill.

Millard, this fall’s Convocation speaker at Benedictine College in Kansas, where I work, has written a thrilling historical account chronicling the extreme bravery — and unapologetic snobbery — of Churchill as a young man.

The Churchill we meet in the book seems destined for greatness — but for himself, not God.

“I don’t like this fellow, but he’ll be Prime Minister of England one day,” Millard quotes Sir George White saying at one point.

The young Winston has a distaste for organized religion, saying he had his fill of it at Harrow School’s compulsory church services as a child.

At age 23, in the middle of a brief but blood-drenched military career that globe-trotted from conflict to conflict, he writes to his mother: “If the human race ever reaches a stage of development — when religion will cease to assist and comfort mankind — Christianity will be put aside as a crutch which is no longer needed, and man will stand erect on the firm legs of reason.”

His attitude changes dramatically two years later, when he finds himself alone and unarmed in enemy territory.

Though he was in the land of the Dutch Boers in 1899 as a war correspondent for the Daily Mail, Churchill’s spirited defense of an armored train lands him in a prisoner of war camp in an emptied-out boys’ school in Pretoria, the Boer capital.

He plots a daring escape from prison with two accomplices, but then blunderingly leaves them behind. The story of the escape is fascinating and exciting, and I won’t spoil it here.

Suffice it to say, though, that among the many preparations Churchill made, he left a few important matters unattended to: He had no compass, no food, no water, and no clue how he would traverse the 300 miles it would take to find a friendly border.

“As Churchill hid among the trees, a hunted man, the hopelessness and peril of his situation became almost too much to bear. His famously strident confidence had left him, leaving behind only the impossibility of finding his way to freedom, or even surviving the attempt,” writes Millard.

“Finally, desperate and nearly defeated, Churchill turned for hope and help to the only source he had left: his God.” He prayed “long and earnestly.”

Not long after Winston gets up from his knees, an extraordinary thing happens.

“His mind suddenly cleared. Just as unexpectedly as the cloud of confusion and doubt had descended on him, it lifted.”

Saying he acted in an “unconscious or subconscious manner” that he compared to a séance, Churchill strides confidently toward lights in the distance and knocks on the first door he comes to.

“By an incredible stroke of luck,” writes Millard, “Churchill had stumbled upon one of the few places in the 110,000 square miles of Transvall where it was still possible to find an Englishman.”

Through more adventures, including a rat-infested bedroom in a mine, near-misses and a perilous train ride, he escapes.

Churchill was indeed very lucky. Or was it something more?

Churchill later acknowledged that, “Without the assistance of that High Power which interferes in the eternal sequence of causes and effects more often than we are always prone to admit, I could never succeed.”

Some people unapologetically believe that Winston Churchill was chosen by God to save the Western World. In 2016, Churchill’s great-grandson Jonathan Sandys and Wallace Henley co-wrote God & Churchill: How the Great Leader’s Sense of Divine Destiny Changed His Troubled World and Offers Hope for Ours.

The book has been embraced by Evangelical Christians but was also featured in the Daily Beast. It sees God’s hand throughout Churchill’s life — and God’s absence in his enemies’ lives.

It quotes Winston at 16 saying: “This country will be subjected somehow to a tremendous invasion … I shall be in command of the defenses of London … it will fall to me to save the Capital, to save the Empire.”

Millard is rightly skeptical in her book about God’s intervention in battles.

She quotes the constant prayers of the oppressive, brutal, but very religious Boers.

Nevertheless, she defends Churchill’s faith, saying he “had room not only in his heart but in his mind for a God,” and quotes his change of heart: “It seemed good to let the mind explore so far as it could the paths of thought and logic, and also good to pray for help and succor, and be thankful when they came.”

Whether Churchill’s whole life was anointed or not, to this day he is celebrated for his singular contribution to Europe’s darkest hour.

“Winston Churchill was called by Almighty God,” said a eulogist at his funeral, ”to stand as our leader and our inspirer.”

Calling him a singular example of one man saving “the very spirit of human freedom,” he concluded, “We thank him, and we thank God for him.”

Particularly, we thank God for answering his prayer on a dark savanna in 1899.