A Religious People From the Beginning 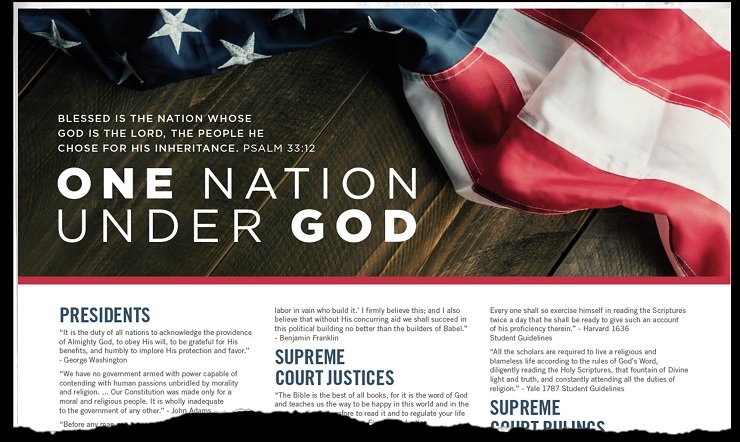 This is excerpted from an article at Kansas Monks.

When the founding fathers drew up the Constitution and Bill of Rights, the very first right they wanted to protect was the right to religious freedom. That is what the establishment clause and the free exercise clause of the First Amendment are all about: protecting religious freedom.

Hobby Lobby took out a full page ad on the Fourth of July in the Kansas City Star and other major papers.

It was all about “One Nation under God,” and there were extensive quotes from presidents, Supreme Court justices, and great patriots on the inter-connectedness of religion and the government. This nation was founded on Judeo-Christian principles, and is a Christian nation.

Religious freedom – the right to worship God according to one’s best conscience, to teach morality and the formation of character, and to bring your religious principles into the public square – all these were very important to the early American colonies and to our founding fathers.

But there has been a steady erosion of the protection of these rights by Supreme Court decisions since World War II. Secularists have cast a cloud of suspicion over religion. This skepticism has influenced the Supreme Court Justices and their rulings.

Today religion is marginalized — kept within the confines of churches and synagogues — and kept out of the public square, kept out of public schools and universities, and there is an effort to keep religion out of the public airwaves. Think of the Johnson Amendment barring the endorsement of political candidates by non-profit organizations.

All this is a serious violation of citizens’ right to religious freedom and their right to freedom of speech.

All this is completely contrary to the intent and meaning of the First Amendment. Citizens have a right to insist upon their civil rights, defined by the Constitution, and this includes their right to religious freedom and their right to freedom of speech.

New wine goes into new wineskins.  The reality of fermentation and wine remain the same, but the means for achieving this may change.  We make appropriate adaptations to preserve the basic articles of faith and morals in our Ffith, and we also find ways to retrieve our basic human rights, like religious freedom.