A Saint’s Heart Visits Campus: Is That Weird? 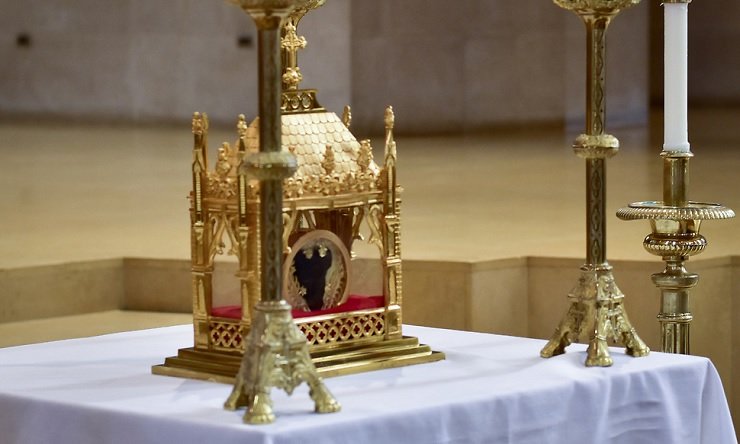 The incorrupt heart of St. John Vianney is available for veneration in its reliquary case at Benedictine College in the Abbey Church Monday, March 18, from 12:10 Mass until 10 p.m. Confessions will be provided.

Many Catholics are excited about this and will be visiting the Abbey all day. But some non-Catholics — and, truth be told, many Catholic — can be a little bit weirded out by Catholic veneration of relics. The arm of St. Francis Xavier or the head of St. Catherine Sienna or the heart of St. John Vianney — it seems morbid to pay so much attention to these things.

But if Catholics are odd to treat relics this way, then Scripture is odd in the same way.

In one Old Testament story, a body is being put in its tomb when it touches the bones of the prophet Elisha. “When the man came in contact with the bones of Elisha,” says the Second Book of Kings, “he came back to life and rose to his feet” (2 Kings 13:20-21).

In the Gospels, the woman with the hemorrhage was healed merely by touching the hem of Jesus’ cloak. “And Jesus, perceiving in himself that power had gone forth from him, immediately turned about in the crowd, and said, ‘Who touched my garments?’” (Mark 5:25-30).

In the Acts of the Apostles, people hoping for healing would line the streets with the sick so that when Peter passed by his shadow might touch them (Acts 5:12-15).

Also in the Acts of the Apostles, we read, “Meanwhile, God worked extraordinary miracles at the hands of Paul. When handkerchiefs or cloths which had touched his skin were applied to the sick, their diseases were cured and evil spirits departed from them” (Acts 19:11-12)

Companion of the Cross Father Carlos Martins, a Church-appointed Curate of Relics, pointed out to the Catholic News Agency that in each of these examples, God brings about healing using a material object.

However, “Relics are not magic. They do not contain a power that is their own; a power separate from God,” he said. “The cause of the healing is God; the relics are a means through which he acts.”

Today, Catholics generally venerate the same kinds of relics today that were mentioned in Scripture.

Relics have been venerated since the early days of the Church. The Acts of St. Polycarp, a text from 156 AD, declares: “We adore Christ, because he is the Son of God, but the martyrs we love as disciples and imitators of the Lord. So we buried in a becoming place Polycarp’s remains, which are more precious to us than the costliest diamonds, and which we esteem more highly than gold.”

The great St. Jerome (347-430) defended the veneration of relics in his Letter to Riparius:

“We do not worship relics, we do not adore them, for fear that we should bow down to the creature rather than to the creator. But we venerate the relics of the martyrs in order the better to adore him whose martyrs they are.”

If relics seem strange to modern Catholics, that’s okay. From gargoyles on cathedrals to chapels decorated with human bones, the Church is filled with customs and quirks that look harsh to the sensibilities of the modern secularist West. For that matter, our belief in the real presence of Jesus Christ in the Eucharist that we eat is out of step with what the world finds acceptable.

Relics don’t seem strange to people in many other cultures. In 2001, the Church sifted through popular devotions worldwide and presented acceptable ones in the Vatican’s Directory on Popular Piety.

• Care should be taken to determine the authenticity of relics;
• Relics should not be shards of bone but “of a sufficient size as make clear that they are parts of the human body”;
• It “admonish[es] the faithful to resist the temptation to form collections of relics.”

Then it approves of “The various forms of popular veneration of the relics of the Saints, such as kissing, decorations with lights and flowers, bearing them in processions,” and taking them to the sick and dying. In all cases, it stresses, their use “should be conducted with great dignity and be motivated by faith.”

It notes that the Second Vatican Council also approved of the veneration of relics (see No. 111 here).

So there is no need to worry. Catholics don’t worship relics any more than the woman with the hemorrhage worshiped Jesus’ cloak. We merely follow the example of Christians from the days of St. Paul and throughout the history of the Church who recognize that God has provided a special grace through the lives of the saints and the relics they leave behind.