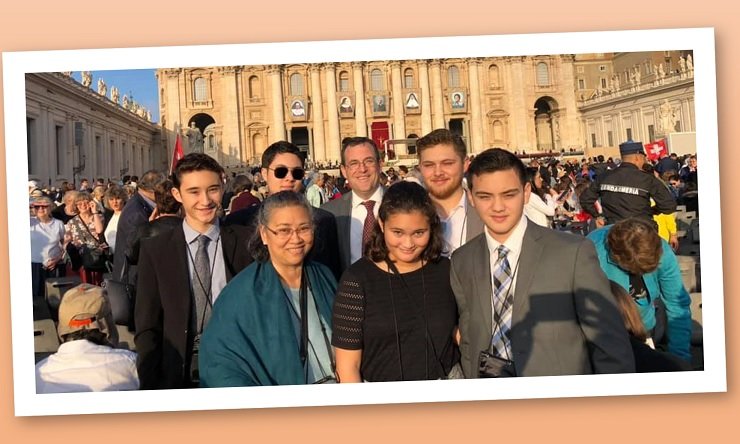 Ian Reilly, a sophomore Architecture major at Benedictine College in Atchison, Kansas, got to see the canonization of St. John Henry Newman on Oct. 13, 2019. His father is Patrick Reilly, President of the Cardinal Newman Society, so had attended the beatification of the saint as well. Ian is a Gregorian Fellow who was featured for his New York classical architecture program here.
What follows is Ian’s account of his trip to Rome.

The atmosphere in St. Peter’s Square, although packed with people, wasn’t chaotic but rather festive and excited. After making it through security, we found our seats. We were very fortunate to have a spot close to the front with a fantastic view.

My dad is the president of the Cardinal Newman Society, so naturally the canonization of Cardinal John Henry Newman was very important for our family. Having grown up hearing about Cardinal Newman and having attended his beatification in England when I was only nine years old, this trip was truly a special one.

The difficult part was that the dates for the trip lined up exactly with midterms week here at Benedictine College in Atchison, Kansas. Thankfully, all of my professors were extremely understanding, and were able to help me work around the trip, allowing me to complete most of my work early and helping me catch up when I returned.

Our trip to Rome was put together by the Cardinal Newman Society as part of a week-long pilgrimage. We toured the city with a group and a tour guide who was with us for the whole trip. We spent the first couple of days seeing the major sites in Rome. As an architecture major, the opportunity to see all these famous sites and their beautiful architecture was both incredible and educational.

The canonization itself was a truly once-in-a-lifetime experience. Pilgrims from every corner of the world were in Rome to see the canonization of Cardinal Newman and the four other saints who were canonized that day. We arrived in the morning to an already crowded St. Peter’s square.

Pope Francis celebrated Mass, along with what looked like hundreds of priests concelebrating. There was a beautiful choir performing the music, and even with all the people, the Mass was solemn and beautiful.  In his homily, the Pope said:

“Such is the holiness of daily life, which Saint John Henry Newman described in these words: ‘The Christian has a deep, silent, hidden peace, which the world sees not… The Christian is cheerful, easy, kind, gentle, courteous, candid, unassuming; has no pretense… with so little that is unusual or striking in his bearing, that he may easily be taken at first sight for an ordinary man.’”

When the Mass was over, the Pope passed through the crowds among shouts of excitement and people trying to get as close as possible to Pope Francis. We left St. Peter’s feeling awestruck, and thanking God for the wonderfully spiritual experience.

The remainder of our trip was spent touring the rest of Rome. My personal favorite was a private tour of the Vatican Museums and the Sistine Chapel. The amount of beautiful artwork and sculpture within the museum was truly amazing and more magnificent than any other museum I have visited.

I flew back to the United States and arrived on campus still feeling completely awestruck and thanking God for such an amazing opportunity.